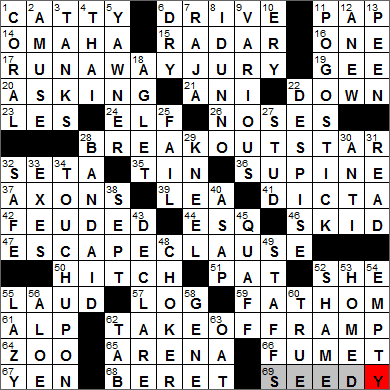 17A. John Cusack thriller based on a Grisham novel : RUNAWAY JURY
28A. Newly famous celebrity : BREAKOUT STAR
47A. Stipulation that frees one of liability : ESCAPE CLAUSE
62A. Part of a ski jump just before going airborne : TAKE-OFF RAMP

Today’s Wiki-est, Amazonian Googlies
Across
6. The “D” of PRNDL : DRIVE
PRNDL … that would be Park, Reverse, Neutral, Drive and Low.

11. Easy-to-chew food : PAP
One meaning of “pap” is soft or semi-liquid food for babies and small children. “Pap” comes into English via French, from the Latin word used by children for “food”. In the 1500s, “pap” also came to mean “an oversimplified” idea. This gives us a usage that’s common today, describing literature or perhaps TV programming that lacks real value or substance. Hands up those who think there’s a lot of pap out there, especially on television …

14. Mutual of ___ (insurance giant) : OMAHA
The insurance and financial services company called Mutual of Omaha was founded in 1909 as Mutual Benefit Health and Accident Association. Famously, Mutual of Omaha sponsored the television show “Wild Kingdom” from 1963 to 1988. “Mutual of Omaha’s Wild Kingdom” was resurrected in 2002 and can now be seen on the Animal Planet cable channel.

15. Aid in detecting speeders : RADAR
Scientists have been using radio waves to detect the presence of objects since the late 1800s, but it was the demands of WWII that accelerated the practical application of the technology. The British called their system RDF standing for Range and Direction Finding. The system used by the US Navy was called Radio Detection And Ranging, which was shortened to the acronym RADAR.

16. ___ Direction (boy band) : ONE
One Direction is a boy band that appeared on the British talent show “The X Factor” in 2010. Each of the band’s individual members had auditioned separately for the show and, once eliminated from the competition, got together and qualified for the “group” category of “The X Factor”.

17. John Cusack thriller based on a Grisham novel : RUNAWAY JURY
“Runaway Jury” is a 2003 thriller movie that is based on the excellent John Grisham novel of the same name. Both film and novel are about a gross negligence lawsuit taken out against a large company. In the novel, the suit is against big tobacco. The focus in the movie was changed to a suit against the firearms industry so as to avoid confusion with the 1999 whistleblower movie “The Insider”.

23. “___ Misérables” : LES
Victor Hugo’s famous 1862 novel “Les Misérables”, has been translated into English several times. However, the title is usually left in the original French as a successful translation of “les misérables” seems to be elusive. Some suggestions for an English title are “The Wretched”, “The Victims” and “The Dispossessed”.

37. Conductors of impulses from nerve cells : AXONS
A nerve cell is more correctly called a neuron, and the long nerve fiber that is part of a neuron is called the axon.

41. Judicial statements : DICTA
“Dictum” (plural “dicta”) is a legal term describing a statement by a court as part of a judgment.

42. Fought like the Hatfields and McCoys : FEUDED
The Hatfield and McCoy families of West Virginia and Kentucky were involved in a notorious feud that lasted from 1863 to 1891. The feud was somewhat resurrected in 1979 when representatives from both families appeared on the game show “Family Feud”. The McCoys came out ahead on TV and went home with over $11,000 and a pig.

44. Abbr. after a lawyer’s name : ESQ
The title “esquire” is of British origin and is used differently today depending on whether one is in the US or the UK. Here in America the term is usually reserved for those practicing the law (both male and female). In the UK, “esquire” is a term of gentle respect reserved for a male who has no other title that one can use. So a mere commoner like me might receive a letter from the bank say, addressed to W. E. Butler Esq.

57. Nautical record : LOG
The word “logbook” dates back to the days when the captain of a ship kept a daily record of the vessel’s speed, progress etc. using a “log”. A log was a wooden float on a knotted line that was dropped overboard to measure speed through the water.

59. Nautical unit of measure : FATHOM
Our word “fathom” comes from the Old English word used to describe the length of the outstretched arms. Today a fathom is equal to six feet.

64. Bronx ___ : ZOO
The Bronx Zoo is the largest metropolitan zoo in the country, and is located right on the Bronx River.

66. Strong, seasoned stock, in cookery : FUMET
A “fumet” is a fish or meat stock that is very strong in flavor and used as a base for sauces. “Fumet” is the French word for “aroma”.

67. Japanese money : YEN
The Korean Won, the Chinese Yuan, and the Japanese Yen (all of which are Asian currencies) take their names from the Chinese written character that represents “round shape”.

69. Run-down, as a bar : SEEDY
We use the word “seedy” to mean “shabby”. The usage probably arose given the appearance of a flowering plant that has gone to seed.

Down
1. Atoll composition : CORAL
Corals are invertebrates found in the sea that live in compact colonies. Some corals secrete calcium carbonate to form a hard exoskeleton, and these type of corals make up the basic infrastructure of coral reefs.

3. Oxygen suppliers for scuba divers : TANKS
Jacques-Yves Cousteau started off his career in the French Navy, aiming for a working life in aviation. Because of a car accident, Cousteau had to abandon his first career choice and instead went to sea. Famously, he invented the Self-Contained Underwater Breathing Apparatus (SCUBA), also called the aqualung.

11. Toy that hops : POGO STICK
What we know today as a pogo stick was invented in Germany by Max Pohlig and Ernst Gottschall. The name “pogo” comes from the first two letters in each of the inventors’ family names: Po-hlig and Go-ttschall.

13. Ball-___ hammer : PEEN
The peen of a hammer is on the head, and is the side of the head that is opposite the striking surface. Often the peen is in the shape of a hemisphere (as in a ball-peen hammer), but usually it is shaped like a claw (mainly for removing nails).

18. Shoelace end : AGLET
An aglet is the plastic or metal sheath that is found on the end of a shoelace or perhaps a drawstring. The name “aglet” comes from the Old French word “aguillette” meaning “needle”.

27. Macho sort : STUD
The word “stud”, meaning “a male horse kept for breeding”, is derived from the Old English word “stod” which described a whole herd of horses.

28. Quick but temporary fix : BAND-AID
“Band-Aid” is a brand name owned by Johnson & Johnson, although like many popular brands “band-aid” has become the generic term for an adhesive bandage, at least here in North America. The generic term we use in the British Isles for the same product is “plaster” …

38. Aug. follower : SEPT
The month of September is the ninth month in our year, although the name “September” comes from the Latin word “septum” meaning “seventh”. September was the seventh month in the Roman calendar until the year 46 BC when Julius Caesar introduced the Julian calendar. The Julian system moved the start of the year from March 1st to January 1st, and shifting September to the ninth month. The Gregorian calendar that we use today was introduced in 1582.

55. Indolent : LAZY
We usually use the word “indolence” these days to mean “habitual laziness”. We also use “indolent” to mean “causing very little pain”. The term derives from the Latin “indolentia” meaning “freedom from pain”. The jump to “laziness” took place in the 1700s. I think the idea is that when one is lazy, one avoids taking “pains”.

63. Grain in Cheerios : OAT
Cheerios breakfast cereal has the distinction of being the first oat-based cereal introduced into the market, hitting the grocery store shelves in 1941. Back then, “Cheerios” were known as CheeriOats.