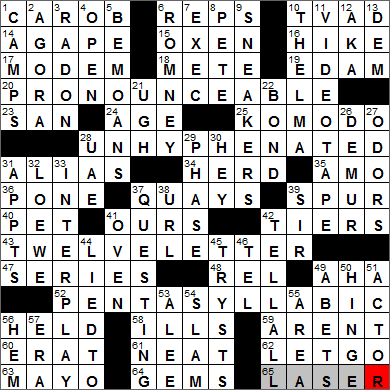 Today’s Wiki-est, Amazonian Googlies
Across
1. Ersatz cocoa : CAROB
The carob is a tree or shrub in the pea family, mainly grown for its seed pods. The carob seeds are dried or roasted, and when powdered or chipped make a good substitute for chocolate.

15. The yoke’s on them : OXEN
A yoke is that wooden beam used between a pair of oxen so that they are forced to work together.

17. Signal converter : MODEM
A modem is a device that is used to facilitate the transmission of a digital signal over an analog line. At one end of the line a modem is used to “modulate” an analog carrier signal to encode the the digital information, and at the other end a modem is used to “demodulate” the analog carrier signal and so reproduce the original digital information. This modulation-demodulation gives the device its name: a MOdulator-DEModulator, or “modem”.

19. Eponymic Dutch city : EDAM
Edam cheese takes its name from the Dutch town of Edam in North Holland. The cheese is famous for its coating of red paraffin wax, a layer of protection that helps Edam travel well and prevents spoiling. You might occasionally come across an Edam cheese that is coated in black wax. The black color indicates that the underlying cheese has been aged for a minimum of 17 weeks.

25. Island that’s home to the world’s largest lizard : KOMODO
The large lizard called a Komodo dragon is so named because it is found on the island of Komodo (and others) in Indonesia. It can grow to a length of over 9 1/2 feet, so I guess that explains the dragon part of the name …

31. 007, e.g. : ALIAS
James Bond was of course the creation of the writer Ian Fleming. Fleming “stole” the James Bond name from an American ornithologist. The number 007 was “stolen” from the real-life, 16th century English spy called John Dee. Dee would sign his reports to Queen Elizabeth I with a stylized “007” to indicate that the reports were for “her eyes only”.

36. Johnnycake : PONE
Pone is another word for corn bread, from the Powhatan word “apan” meaning “something baked”.

Johnnycake is a flatbread made from cornmeal that is associated with the Atlantic coast. There are claims that johnnycake originated in Rhode Island.

41. “One of ___” (1923 Pulitzer-winning novel by Willa Cather) : OURS
American novelist Willa Cather wrote what’s called the “prairie trilogy”, books that tell the story of Swedish immigrants living in Nebraska. The titles in the trilogy are “O, Pioneers!”, “The Song of the Lark” and “My Antonia”. Cather won the Pulitzer Prize for another novel, “One of Ours”, that is set in Nebraska and the French battlefields of WWI.

47. October event, informally, with “the” : SERIES
The first World Series of baseball in the so-called “modern” era was played in 1903, between the Pittsburgh Pirates of the National League and the Boston Americans (now the Red Sox) of the American League. Boston emerged victorious by five games to three.

60. Quod ___ demonstrandum : ERAT
QED is used at the end of a mathematical proof or a philosophical argument. The QED acronym stands for the Latin “quod erat demonstrandum” meaning “that which was to be demonstrated”.

63. Spread out in the kitchen? : MAYO
Mayonnaise originated in the town of Mahon in Menorca, a Mediterranean island belonging to Spain. The Spanish called the sauce “salsa mahonesa” after the town, and this morphed into the French word “mayonnaise” that we use in English today.

65. PowerPoint pointer : LASER
Given that PowerPoint is a Microsoft product, it is perhaps a bit of a paradox that the original application that became PowerPoint was designed for the Macintosh computer. This first release was called “Presenter”. The company that designed Presenter was purchased by Microsoft in 1987.

Down
2. Greek marketplace : AGORA
In early Greece the “agora” was a place of assembly. Often the assemblies held there were quite formal, perhaps for the reading of a proclamation. Later in Greek history, things became less formal as the agora evolved into a market place. Our contemporary word “agoraphobia” comes from these agorae, in the sense that an agoraphobe has a fear of open spaces, a fear of “public meeting places”.

3. Home inspector’s concern : RADON
Radon is a radioactive gas, a byproduct produced when uranium decays naturally in the earth. Radon gas can collect and accumulate in buildings and rooms that are particularly well insulated with very little air exchange. The danger is very real, as radon is listed as the second most frequent cause of lung cancer after cigarette smoke.

8. Officemate of Don and Peggy on “Mad Men” : PETE
On the AMC hit “Mad Men”, the character Pete Campbell is an ambitious account executive who works with Don Draper and Peggy Olson. Campbell is played by Vincent Kartheiser, Draper by Jon Hamm and Olson by Elizabeth Moss. For my money, Moss is the star of the whole show …

9. Jordans, e.g. : SNEAKERS
Air Jordan is Nike brand of shoe (and other apparel), endorsed by NBA great Michael Jordan. The silhouette of a basketball player that features on Air Jordans is known as the “jumpman” logo.

10. Pat Nixon’s given name : THELMA
Pat Nixon was the First Lady of the US from 1969 to 1974. Nixon was born in Ely, Nevada and named Thelma Catherine Ryan. Her Irish father gave her the nickname “Pat” because she was born on March 16th, the day before St. Patrick’s Day.

11. Outmoded rental : VIDEOTAPE
I still have a videotape rewinder sitting beside the television. How rarely it gets used today …

13. Blue: Abbr. : DEM
On political maps, red states are Republican and blue states Democrat. The designation of red and blue states is a very recent concept, only introduced in the 2000 presidential election by TV journalist, the late Tim Russert. In retrospect, the choice of colors is surprising, as in other democracies around the world red is usually used to describe left-leaning socialist parties (the reds under the bed!), and blue is used for conservative right-wing parties. In election cycles, swing/battleground states are often depicted in purple.

26. Show reluctance : DEMUR
“To demur” is to voice opposition, to object. It can also mean to delay and has it roots in the Latin word “demorare”, meaning “to delay”.

28. OPEC member: Abbr. : UAE
The United Arab Emirates (UAE) is a federation of seven emirates (states) in the Middle East. Included in the seven are Abu Dhabi and Dubai, with the city of Abu Dhabi being the UAE capital and cultural center.

32. Lerner’s partner on Broadway : LOEWE
Frederick Loewe was a composer best known for his collaborations with the lyricist Alan Jay Lerner, the most famous of which were “My Fair Lady” and “Camelot”.

45. Meetings probably not entered in P.D.A.’s : TRYSTS
In its most general sense, a tryst is a meeting at an agreed time and place. More usually we consider a tryst to be a prearranged meeting between lovers. The term comes from the Old French “triste”, a waiting place designated when hunting.

49. Assists, in a way : ABETS
The word “abet” comes into English from the Old French “abeter” meaning “to bait” or “to harass with dogs” (it literally means “to make bite”). This sense of encouraging something bad to happen morphed into our modern usage of “abet” meaning to aid or encourage someone in a crime.

51. Shakespeare, at times : ACTOR
Although William Shakespeare is known as a playwright and poet, he perhaps began his career as an actor in London. Shakespeare definitely acted in some of his own plays early in his career, as well as some plays by other playwrights of the period, and in particular those of Ben Johnson.

53. Sheltered : ALEE
“Alee” is the direction away from the wind. If a sailor points into the wind, he or she is pointing “aweather”.

54. Dis : SLAM
“Dis” is a slang term meaning “insult” that originated in the eighties, and is a shortened form of “disrespect: or “dismiss”.