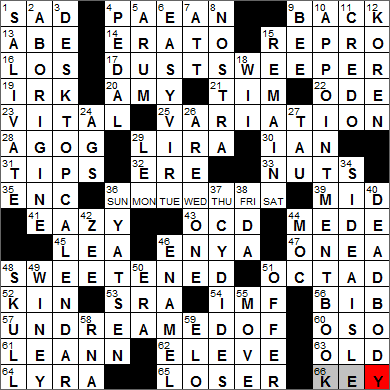 CROSSWORD SETTER: Jeffrey Wechsler
THEME: All the Time … we have a rebus puzzle today with the abbreviated days of the week in the middle, and some “days” references in the two longest answers:

Today’s Wiki-est, Amazonian Googlies
Across
4. Thanksgiving song : PAEAN
A paean is a poem or song that expresses triumph or thanksgiving. “Paean” comes from the ancient Greek “paian” meaning “song of triumph”.

13. Name that’s one syllable in English, two syllables in Japanese : ABE
Abe is a common family name in Japan, one that is ranked 23rd in frequency of occurrence in the population.

14. Sister of Melpomene : ERATO
In Greek mythology, the muses are the goddesses who inspire the creation of literature and the arts. The number of muses seems to be debated a lot, but the most popular view is that there are nine:

20. Literary March : AMY
“Little Women” is of course a novel written by American author Louisa May Alcott. The quartet of little women is Meg, Jo, Beth and Amy March. Jo is a tomboy and the main character in the story and is based on Alcott herself.

21. Comic Meadows formerly of “S.N.L.” : TIM
Tim Meadows is a comedian and actor who was a cast member on “Saturday Night Live” (SNL) from 1991 to 2000. That nine years is one of the longest tenures of any SNL cast member.

25. Basic process of genetics : VARIATION
Genetic variation is a fundamental behind the process of natural selection. Genetic variation is the result of mutations occurring in genes. If a mutation results in an individual that is more fit for survival, then the principle of “survival of the fittest” makes is more likely that the individual will mate. The mutation can then be passed onto offspring.

29. Currency superseded by the euro : LIRA
The word “lira” is used in a number of countries for currency. “Lira” comes from the Latin for “pound” and is derived from a British pound sterling, the value of a Troy pound of silver. For example, the lira (plural “lire”) was the official currency of Italy before the country changed over to the euro in 2002.

30. Actor McShane : IAN
Ian McShane is an English actor, famous in his homeland (and to PBS viewers in the US) for playing the title role in “Lovejoy”. In this country he is perhaps better known for playing the conniving saloon owner on the HBO western drama “Deadwood”.

41. Rapper ___-E : EAZY
Eazy-E was the stage name of rapper Eric Lynn Wright. Eazy-E had a pretty liberal lifestyle, fathering seven children with six different women. In 1995, he died due to complications from AIDS. He was only 32 years old.

43. Repetitive inits.? : OCD
Apparently obsessive-compulsive disorder (OCD) is the fourth most commonly diagnosed mental disorder, making it about as common as asthma.

44. Dweller in ancient Persepolis : MEDE
The Medes were an ancient people that lived in what is now northwestern Iran. The Medes held sway in the region only for about 60 years, until Cyrus the Great came along and defeated Astyages, the king of Media (not to be confused with Howard Stern, the self-proclaimed “king of all media”!).

Persepolis is located in modern Iran, just northeast of the city of Shiraz. The earliest remains of the city date back to around 500 BC. Much of the city’s construction took place during the reign of King Xerxes the Great.

46. Self-titled platinum album of 1986 : ENYA
Enya is a musician from County Donegal in the northwest of Ireland. She started out her musical career with her family band called Clannad, before going solo. Now Enya is Ireland’s best-selling solo musician.

47. Eligible to be called up : ONE-A
Class 1-A registrants in the Selective Service System maintained by the US government, are available for unrestricted military service.

51. Oxygen’s electrons, e.g. : OCTAD
The element oxygen has the atomic number of 8, and has eight elections within each atom.

54. Global economic org. : IMF
The International Monetary Fund (IMF) was established at the end of 1945 with 29 major economies supporting and funding an effort to stabilize economies across the globe after WWII. Headquartered in Washington, D.C., today the IMF has 187 member countries.

61. Singer Rimes : LEANN
LeAnn Rimes has been a country music star since she was 13 years old. In 2008 she disclosed publicly that she suffered from the autoimmune disease psoriasis. She has been active since then in raising money to fight the disease and helping fund cancer research as well. So, not only did Rimes win three Grammy Awards in 1997, she also won a 2009 Humanitarian Award from the Academy of Country Music.

62. Lycée attendee : ELEVE
The “lycée” is the last stage of secondary education in France.

French for school is “école”, and French for pupil is “élève”.

64. Constellation next to Hercules : LYRA
Lyra is a constellation that includes the star Vega, one of the brightest stars in the night sky. The constellation Lyra is surrounded by the neighboring constellations of Draco, Hercules, Vulpecula and Cygnus.

65. The hare, notably : LOSER
“The Tortoise and the Hare” is perhaps the most famous fable attributed to Aesop. The hare takes a nap during a race against the tortoise, and the tortoise sneaks past the finish line for the win while his speedier friend is sleeping.

Down
2. Native : ABORIGINE
Even though the term “aborigine” is often associated with the indigenous peoples of Australia, in the widest sense “aboriginal” refers to any indigenous race. The Aborigines were a people in Roman mythology, the oldest inhabitants of central Italy.

6. Noël Coward play : EASY VIRTUE
“Easy Virtue” is a play that Noël Coward wrote in 1924 that falls into the genre of drawing room melodrama. “Easy Virtue” was made into a silent film in 1928 by Alfred Hitchcock. Another movie version was made in 2008 with a great cast including Jessica Biel, Colin Firth and Kristin Scott Thomas. I recommend that one …

8. Cosa ___ : NOSTRA
Apparently “Cosa Nostra” is the real name for the Italian Mafia. “Cosa Nostra” translates as “our thing” or “this thing of ours”. The term first became public in the US when the FBI managed to turn some members of the American Mafia. The Italian authorities established that “Cosa Nostra” was also used in Sicily when they penetrated the Sicilian Mafia in the 1980s. The term “mafia” seems to be just a literary invention that has become popular with the public.

11. Inscription on stained glass, maybe : CREDO
“Credo” is the Latin word for “I believe”.

18. Xbox competitor : WII
The Wii is the biggest-selling game console in the world.

27. Leader of ancient Troy? : TAU
The Greek letter tau would be the leading letter in the word “Troy”.

36. Revered Chinese figure : SUN YAT-SEN
Sun Yat-sen is known as the “Father of the Nation” in China, and is uniquely revered in both the mainland of China and on the island of Taiwan. During his rule as president of the country he promoted his political philosophy known at the Three Principles of the People, namely nationalism, democracy and the people’s livelihood.

37. Athenian general who wrote “History of the Peloponnesian War” : THUCYDIDES
Thucydides was a historian from Ancient Greece who has been dubbed “the father of scientific history”, a nod to his rigorous gathering and analysis of evidence.

38. 2002 Salma Hayek film or its title role : FRIDA
Frida Kahlo was a Mexican painter, famous for her self-portraits. She was married to the equally famous artist Diego Rivera. Kahlo was portrayed by the actress Salma Hayek in a film about her colorful life called “Frida” released in 2002.