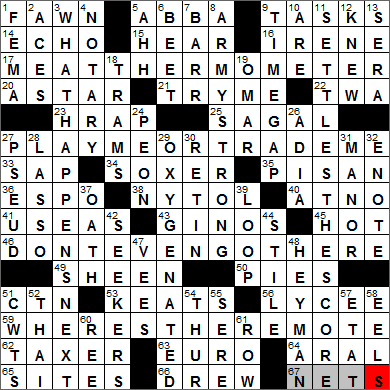 Today’s Wiki-est, Amazonian Googlies
Across
1. Forest newcomer : FAWN
A fawn is a young deer, often less than a year old.

5. Group whose last Top 40 hit was “When All Is Said and Done” : ABBA
I am an unapologetic fan of ABBA’s music. ABBA was of course the Swedish group who topped the charts in the seventies and eighties. The name ABBA is an acronym formed from the first letters of the given names of each of the band members, namely: Agnetha, Benny, Bjorn and Anni-Frid.

16. Nobel winner Joliot-Curie : IRENE
Along with her husband, Frederick, Irene Joliot-Curie was awarded the Nobel Prize for chemistry in 1935 for their discovery of artificial radioactivity. Irene was the daughter of Marie and Pierre Curie, who also won Nobel Prizes. Irene died when she was 58 years old, suffering from leukemia brought on her exposure to high doses of radiation. Her mother, Marie, died from aplastic anemia, also caused by high exposure to radiation. To this day, Marie’s personal papers are kept preserved in lead-lined boxes as they are highly radioactive, even her personal cookbook.

Sly and the Family Stone are a rock, funk and soul band from San Francisco that’s still performing today, although their heyday was from 1966 to 1983. They were one of the first rock bands to have a racially integrated lineup, as well as representatives of both sexes.

22. Old co. with overlapping globes in its logo : TWA
Trans World Airlines (TWA) was a big carrier in the US, but was perhaps even more recognized for its extensive presence in Europe and the Middle East. For many years, especially after the collapse of Pan-Am, TWA was considered the unofficial flag carrier for the US. The company started in 1930, the product of a forced merger of Transcontinental Air Transport and Western Air Express. The Transcontinental and Western Air that resulted (the original meaning of the acronym TWA) was what the Postmaster General wanted, a bigger airline to which the Postal Service could award airmail contracts.

25. Katey who portrayed TV’s Peg Bundy : SAGAL
Katey Sagal played Peggy Bundy on “Married … with Children”. Later she took over as star of the show “8 Simple Rules” in the middle of its run, when John Ritter passed away unexpectedly in 2003. More recently, Sagal has been appearing on the FX drama “Sons of Anarchy”. In 2004, she married Kurt Sutter who created the “Sons of Anarchy” series.

34. Bobby’s follower? : SOXER
Bobby socks (or “bobby sox”) are so called because they are shorter than knee socks, they are “bobbed”, shortened, as in a bob haircut.

35. Fibonacci, notably : PISAN
Leonardo of Pisa was a famous and respected Italian mathematician, also known as simply “Fibonacci”. He is remembered for writing about a number sequence (although he didn’t “discover” it) that later was given the name “Fibonacci sequence”. He wrote about the series of numbers in his book called “Liber Abaci”, a celebrated work that introduced Arabic numerals (i.e. 0-9) to the Western world.

38. Alternative to ZzzQuil : NYTOL
Nytol is a brand name for the drug diphenhydramine which is primarily used as an antihistamine. The drug also has a strong hypnotic effect and is used by some people as a non-prescription sleep aid.

40. Stat. for Re, La or Ti : AT NO
The atomic number of an element is also called the proton number, and is the number of protons found in the nucleus of each atom of the element.

Each chemical element has its own symbol. For example:

43. Papa ___ (Northeast pizza chain) : GINO’S
Papa Gino’s is a chain of American-style pizza restaurants in the northeast. The company is headquartered in Dedham, Massachusetts and was founded in Boston in 1961.

56. French class setting : LYCEE
The “lycée” is the last stage of secondary education in France.

62. Uncle Sam, say : TAXER
The Uncle Sam personification of the United States was first used during the War of 1812. The “Uncle Sam” term was so widely accepted that even the Germans used it during WWII, choosing the code word “Samland” for “America” in intelligence communiques.

63. One featuring a Maltese cross : EURO
Euro coins are issued by all the participating European states. The reverse side is a common design used by all countries, whereas the obverse is a design specific to each nation. For example, the one euro coin issued by Malta features the Maltese Cross. That Maltese euro is legal tender right across the eurozone.

64. Turkic word for “island” : ARAL
The Aral Sea is a great example of how man can have a devastating effect on his environment. In the early sixties the Aral Sea covered 68,000 square miles of Central Asia. Soviet Union irrigation projects drained the lake to such an extent that today the total area is less than 7,000 square miles, with 90% of the lake now completely dry. Sad …

66. Couldn’t discard in crazy eights, say : DREW
The card game called Crazy Eights originated in the 1940s. The game’s name comes from the term “Section 8”, which was a category of discharge from the US military used when a person was deemed mentally unfit for service.

67. Court suspensions : NETS
Basketball is truly an American sport. It was created in 1891 by a James Naismith at the YMCA in Springfield, Massachusetts. His goal was to create something active and interesting for his students in the gym. The first “hoops” were actually peach baskets, with the bottoms of the baskets intact. When a player got the ball into the “net”, someone had to clamber up and get the ball back out again in order to continue the game!

Down
1. Relief provider, for short : FEMA
Federal emergency management has been structured for over 200 years, but what we know today as the Federal Emergency Management Agency (FEMA) was created in 1979 in an Executive Order issued by President Jimmy Carter.

4. Sealing worker : NOTARY
A notary public is a public officer licensed to perform specific legal actions in non-contentious legal matters. The main duties are to administer oaths, take affidavits and witness the execution of documents.

8. Like G.I.’s, per recruiting ads : ARMY STRONG
The current recruiting slogan used by the US Army is “Army Strong”, replacing “Army of One” in 2006. Prior to that “Be All You Can Be” had been the army’s slogan for more than twenty years.

13. They may be used in veins : SERA
Blood serum is the clear, yellowish part of blood i.e. that part which is neither a blood cell or a clotting factor. Included in blood serum are antibodies, the proteins that are central to our immune system. Blood serum from animals that have immunity to some disease can be transferred to another individual, hence providing that second individual with some level of immunity. Blood serum used to pass on immunity can be called “antiserum”.

18. They may be used around veins : TRAMS
The railcars used for transportation of ore in mines are called trams.

24. Drone : PEON
A peon is a lowly worker with no real control over his/her working conditions. The word comes into English from Spanish where it has the same meaning.

26. 1998 hit from the album “Surfacing” : ADIA
Apparently the song “Adia”, co-written by Sarah McLachlan, was intended as an apology to her best friend … for stealing her ex-boyfriend and then marrying him!

29. Like some hemoglobin : OXYGENATED
Hemoglobin is the key protein in red blood cells. Hemoglobin transports oxygen around the body, and also carbon dioxide.

30. ___-A : RETIN
Retin-A is a brand name for the drug Tretinoin, the acid form of vitamin A that is used to treat acne.

44. Revolving feature : STILE
A stile is a structure allowing people to pass over or through a fence, while at the same time preventing livestock from escaping.

52. Whence the word “bong” : THAI
A “bong” is a smaller and more portable version of a “hookah”, with both being filtration devices for smoking especially tobacco and cannabis. The term “bong” comes from the Thai word “baung” that is used for a wooden pope cut from bamboo.

57. Indiana, e.g., to Lafayette : ETAT
In French, a state (état) is a political division (division politique).

The Marquis de Lafayette was a French military officer who fought in the American Revolutionary War, as well as having a notable career back in France. But, his links to America were strong, so that when he died in 1834, he was buried in Paris under soil transported from the Revolutionary War battlefield at Bunker Hill.

58. Some use electric organs : EELS
Electrophorus electricus is the biological name for the electric eel. Despite its name, the electric “eel” isn’t an eel at all, but rather what is called a knifefish, a fish with an elongated body that is related to the catfish. The electric eel has three pairs of organs along its abdomen, each capable of generating an electric discharge. The shock can go as high as 500 volts with 1 ampere of current (that’s 500 watts), and that could perhaps kill a human.

60. River Shannon’s Lough ___ : REE
Lough Ree is the second largest lake on the River Shannon in Ireland, with the largest being Lough Derg. “Lough” is the Irish word for “lake”.

61. Sudoku segment : ROW
“Sudoku” is a Japanese word meaning “single number”. No doubt many of you are fans. I know I am …