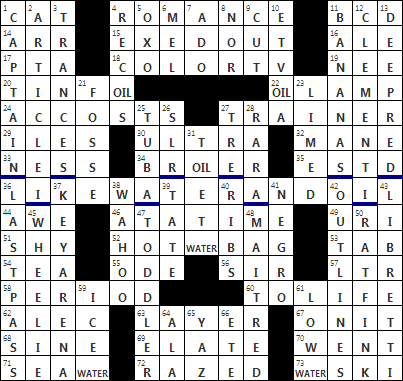 CROSSWORD SETTER: George Barany & Michael Shteyman
THEME: Like Oil and Water … we have a rebus puzzle today, with a twist. Some squares contain the word OIL in the upper half of the grid, and some squares the word WATER. There is a dividing line across the center of the grid (where there is no mix, LIKE OIL AND WATER). The long down-clues have answers separated not by black squares, but by thick lines in the grid that represent the dividing line between the OIL at the top and the WATER at the bottom. George Barany kindly provided a link to a colored version of the grid to further illustrate what’s going on:

63A. Either the top or bottom half of this puzzle, figuratively speaking : LAYER
36A. Incompatible : LIKE WATER AND OIL

Today’s Wiki-est, Amazonian Googlies
Across
11. A train? : BCD
The letters BCD follow like a “train” after the letter A, in the alphabet.

16. Falstaff’s quaff : ALE
Sir John Falstaff is the lead character in Shakespeare’s “The Merry Wives of Windsor” and a supporting character in the two “Henry IV” plays. Falstaff is a self-promoting, obese and cowardly man. In “King Henry IV, part I”, Falstaff refers to his portly size, saying, “thou seest I have more flesh than another man, and therefore more frailty.”

18. Living room fixture since the ’50s : COLOR TV
The first national broadcast of a color television program in the US was the Tournament of Roses Parade in 1954. That said, it was another decade before color broadcasts became relatively common, and color television sets began to sell in large numbers.

19. Born : NEE
“Née” is the French word for “born” when referring to a female. The male equivalent is “né”.

20. Food wrap : TIN FOIL
Before thin sheets of aluminum metal was available, thin sheets of tin were used in various application. Tin foil isn’t a great choice for wrapping food though, as it imparts a tinny taste. On the other side of the pond, aluminum foil has a different name. No, it’s not just the different spelling of aluminum (“aluminium”). We still call it “tin foil”. You see, we live in the past …

22. Light for Aladdin : OIL LAMP
“Aladdin” is a famous tale in the “Arabian Nights”, also called “The Book of One Thousand and One Nights”. However, there is no evidence at all that the story was in the original collection. It is generally believed that one Antoine Galland introduced the tale when he translated the “Arabian Nights” into French in the early 1700s.

29. Makeup of les Caraïbes : ILES
In French, the Caribbean (les Caraïbes) is made up of many islands (îles).

44. Cow, perhaps : AWE
The verb “to cow” means to intimidate, to scare. The exact etymology of the term seems unclear.

49. Sch. with a campus in Providence : URI
The University of Rhode Island (URI) was first chartered as an agricultural school, back in 1888. URI’s main campus today is located in the village of Kingston, with smaller campuses in Providence, Narragansett and West Greenwich.

53. Computer key : TAB
Like most features on our computer keyboards, the tab key is a hangover from the days of typewriters. When using a typewriter, making entries into a table was very tedious as it involved lots of tapping on the spacebar and backspace key. So, a lever was added to typewriters that allowed the operator to “jump” across the page to positions that could be set by hand. Later this was simplified to a tab key, which could be depressed causing the carriage to jump to the next tab stop in much the same way that the modern tab key works on a computer.

55. Poetic paean : ODE
A paean is a poem or song that expresses triumph or thanksgiving. “Paean” comes from the ancient Greek “paian” meaning “song of triumph”.

56. Alfred Hitchcock title : SIR
Alfred Hitchcock is an English film director from Leytonstone, just outside London. A very good friend of mine is a close friend of one of Hitchcock’s granddaughters, and met him many times in her youth. She tells a very nice story of sitting in a restaurant with the family when someone came over to the table to say “hi”. That was Jimmy Stewart …

68. Kind of wave : SINE
A sine wave is a mathematical function that describes a simple, smooth, repetitive oscillation. The sine wave is found right throughout the natural world. Ocean waves, light waves and sound waves all have a sine wave pattern.

72. Bulldozed : RAZED
The term “bulldoze” comes from the noun “bulldose”, which meant “a severe beating” back in the late 1800s. A bulldose was “a dose fit for a bull”, a beating designed to intimidate mainly black Republican voters in the 1876 US presidential election.

Down
1. ___ America : CAPTAIN
Captain America is a fictional superhero in comics published by Marvel Comics. He is the alter ego of a physically weak man called Steve Rogers who was given an experimental serum by the US Government during WWII.

2. It gives Congress the power to declare war : ARTICLE I
Article I of the US Constitution calls out the powers and limitations on the legislative branch of the government, the US Congress.

5. Tic-tac-toe loser : OXO
When I was growing up in Ireland we played “noughts and crosses” … our name for the game tic-tac-toe.

6. Blanc who voiced Bugs Bunny : MEL
Mel Blanc was known as “The Man of a Thousand Voices”. We’ve all heard Mel Blanc at one time or another, I am sure. His was the voice behind such cartoon characters as Bugs Bunny, Daffy Duck, Porky Pig, Tweety Bird, Woody Woodpecker, Elmer Fudd and Barney Rubble. And the words on Blanc’s tombstone are … “That’s All Folks”.

7. Foofaraw : ADO
“Foofaraw” is excessive or flashy ornamentation, or a fuss over something that is unimportant.

8. King Harald’s land: Abbr. : NOR
Harald III was King of Norway from 1046 to 1066. Harald III also laid claim to the English throne and in 1066 invaded England. Ultimately, the invasion was unsuccessful and Harald himself was killed at the Battle of Stamford Bridge. The victorious English forces were led by Anglo-Saxon King Harold II. However, the English king did not have long to enjoy his victory as he immediately had to march his army to the south to meet an invasion by William the Conqueror, the leader of the Normans. Famously, Harold II lost to the Normans and was himself killed in the Battle of Hastings, just three weeks after successfully fighting off Harald III.

11. Fruit or nuts : BANANAS
Bananas are a type of fruit, and “bananas” is a term meaning “nuts”.

12. Fourth pope : CLEMENT I
The first five popes of the Roman Catholic Church were:

21. “All That Jazz” director : FOSSE
Bob Fosse won more Tony Awards for choreography than anyone else, a grand total of eight. He also won an Oscar for Best Director for his 1972 movie “Cabaret”, even beating out the formidable Francis Ford Coppola who was nominated that same year for “The Godfather”.

23. Treated, in a way, as a lawn : LIMED
Agricultural lime is a soil additive made from pulverized limestone or chalk, both of which contain calcium carbonate as a main component. One of the main purposes of “liming” is to increase the pH of acidic soil.

25. Big band member : TUBA
The tuba is the lowest pitched of all the brass instruments, and one of the most recent additions to the modern symphony orchestra (usually there is just one tuba included in an orchestral line-up). “Tuba” is the Latin word for “trumpet, horn”.

26. Camera type, briefly : SLR
SLR stands for “single lens reflex”. Usually cameras with changeable lenses are the SLR type. The main feature of an SLR is that a mirror reflects the image seen through the lens out through the viewfinder, so that the photographer sees exactly what the lens sees. The mirror moves out of the way as the picture is taken, and the image that comes through the lens falls onto unexposed film, or nowadays onto a digital sensor.

“Ciao” is the Italian for “‘bye”. “Arrivederci” is more formal, and translates better as “goodbye”.

37. Seattle Center Coliseum, since 1995 : KEYARENA
KeyArena at Seattle Center is home to the men’s basketball team of Seattle University and the Seattle Storm of the WNBA. The arena is also home to the Rat City Rollergirls flat-track roller derby team.

38. Rebel yell : WAHOO!
The “rebel yell” was used by confederate soldiers to intimidate the enemy and boost morale during battle.

39. London gallery : TATE
The museum known as “the Tate” is actually made up of four separate galleries in England. The original Tate gallery was founded by Sir Henry Tate as the National Gallery of British Art. It is located on Millbank in London, on the site of the old Millbank Prison, and is now called Tate Britain. There is also the Tate Liverpool in the north of England located in an old warehouse, and the Tate St. Ives in the west country located in an old gas works. My favorite of the Tate galleries is the Tate Modern which lies on the banks of the Thames in London. It’s a beautiful building, a converted power station that you have to see to believe.

41. Rio ___ (Amazon feeder) : NEGRO
The Rio Negro (Spanish for “black river”) is a tributary of the Amazon in South America. The Rio Negro is the largest blackwater river in the world. A blackwater river is a slow-moving waterway that flows through forestation, collecting decaying vegetable matter that turns the water to a dark coffee color.

42. Silhouettes : OUTLINES
A silhouette is an outline, usually of a person’s profile, which has been filled in with a solid color. One theory is that the term comes from the name of the French Minister of Finance in 1759, Étienne de Silhouette. The minister was ,ade major cutbacks in spending to finance the Seven Years War, cutbacks that were not popular with the citizenry. His name was used for a “silhouette” because it was a cheap way of making someone’s likeness.

43. Opera texts : LIBRETTI
“Libretto” is the diminutive form of “libro”, the Italian word for a book. We use “libretto” (plural “libretti”) to mean the text used in a musical work, or perhaps the “book” of that musical work.

48. Two- or four-seater, maybe : MAITRE D’
I guess the idea is that a maitre d’ often has to seat two or four people …

The full name of a “maître d’” is “maître d’hôtel”, which means “master of the hotel”.

50. Snitch : RATFINK
Ratfink is a slang term used in North America for a really obnoxious person, especially someone who has “squealed, spilled the beans”.

65. Longtime Red Sox nickname : YAZ
Yaz is the nickname for Carl Yastrzemski, a baseball player who spent his whole career with the Boston Red Sox.

66. Somme summer : ETE
The Somme is a river in the north of France. The name “Somme” comes from a Celtic word meaning “tranquility”. Paradoxically, the Somme is remembered as the site of a devastating WWI battle. The river separated British and French forces from the German army from July to November 1916. By the end of the battle, over one million soldiers had been wounded or killed.