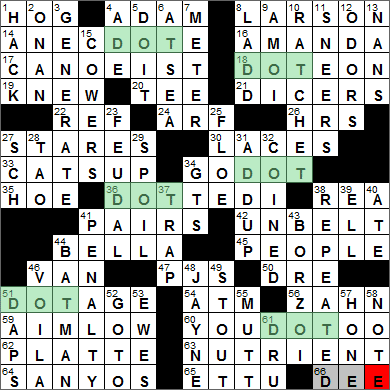 CROSSWORD SETTER: Elizabeth A. Long
THEME: Dot Over the I … there are six letters I in today’s grid, and right above them are 6 DOTs:

36A. Lowercase letter illustrated six times in this puzzle? : DOTTED I

Today’s Wiki-est, Amazonian Googlies
Across
1. Harley, e.g. : HOG
“Hog” is a nickname for a Harley-Davidson motorcycle.

The Harley-Davidson motorcycle company was started up in the very early 1900s by two childhood friends, William Harley and Arthur Davidson, . Their first design was in effect an engine hooked up to a pedal bicycle, but the 116 cc cylinder capacity simply couldn’t generate enough power to get up the hills of their native city of Milwaukee. The pair came up with a redesigned model that had a cylinder capacity of 405 cc, which the partners built in a shed at the back of Davidson’s house. In 1906, the partners built their first factory, located where the company’s headquarters is to this day, on Juneau Avenue in Milwaukee, Wisconsin.

8. Cartoonist who said “I don’t read or watch TV to get ideas. My work is basically sitting down at the drawing table and getting silly” : LARSON
Gary Larson is the cartoonist behind the marvelous series called “The Far Side”. Larson retired in 1995, and so we’ve had to entertain ourselves with “The Far Side” reruns since then.

21. Kitchen gizmos : DICERS
The word “gizmo” (also “gismo”) was originally slang used by both the US Navy and the Marine Corps, but the exact origin seems unknown. Nowadays, “gizmo” is a general term used for a device or a part when the correct name escapes one (so I use it a lot …). Oh, and Gizmo is the name of the dog belonging to my son and his fiancee.

22. Bartlett’s, e.g. : REF
“Bartlett’s Familiar Quotations” is a popular reference work containing tons of quotations. Bartlett’s was first issued in 1855, and as such is the longest-lived collection of quotations that we have available to us. The book started as a private list of quotes gathered by John Bartlett who ran the University Bookstore in Cambridge, Massachusetts. He kept the list as he was always being asked “who said?” by customers.

33. Hunt’s production : CATSUP
“Catsup” is an American spelling of “ketchup” that is sometimes used, especially in the south of the country.

The term “ketchup” may be of Chinese origin. One suggestion is that the name comes from “kôe-chiap”, meaning the brine of pickled fish. The name may also come from the Chinese “jyutping”, meaning “tomato sauce”.

34. What some waiters never see? : GODOT
An Irishman I may be, but I have sat through so many Samuel Beckett plays (the Irish dramatist) and I have yet to come away feeling satisfied that I spent my time well. Of course I am in the minority, as his play “Waiting for Godot” was once voted the most significant English language play of the 20th century. Maybe I will try again one day …

38. Actor Stephen : REA
Stephen Rea is an actor from Belfast in Northern Ireland. Rea’s big break in movies came with his role in the 1992 film “The Crying Game”, a role for which he was nominated for the Best Actor Oscar.

46. Lead : VAN
The term “vanguard” comes to us from French, and describes the foremost position in an advancing army or navy. The term derives from “avant-garde” meaning “advance guard”. “Vanguard” is sometimes shortened to “van”, as in “in the van” meaning “in the lead”.

47. Slumber party togs : PJS
Our word “pajamas” comes to us from the Indian subcontinent, where “pai jamahs” were loose fitting pants tied at the waist and worn at night by locals and ultimately by the Europeans living there. And “pajamas” is another of those words that I had to learn to spell differently when I came to America. In the British Isles the spelling is “pyjamas”.

50. Rap’s Dr. ___ : DRE
Dr. Dre is the stage name of rapper Andre Romelle Young. Dr. Dre is known for his own singing career as well as for producing records and starting the careers of others such Snoop Dogg, Eminem and 50 Cent.

56. Newswoman Paula : ZAHN
Paula Zahn resigned as an anchor with CNN in 2007. Outside of her work in journalism, Zahn is an accomplished cellist and has played at Carnegie Hall with the New York Pops Orchestra.

62. River to the Missouri : PLATTE
The Platte River used to be called the Nebrakier, which is an Oto word meaning “flat river”. Indeed, the state of Nebraska takes its name from “Nebrakier”. For a while it was also called the River Plate as “plate” is the French word “flat”. Later this became “Platte”, the phonetic spelling of the French “plate”.

64. Some plasma TVs and digital cameras : SANYOS
Sanyo is a Japanese electronics manufacturer based near Osaka and founded in 1947. The company name means “three oceans” reflecting the company’s original aim to sell its products all around the world (across three oceans: the Atlantic, the Pacific and the Indian).

Plasma televisions are so called because the screen is made up tiny cells containing electrically charged ionized gases (plasmas). Each of the cells is effectively a tiny fluorescent lamp.

65. Roman rebuke : ET TU
It was Shakespeare who popularized the words “Et tu, Brute?” (And you, Brutus?), in his play “Julius Caesar”, although the phrase had been around long before he penned his drama. It’s not known what Julius Caesar actually said in real life just before he was assassinated on the steps of the Senate in Rome.

Down
6. Flummoxed : AT SEA
Flummoxed is another lovely word, meaning confused or perplexed. It is probably of English origin, derived from some local dialect.

8. “Charlie’s Angels” actress : LADD
Cheryl Ladd’s most famous role was that of Kris Monroe in television’s “Charlie’s Angels”. Ladd replaced Farrah Fawcett-Majors when the latter opted out of the show. Cheryl Ladd was the daughter-in-law of famed Hollywood actor Alan Ladd, as she was married to Ladd’s son, David. After the couple divorced, Cheryl retained the Ladd name.

When the TV show “Charlie’s Angels” started airing in the mid-seventies it was a little unusual in that it featured three women playing private detectives, a role usually reserved for men. The name first chosen for the show was “The Alley Cats”, then “Harry’s Angels”, before finally settling on “Charlies Angels”.

10. Wheel with sloped teeth : RATCHET
In a ratchet, there’s a rotating gear over which runs a spring-loaded finger, the piece of metal that makes the clicks as the gear rotates. That finger is called a “pawl”.

13. Indian breads : NANS
Naan (also “nan”) bread is very popular in Indian restaurants, as well as in other West, Central and South Asian cuisines. Indian Naan is traditionally baked in a clay oven known as a tandoor.

23. Like England in the Middle Ages : FEUDAL
Feudalism was a legal and military system that flourished in medieval Europe. Central to the system were the concepts of lords, vassals and fiefs. Lords would grant fiefs (land or rights) to vassals in exchange for allegiance and service.

25. Arctic ice : FLOE
An ice floe is a sheet of ice that has separated from an ice field and is floating freely on the ocean.

28. Subject of meditation : TAO
The Chinese character “tao” translates as “path”, but the concept of Tao signifies the true nature of the world.

37. Part of a drain : TRAP
Most sinks in a home have a P-trap in the outlet pipe that empties into the sewer line. This P-trap has at its heart a U-bend that retains a small amount of water after the sink is emptied. This plug of water serves as a seal to prevent sewer gases entering into the home. By virtue of its design, the U-bend can also capture any heavy objects (like an item of jewelry) that might fall through the plughole. But the “trapping” of fallen objects is secondary to the P-traps main function of trapping of sewer gases.

48. Old-time actress Meadows : JAYNE
Jayne Meadows was an American actress and television personality. Meadows was married to Steve Allen, with whom she sometimes appeared as a panelist on the TV show “What’s My Line?”

51. Fist-bumps : DAPS
The dap is a form of handshake, nowadays often a complicated and showy routine of fist-bumps, slaps and shakes. Some say that “dap” is an acronym standing for “Dignity And Pride”.

53. Female Cotswolds : EWES
Cotswolds are a breed of sheep that originated in the Cotswold Hills in England.

55. Kennel club reject, no doubt : MUTT
The original use of the term “mutt” was for a foolish person, and was probably short for “muttonhead”. The usage evolved into today’s “mongrel dog”.

57. Sharpen : HONE
“To hone” is to sharpen, a verb derived from the noun “hone” A “hone” is a whetstone used in sharpening.

61. “___ Hill,” 1996 platinum album : DRU
Dru Hill is an R&B singing group from Baltimore, Maryland. Dru Hill was formed in 1992, and is still going strong today. The name “Dru Hill” comes from Druid Hill Park which is found on the west side of Baltimore.