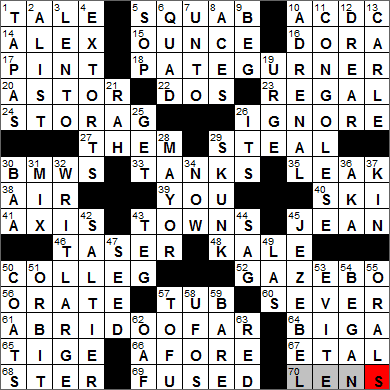 CROSSWORD SETTER: Victor Barocas
THEME: Get Different … today’s themed answers all feature the letters GET, but we are told to treat those letters specially in the grid. We either write the letters GET upwards, downwards, backwards or eliminate them altogether:

5. Alternative to a game hen : SQUAB
A squab is a young domestic pigeon. Squab served as food is usually a pigeon that has been raised to a month old and then slaughtered.

10. Young brothers’ band : AC/DC
The Heavy Metal band known as AC/DC was formed by two brothers Malcolm and Angus Young in Australia. The group is usually called “Acca Dacca” down under.

14. “A Clockwork Orange” protagonist : ALEX
“A Clockwork Orange” is a novella by Anthony Burgess, first published in 1962. The story is about a young teenager named Alex, who leads a small gang on violent rampages each night. The story has been adapted for the big and small screens, most famously in a 1971 film by Stanley Kubrick. It’s way too violent for me …

16. Explorer with a friend named Boots : DORA
“Dora the Explorer” is a cartoon series shown on Nickelodeon. Part of Dora’s remit is to introduce the show’s young viewers to some Spanish words and phrases.

20. New York City’s ___ Place : ASTOR
Astor Place is a neighborhood around a two-block street in Manhattan, New York City that bears the same name. Astor Place is named for John Jacob Astor who was once the richest person the country.

John Jacob Astor was the father of the famous American Astor dynasty. He was the country’s first multi-millionaire, having made his fortune in the trade of fur, real estate and opium. In today’s terms, it has been calculated that by the time of his death he had accumulated a fortune big enough to make him the fourth wealthiest man in American history (in the company of the likes of Andrew Carnegie, Cornelius Vanderbilt, Bill Gates, Henry Ford and John D. Rockefeller).

22. Two in Toledo : DOS
Toledo is a city in central Spain.

30. 6 Series cars : BMWS
The acronym BMW stands for Bayerische Motoren Werke, which translates into Bavarian Motor Works. BMW was making aircraft engines during WWI, but had to cease that activity according to the terms of the Treaty of Versailles. The company then started making motorcycles, and then moved into automobile production starting in 1928. BMW moved back into aircraft engine manufacturing during the build-up of the Luftwaffe prior to WWII.

You don’t know about me without you have read a book by the name of The Adventures of Tom Sawyer; but that ain’t no matter.

“The Adventures of Huckleberry Finn” by Mark Twain was first published in 1884, not here in the US but rather in England. The original launch planned for the US had to be delayed until the following year because some rascal had defaced the plate for one of the illustrations, making an obscene joke. Once the problem was spotted a new plate had to be made, and 30,000 copies already printed had to be reworked to cover up the obscenity.

45. Actress Stapleton : JEAN
Archie Bunker’s wife, Edith, was played by Jean Stapleton on the 1970s sitcom “All in the Family”. By 1980, Stapleton was growing tired of playing the role and appeared in fewer and fewer episodes. When the show’s spin-off series “Archie Bunker’s Place” premiered, the storyline revealed that Archie Bunker had just lost his wife, setting the tone for the new show.

46. Mall cop weapon : TASER
Victor Appleton wrote a novel for young adults called “Tom Swift and His Electric Rifle”. The company that developed the TASER electroshock weapon named its product as a homage to the novel. The acronym TASER stands for “Thomas A. Swift’s Electric Rifle”.

50. Amherst and Orono, for two [“Get up!”] : COLLEGE TOWNS (with GET written upwards in the grid)
The University of Massachusetts Amherst (UMass) is the largest public university in New England. UMass was founded back in 1863, although it took a while to get the school into service. Construction work was delayed and the college went through two presidents before William S. Clark took charge. He cracked the whip, completed the construction and enrolled the first students in the same year that he took over the reins, in 1867. As a result, although Clark was the third President of UMass, he is regarded by most as the school’s founding father.

52. Where Maria and the Captain have their first kiss in “The Sound of Music” : GAZEBO
A gazebo is a roofed structure, often octagonal in shape, that is found mainly in public spaces. Gazebos can be quite small, or can be large enough to perhaps serve as a bandstand. The actual etymology of the term “gazebo” seems to be a bit of a mystery, and there are some misconceptions out there.

64. Nickname for Anaheim’s Angel Stadium : BIG A
Angel Stadium of Anaheim is sometimes called the Big A. The Big A opened for business in 1966, making it the fourth oldest stadium in the major leagues, after Fenway Park, Wrigley Field and Dodger Stadium.

65. Buster Brown’s dog : TIGE
“Buster Brown” was a comic strip created in 1902 by Felton Outcault. Outcault took his name Buster from the very popular film star at the time, Buster Keaton. Buster’s dog Tige, was an American Pit Bull Terrier. Apparently when Tige started to “talk” in the strip, he became the first talking pet in American comics.

Down
1. Spanish starters : TAPAS
“Tapa” is the Spanish word for “lid”, and there is no clear rationale for why this word came to be used for an appetizer. There are lots of explanations cited, all of which seem to involve the temporary covering of one’s glass of wine with a plate or item of food to either preserve the wine or give one extra space at the table.

3. Slowly : LENTO
A lento passage is a piece of music that has a slow tempo.

5. Concession : SOP
Cerberus is a dog with three heads that appears in both Greek and Roman mythology. Cerberus had the job of guarding the gates of Hades and preventing those who had crossed the River Styx from ever escaping. A sop is a piece of food that has been dipped in some liquid, as one might sop a piece of bread in soup. There is an idiomatic expression, “to give a sop to Cerberus”, which means to give someone a bribe, or pay someone off. The idea is that if one could bribe Cerberus, give him a sop to eat, then he would let you pass and escape from Hades.

7. Golden rule word : UNTO
The Golden Rule is also known as the ethic of reciprocity, and is a basis for the concept of human rights. A version of the rule used in the Christian tradition is attributed to Jesus:
Do unto others as you would have them do unto you.

10. ___ gland : ADRENAL
The adrenal glands, as one might expect from the name, sit on top of the kidneys. Their main function is to secrete hormones that have a role to play in times of stress, the best-known of which is epinephrine (aka adrenaline).

28. Cleveland was one in Buffalo : MAYOR
Grover Cleveland is the only person to have served as US President in two non-consecutive terms, and is sometimes referred to as our 22nd and 24th president. Prior to taking the nation’s highest office, Cleveland served as Governor of New York, Mayor of Buffalo and Sheriff of Erie County.

34. First word of “Richard III” : NOW
“Richard III” is one of the more famous of William Shakespeare’s historical plays. A well-known 1955 version of the play was made for the big screen with Laurence Olivier playing the title role. The most oft-quoted words from “Richard III” are probably the opening lines “Now is the winter of our discontent/Made glorious summer by this sun of York”, and Richard’s plea at the climax of battle “A horse, a horse, my kingdom for a horse!”

45. Prominent feminist blog : JEZEBEL
Jezebel.com is a blog focused on women’s interests. The site was launched in 2007 and uses the tagline “Celebrity, Sex, Fashion for Women. Without Airbrushing”.

49. Velázquez’s “___ Meninas” : LAS
“Las Meninas” is a painting by Diego Velázquez, the name of which translates to “The Maids of Honor”. “Las Meninas” is the most famous painting owned by the Museo del Prado in Madrid.

Diego Velázquez was a Spanish painter during the Baroque period. He was a member of the court of King Philip IV in the first half of the 17th century, and as such was commissioned to paint many portraits and scenes of historical importance.

53. What you might get for a party nowadays : EVITE
An “evite” is an “electronic invitation”.

57. Tasteless stuff : TOFU
Tofu is another name for bean curd, and is a Japanese word meaning just that … bean that has “curdled”. Tofu is produced by coagulating soy milk, using either salt or something acidic. Once the protein has coagulated, the curds are pressed into the familiar blocks. Personally I love tofu, but my wife, she absolutely hates it …

58. Subjects of some 911 calls : UFOS
In 1952, the USAF revived its studies of reported sightings of unidentified flying objects (UFOs) in a program called Project Blue Book. Project Blue Book ran from 1952 until it was shut down in 1969 with the conclusion that there was no threat to national security and that there were no sightings that could not be explained within the bounds of modern scientific knowledge.

The first use of an emergency phone number nationally was in the UK in 1937, where the number 999 was introduced to call emergency services. If you need emergency services in the UK or Ireland to this day, you have to dial 999. It’s not really clear why 911 became the emergency number in the US. The most credible suggestion (to me) is that when it was introduced by the FCC in 1967, it was a number that “fit” with the numbers already used by AT&T for free services (211-long distance; 411-information; 611-repair service).

62. Clodhopper : OAF
Our term “clodhopper” is used to describe a clumsy and coarse person. Back in the 1600s, a clodhopper was someone who worked on plowed land.