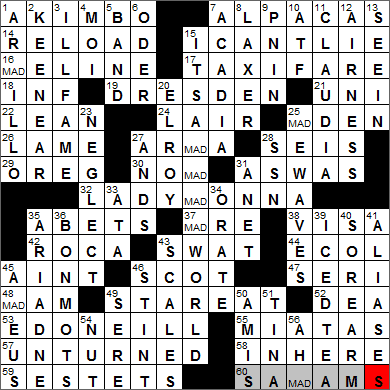 Today’s Wiki-est, Amazonian Googlies
Across
1. One way to stand : AKIMBO
Akimbo is such a lovely word, I think (as in “arms akimbo”). I failed to dig up anything too exciting about the term’s etymology. It seems to stem from Middle English, “in kekbowe” or “on kenbow” meaning “bend in a curve”.

7. Sources of wool : ALPACAS
Alpacas are like small llamas, but unlike llamas were never beasts of burden. Alpacas were bred specifically for the fleece. As such, there are no known wild alpacas these days, even in their native Peru.

16. Title girl in a children’s book series set in Paris : MADELINE
The “Madeline” series of children’s books was written by Austrian author Ludwig Bemelmans, with the first story published in 1939. The books center on a young Parisienne called Madeline, a redheaded 7-year-old attending a Catholic boarding school.

17. Meter reading : TAXI FARE
We call cabs “taxis”, a word derived from “taximeter cabs” that were introduced in London in 1907. A taximeter was an automated meter designed to record distance travelled and fare to be charged. The term “taximeter” evolved from “taxameter”, with “taxa” being Latin for “tax, charge”.

18. Like the first two “Brandenburg” Concertos : IN F
The six beautiful Brandenburg Concertos were composed by Johann Sebastian Bach and presented to the Margrave of Brandenburg-Schwedt in 1721.

19. City known as “Florence on the Elbe” : DRESDEN
The German city of Dresden was almost completely destroyed during WWII, especially as a result of the famous firebombing of the city in 1945. Restoration work in the inner city in recent decades led to it being designated as a UNESCO World Heritage Site However, in 2006 when the city built a highway bridge close to the city center, UNESCO took Dresden off the list. This marked the only time a European location has lost World Heritage status. That said, the city is sometimes called “Elbflorenz” (Florence of the Elbe) in honor of the city’s architecture, art collections and museums.

25. Sportscaster who lent his name to a popular video game series : MADDEN
Retired sportscaster John Madden is a former NFL footballer and Super Bowl-winning coach. Famously, Madden has a fear of flying and so he travels around the country on “the Madden Cruiser”, a customized coach that he started using in 1987. Madden actually lives about a mile from me and we used to see the Madden Cruiser filling up with provisions at our grocery store all the time. Even though he is afraid to fly, John’s wife Virginia actually has her private pilot’s license.

27. Fleet : ARMADA
The most famous Armada was the Spanish fleet that sailed against England in order to overthrow Queen Elizabeth I in 1588. It failed in its mission, partly due to bad weather encountered en route. Ironically, the English mounted a similar naval attack against Spain the following year, and it failed as well.

32. 1968 Beatles hit : LADY MADONNA
The 1968 Beatles hit “Lady Madonna” was the last song the band recorded before starting their own Apple Records label. The song’s lyrics mention every day of the week except Saturday. Paul McCartney admitted in an interview that the omission was a mistake, and one that he and John Lennon only noticed after the song was recorded.

35. Backs, as a front : ABETS
The word “abet” comes into English from the Old French “abeter” meaning “to bait” or “to harass with dogs” (it literally means “to make bite”). This sense of encouraging something bad to happen morphed into our modern usage of “abet” meaning to aid or encourage someone in a crime.

38. Big name in plastic : VISA
Did you know that Visa doesn’t issue any credit cards? Visa just sells the electronic systems and infrastructure to banks who then put the Visa logo on their own cards so that both the customer and merchant know to use the VISA system when making a transaction.

47. Golfer ___ Pak : SE-RI
Se-Ri Pak is a South Korean golfer playing on the LPGA tour. Having a Korean name, we really should be calling her Pak Se-Ri as she is known in her homeland. Korean names always start with the family name.

53. “Modern Family” actor : ED O’NEILL
Ed O’Neill made it big on television playing Al Bundy on the sitcom “Married … with Children”, not a show I ever cared for. However, O’Neill is in the cast of a great show currently being aired that I do recommend, namely “Modern Family”.

55. Boxster competitors : MIATAS
I’ve always liked the looks of the Mazda Miata, probably because it reminds me so much of old British sports cars. The Miata is built in Hiroshima, Japan.

The Boxster is a roadster built by Porsche that was introduced in 1996. The name “Boxster” comes from a melding of “boxer” and “roadster”. A “boxer” engine (or “flat” engine) is one in which the pistons move in a horizontal plane, with the cylinders laid out in two rows opposing each other.

59. Sonnet enders : SESTETS
A sestet is a group of six lines of poetry similar to a quatrain, a group of four lines.

60. Corona alternative : SAM ADAMS
Samuel Adams was one of the Founding Fathers of the United States, from Boston Massachusetts. Adams followed his father into the family’s malthouse business a few years after young Samuel graduated from Harvard. There were generations of Adams family members who were “maltsters” i.e. those producing malt needed for making beer. Samuel Adams is often described as a brewer, but he was actually a malster. The Samuel Adams brand of beer isn’t directly associated with the Adams family, but it is named in honor of the patriot.

Down
1. Carrier of plates? : ARMADILLO
The nine-banded armadillo is the most commonly found species of armadillo found in the Americas. The “bands” are bits of armor that circle the body of the armadillo, although there are not always nine of them, but usually seven to eleven.

6. River through Pomerania : ODER
The Oder river rises in the Czech Republic, and forms just over a hundred miles of the border between Germany and Poland.

The European region known as Pomerania lies on the south shore of the Baltic Sea, straddling the border between Germany and Poland. The name “Pomerania” comes from the Slavic for “Land at the Sea”.

7. “Evangeline” locale : ACADIA
The great explorer Verrazzano gave the name “Arcadia” to the coastal land that stretched from north of present day Virginia right up the North American continent to Nova Scotia. The name Arcadia was chosen as it was also the name for a part of Greece that had been viewed as idyllic from the days of classical antiquity. The “Arcadia” name quickly evolved into the word “Acadia” that was used locally here in North America. Much of Acadia was settled by the French in the 1600s, and then in 1710 Acadia was conquered by the British. There followed the French and Indian War after which there was a mass migration of French Acadians, often via the French colony of Saint-Dominique (present-day Haiti) to the French colony of Louisiana. The local dialectic pronunciation of the word “Acadian” was “Cajun”, giving the name to the ethnic group for which Louisiana has been home for about 300 years.

“Evangeline, A Tale of Acadie” is an epic poem by Henry Wadsworth Longfellow, first published in 1847. Nowadays we tend to think first of “Hiawatha” when we see the name Longfellow, but within his own lifetime “Evangeline” was Longfellow’s most famous work. The poem tells the tale of Evangeline Bellefontaine who is separated from her beloved when the Acadians were forcibly removed from their land by the British.

9. Nabokov novel after “Lolita” : PNIN
“Pnin” is a novel written in English by Vladimir Nabokov, and published in 1957. The title character is Timofey Pnin, a Russian-born professor living in the US. “Pnin” raised some money for Nabokov, as it was published in installments in “The New Yorker” magazine. He needed the money while he worked hard to find someone to publish his more edgy novel, “Lolita”.

11. Italian actress Cardinale : CLAUDIA
Claudia Cardinale is an actress from Italy (although born in Tunisia). who appeared mainly in European films in the sixties and seventies. Cardinale’s best known performances to North American audiences are probably in “Once Upon a Time in the West” (1968) and “The Pink Panther” (1963).

12. Nickname for Michael Jordan, with “His” : AIRNESS
Michael Jordan is considered by many to be the greatest basketball player of all time. Not only is he a talented sportsman, but he is also very successful in the business world. His is now the majority owner of the Charlotte Bobcats NBA team.

15. 1963 movie with the tagline “Everybody who’s ever been funny is in it!” : IT’S A MAD, MAD, MAD, MAD WORLD
“It’s a Mad, Mad, Mad, Mad World” is a 1963 comedy film with quite the cast. The list of great comedic actors appearing seems to be endless and includes: Sid Caesar, Mickey Rooney, Buddy Hackett, Jonathan Winters, Milton Berle, Ethel Merman, Spencer Tracy, Terry-Thomas, Phil Silvers, Jim Backus, Jimmy Durante and Peter Falk. In addition, there were cameo appearances by Jack Benny, Buster Keaton, Don Knotts, Carl Reiner, the Shirelles and the Three Stooges. I can’t remember any other movie with such a cast …

20. The Jetson boy : ELROY
On the cartoon show “The Jetsons”, young Elroy wore a cap with an antenna sticking out of it.

28. Nine-digit ID : SSN
A Social Security number (SSN) is divided into three parts i.e AAA-GG-SSSS, Originally, the Area Number (AAA) was the code for the office that issued the card. Since 1973, the Area Number reflects the ZIP code from which the application was made. The GG in the SSN is the Group Number, and the SSSS in the number is the Serial Number. However, this is all moot, as since 2011 SSN’s are assigned randomly.

35. Titian subject with Bacchus : ARIADNE
“Bacchus and Ariadne” is an oil painting by Italian Renaissance painter Titian that can be seen in the National Gallery in London.

36. Witticisms : BON MOTS
“Bon mot” translates from French as “good word”. We use “bon mot” (and sometimes just “mot”) to mean a quip, a witticism.

41. George Eliot and George Sand : ALIASES
George Eliot was the pen name of English novelist Mary Anne Evans. As one might think, Evans chose a male pen name in order that her work might be best appreciated in the Victorian era. Eliot wrote seven novels including “Adam Bede” (1859), “The Mill on the Floss” (1860), “Silas Marner” (1861) and “Middlemarch” (1871-72).

George Sand was the pseudonym of the very colorful French novelist Baroness Dudevant. Along with the renown that she garnered for her novels, Sand was also known for celebrated affairs with the likes of Frédéric Chopin.

50. Marseille mates : AMIS
Marseille (often written “Marseilles” in English) is the second largest city in France, after Paris. Marseille is also the largest commercial port in the country. I used to live nearby, and it’s a lovely, lovely place.