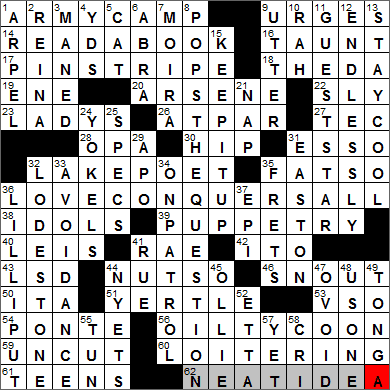 CROSSWORD SETTER: Bruce Haight
THEME: Happy Valentine’s Day … we have a mini-theme to suit the day, with two “loving” answers crossing at the center of the grid:

Today’s Wiki-est, Amazonian Googlies
Across
1. Bivouac, maybe : ARMY CAMP
A “bivouac” is a temporary camp out of doors. The term comes to us via French from the Swiss/Alsatian word “biwacht” meaning “night guard”. The original bivouac was a group of soldiers camped out as a night guard.

18. 1970s NBC courtroom drama : THE DA
“The D.A.” is a courtroom drama that originally aired in the early seventies on NBC. Star of the show was Robert Conrad who played a Deputy District Attorney.

19. Tacoma-to-Spokane dir. : ENE
Tacoma is a city on Puget Sound in the state of Washington. The city took its name from Mount Rainier that is nearby, as the peak used to be known as Mount Tahoma.

Back in 1974, Spokane in Washington was the smallest city ever to host a World’s Fair. The theme of the fare was “the environment”, which I suppose was ahead of its time. Notably, Expo ’74 was the first American-hosted World’s Fair attended by the Soviet Union after WWII.

20. Lupin of fiction : ARSENE
Arsène Lupin is a character created by the French writer Maurice Leblanc. Leblanc was writing in the days of Sir Arthur Conan Doyle, and his gentleman detective Lupin is as popular in the French-speaking world as Sherlock Holmes is in English.

26. Bond phrase : AT PAR
Stocks, and other financial vehicles, may be sold “at par”, meaning at the original price, not discounted nor at a premium.

28. Gramps, to Günter : OPA
In Germany, a grandfather might be called “Opa”, and grandma would be known as “Oma”.

31. Standard offspring : ESSO
The brand name Esso has its roots in the old Standard Oil company as it uses the initial letters of “Standard” and “Oil” (ESS-O). The Esso brand was replaced by Exxon in the US, but ESSO is still used in many other countries.

32. Wordsworth or Coleridge : LAKE POET
The Lake Poets were a group of Romantic poets who lived in the Lake District of northern England in the late 1800s and early 1900s. The three most prominent members of the group were William Wordsworth, Samuel Taylor Coleridge and Robert Southey.

The great English poet William Wordsworth is intrinsically linked with the Lake District in the north of England, where he lived from much of his life. The Lake District is a beautiful part of the country, and I’ve been fortunate enough to visit Dove Cottage in Grasmere a couple of times, where Wordsworth lived with his wife Dorothy …

Samuel Taylor Coleridge was a pioneer for the Romantic Movement in England, along with his friend William Wordsworth. Coleridge’s most famous works are “The Rime of the Ancient Mariner” and “Kubla Khan”, my wife’s favorite poem.

36. Phrase from Virgil appropriate for Valentine’s Day : LOVE CONQUERS ALL
“Omnia vincit amor” is a line from Eclogue X, one of the major works of the Latin poet Virgil. We know the phrase in English as “love conquers all”.

Publius Vergilius Maro (better known as Virgil) was a poet from Ancient Rome. His best known works are:

40. Gifts of flowers : LEIS
“Lei” is the Hawaiian word for “garland, wreath”, although in more general terms a “lei” is any series of objects strung together as an adornment for the body.

41. Carly ___ Jepsen, singer with the 2012 album “Kiss” : RAE
Carly Rae Jepsen is a singer/songwriter from Mission, British Columbia. Jepsen got her start on TV’s “Canadian Idol” when she placed third in the show’s fifth season.

42. Yamaguchi’s 1992 Olympics rival : ITO
Midori Ito is a Japanese figure skater. Ito was the first woman to land a triple/triple jump and a triple axel in competition. In fact she landed her first triple jump in training when she was only 8 years old …

Kristi Yamaguchi is a figure skater, an Olympic champion in 1992. She is quite the dancer too, having won “Dancing with the Stars” in 2008. Yamaguchi started skating and taking ballet as a young child as physical therapy, as she had club feet …

43. Agent of psychedelic therapy : LSD
LSD (colloquially known as “acid”) is short for lysergic acid diethylamide. A Swiss chemist called Albert Hofmann first synthesized LSD in 1938 in a research project looking for medically efficacious ergot alkaloids. It wasn’t until some five years later when Hofmann ingested some of the drug accidentally that its psychedelic properties were discovered. Trippy, man …

51. Dr. Seuss title character : YERTLE
“Yertle the Turtle” is a story by Dr. Seuss. The book is noted for the inclusion of the word “burp”, which back in 1958 when it was published, was considered to be vulgar. But no one seemed to mind!

53. Liquor letters : VSO
Cognac is a famous variety of brandy named after the town of Cognac in the very west of France. To be called cognac, the brandy must be distilled twice in copper pot stills and aged at least two years in very specific French oak barrels. It is the length of this aging that defines the various grades of cognac (and other brandies):

54. ___ Vedra Beach, Fla. : PONTE
The community of Ponte Vedra Beach in Florida is located on the Atlantic coast just east of Jacksonville and north of St. Augustine. Golf is a big deal in Ponte Vedra Beach and it is home to the Tournament Players Club at Sawgrass, the PGA Tour headquarters.

Down
1. Adrien of cosmetics : ARPEL
The Adrien Arpel cosmetic company was founded in 1962 and sold its products across Europe. The company started selling in the US in 1968.

4. P.G.A. stat : YDS
The Professional Golfers’ Association (PGA) was founded in 1916 and today has its headquarters (unsurprisingly) in Florida, where so many golfers live. Back in 1916, the PGA was based in New York City.

6. Magical opener : ABRA-
The incantation “abracadabra” has a long history. It was used as far back as the 2nd century AD in Ancient Rome when the word was prescribed by a physician to be worn on an amulet to help his emperor recover from disease. “Abracadabra” is Aramaic, and roughly translates as “I will create as I speak”.

7. Fate personified, in mythology : MOIRA
The three Fates of Greek mythology were white-robed deities, and were also called the Moirai. The three Fates were Clotho the spinner, Lachesis the allotter and Atropos the unturnable.

8. Delivers a romantic Valentine’s Day surprise, maybe : POPS THE QUESTION
Saint Valentine’s Day was chosen by Pope Gelasius I in 496 AD to honor various martyrs with the name Valentine. However, the saints’ day was dropped by the Catholic church in 1969, by Pope Paul VI. Try telling that to Hallmark though …

31. Home of Lafayette College : EASTON
The Lehigh Valley metropolitan area in Pennsylvania is primarily composed of the three cities, Allentown, Bethlehem and Easton.

Lafayette College in Easton, Pennsylvania was founded in 1826 and was named after the Revolutionary War officer, General Lafayette of France.

32. It was used to make the first compass : LODESTONE
Magnetite is a form of iron oxide ore, a valuable source of iron. It is the most magnetic of all known minerals, hence the name. Pieces of magnetite called lodestone were used in ancient times to study the property of magnetism.

36. Fictional island with a small population : LILLIPUT
In the 1726 adventure novel “Gulliver’s Travels” by Jonathan Swift, Gulliver comes across the two islands of Lilliput and Blefuscu in the South Indian Ocean. Both are inhabited by people who are one-twelfth of “normal” size, so Gulliver appears like a giant to them. “Gulliver’s Travels” is well known for its satirical references to real life, and indeed these two islands are poorly disguised satires of Britain (Lilliput) and France (Blefuscu). The two islands were at war, as was constantly the situation with Britain and France.

37. Prefix with -graph : EPI-
In the world of literature, an epigraph is a few words at the beginning of a composition that sets forth a theme, perhaps a quotation. The term “epigraph” can also be used for an inscription on maybe a building or a statue.

41. Paris’s ___ La Fayette : RUE
Rue La Fayette is a street on the Right Bank of the River Seine in Paris. The street is named for the Marquis de La Fayette who played an important role in the American War of Independence.

47. Like Humpty Dumpty : OVOID
Humpty Dumpty is a character in a nursery rhyme, actually an egg although that isn’t specifically called out in the original rhyme:

48. Me.-to-Fla. route : US-ONE
US Route 1 runs from Fort Kent in Maine right down to Key West in Florida.

49. The Friendly Islands : TONGA
The Kingdom of Tonga is made up of 176 islands in the South Pacific, 52 of which are inhabited and scattered over an area of 270,000 square miles. Tonga was given the name Friendly Islands in 1773 when Captain James Cook first landed there, a reference to the warm reception given to the visitors.

52. First name in blues : ETTA
Etta James was best known for her beautiful rendition of the song “At Last”. Sadly, as she disclosed in her autobiography, James lived a life that was ravaged by drug addiction leading to numerous legal and health problems. Ms. James passed away in January 2012 having suffered from leukemia.