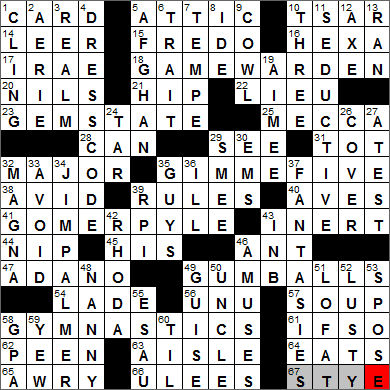 18A. Poacher’s nemesis : GAME WARDEN
23A. Idaho’s nickname : GEM STATE
35A. Request for some skin : GIMME FIVE!
41A. Mayberry resident who became a Marine : GOMER PYLE
49A. Round candy in a vending machine : GUMBALLS
58A. Sport that includes the pommel horse and parallel bars : GYMNASTICS

Today’s Wiki-est, Amazonian Googlies
Across
10. Old Russian autocrat : TSAR
The term czar (also tsar) is a Slavic word that was first used as a title by Simeon I of Bulgaria in 913 AD. “Czar” is derived from the word “Caesar”, which was synonymous with “emperor” at that time.

14. Lothario’s look : LEER
There is a character Lothario in Don Quixote, and in the “Fair Penitent”, a 1703 play by Nicholas Rowe. In both cases the Lothario in question exhibits less than wholesome behavior towards a woman, giving rise to the term “lothario” meaning a “roue”.

15. The middle Corleone brother : FREDO
Fredo Corleone is a middle son in the Corleone family that features in Mario Puzo’s “The Godfather”. He was considered the weak son, and was reduced to the role of “gopher”. Fredo was with his father when Don Corleone was shot, and although he tried to retaliate as the shooting took place, he dropped his gun. On the screen, Fredo was played by Italian-American actor John Cazale.

17. “Dies ___” (Latin hymn) : IRAE
“Dies Irae” is Latin for “Day of Wrath”. It is the name of a famous melody in Gregorian Chant, one that is often used as part of the Roman Catholic Requiem Mass.

20. Guitarist Lofgren of the E Street Band : NILS
The musician Nils Lofgren was a member of Bruce Springsteen’s E Street Band for over 25 years. Lofgren provided vocals and played guitar, and was hired as the replacement for Steven Van Zandt.

23. Idaho’s nickname : GEM STATE
Idaho has the nickname the Gem State, mainly because almost every known type of gemstone has been found there. Idaho is also sometimes called the Potato State as potatoes are such a popular crop in the state.

25. Muslim pilgrim’s destination : MECCA
Mecca is in the Makkah province of Saudi Arabia and is the holiest city in Islam. Every year several million Muslims perform the Hajj, a holy pilgrimage to Mecca.

28. Pringles container : CAN
Pringles snack chips were introduced in 1967 by Procter & Gamble and were first sold as “Pringles Newfangled Potato Chips”.

35. Request for some skin : GIMME FIVE!
The celebratory gesture that we call a “high five” is said to have been invented by former baseball players Dusty Baker and Glenn Burke when they were both playing for the Los Angeles Dodgers in the later 1970s.

38. Gung-ho : AVID
“Kung ho” is a Chinese expression meaning “work together, cooperate”. The anglicized version “gung ho” was adopted by a Major Evans Carlson as an expression of combined spirit for his 2nd Marine Raider Battalion during WWII. From there the term spread throughout the Marine Corps and back to America where it persists to this day.

41. Mayberry resident who became a Marine : GOMER PYLE
Jim Nabors was discovered by Andy Griffith and brought onto “The Andy Griffith Show” as Gomer Pyle, the gas station attendant. Of course, Nabors then got his own show, “Gomer Pyle, U.S.M.C.” Gomer had a cousin on the “The Andy Griffiths Show” called Goober Pyle. Goober was played by George Lindsay. Lindsay had auditioned for the Gomer part, but that went to Nabors.

47. Hersey’s “A Bell for ___” : ADANO
“A Bell for Adano” is a novel written by John Hersey. Hersey’s story is about an Italian-American US Army officer, Major Joppolo, who found a replacement for a town’s bell stolen by fascists. “A Bell for Adano” was made into a film in 1945, the same year the novel won a Pulitzer.

54. Stow, as cargo : LADE
The verb “lade” meaning “to load” comes from an Old English word “hladan”. Lade also used to mean “to draw water” and indeed gave us our word “ladle”. So “lade” and “ladle” are close cousins.

57. Campbell’s product : SOUP
The Campbell’s Soup company is named for one of the enterprise’s two founders, Joseph A. Campbell. He and Abraham Anderson started the business in 1869. The iconic design of the Campbell’s can was introduced in 1989 and has hardly changed since then. The gold seal in the design comes from the 1900 Paris Exhibition.

62. Round hammer part : PEEN
The peen of a hammer is on the head, and is the side of the head that is opposite the striking surface. Often the peen is in the shape of a hemisphere (as in a ball-peen hammer), but usually it is shaped like a claw (mainly for removing nails).

66. “___ Gold” (Peter Fonda film) : ULEE’S
“Ulee’s Gold” is a highly respected film from 1997 in which Peter Fonda plays the title role of Ulee. Ulee’s “gold” is the honey that Ulee produces. It is a favorite role for Peter Fonda and he has shared that playing Ulee brought to mind his father, Henry Fonda, who himself kept a couple of hives. So if you see Peter Fonda in “Ulee’s Gold” you’re witnessing some characteristics that Peter saw in his father.

Down
5. Kabul native : AFGHAN
Kabul is the capital and largest city of Afghanistan. The city has been the site of major conflict for much of the 3,500 years that it has been in existence. In the past this conflict was mainly driven by the city’s strategic location on the major trade routes of south and central Asia.

7. City near Phoenix : TEMPE
Tempe is a city in the metropolitan area of Phoenix. The city is named for the Vale of Tempe in Greece.

10. Number of Scrabble points for a B, C, M or P : THREE
The game of Scrabble has been around since 1938, the invention of an architect named Alfred Mosher Butts. Butts determined how many tiles of each letter, and the point value of each tile, by analyzing letter distributions in publication like the New York Times.

19. “Save Me” singer Mann : AIMEE
Aimee Mann is an American rock singer and guitarist.

24. Cigarette substance : TAR
The partially combusted particulate matter, produced as a cigarette burns, forms a resinous material called “tar”. Cigarette tar is different than the tar used on roads, but is very toxic. Marijuana smoke produces a very similar tar to cigarette smoke, and is just as dangerous.

27. 1945 Alamogordo event, informally : A-TEST
The first detonation of a nuclear weapon was code named “Trinity”, and was conducted on July 16, 1945 as part of the Manhattan Project. The detonation took place at the Alamogordo Bombing and Gunnery Range located about 25 miles southeast of Socorro, New Mexico.

29. Captain Hook henchman : SMEE
In J. M. Barrie’s play and novel about Peter Pan, Smee is one of Captain Hook’s pirates and is Hook’s right-hand man. Smee is described by Barrie as being “Irish” and “a man who stabbed without offence”. Nice guy! Captain Hook and Smee sail on the pirate ship called the Jolly Roger.

32. ___ Carta : MAGNA
The Magna Carta is a landmark document issued in England in 1215. It represents the first time that an English king had to submit to the will of his subjects, a group of barons who sought to limit the powers of the monarchy. In particular the Magna Carta calls out that no freeman could be punished except through the law of the land. And of course, the Magna Carta was an inspiration for the United States Constitution.

34. Orioles Hall-of-Fame pitcher who modeled Jockey underwear : JIM PALMER
Jim Palmer is a retired professional baseball pitcher who played his whole 19-year career with the Baltimore Orioles. Off the field, Palmer is a noted spokesperson for several products, most notably for Jockey underwear. He also appeared in commercials for the Money Store and a number of vitamin and health-related products.

37. Excursions to la-la land : FANTASIES
La-la land is a euphemism for a state of unconsciousness.

39. School in Troy, N.Y. : RPI
The Rensselaer Polytechnic Institute (RPI) is a private school in Troy, New York. The university is named after its founder Stephen Van Rensselaer who set up the school in 1824. The goal of RPI has always been the “application of science to the common purposes of life”, an objective set by the founder. Given that, the name for the school’s sports teams is quite apt: the Engineers.

42. “The Mary Tyler Moore Show” spinoff : RHODA
The seventies sitcom “Rhoda” was a spinoff of “The Mary Tyler Moore Show” that starred Valerie Harper. The eighth episode of the show was an hour-long special in which Rhoda married her fiance Joe (played by David Groh). At the time of airing it was the second-most watched television episode in history, second only to the 1953 birth of Little Ricky on “I Love Lucy”.

43. Bach’s “Mass ___ Minor” : IN B
Perhaps the most famous mass in classical music is J. S. Bach’s “Mass in B minor”, fittingly completed just before he died. It was one of the last of Bach’s compositions, although much of the music was composed earlier in his life.

50. “I give up!” : UNCLE!
To “say uncle” is an American expression meaning to submit or yield. Its usage dates back to the early 1900s, but nobody seems to know how “uncle!” came to mean “stop!”

55. Jacob’s twin : ESAU
Esau, was the grandson of Abraham and the twin brother of Jacob, the founder of the Israelites. When Esau was born to Isaac and Rebekah, the event was described, “Now the first came forth, red all over like a hairy garment”. Esau is portrayed later in life as being very different from his brother, as a hunter and someone who loves the outdoor life.

59. Archery wood : YEW
Yew is the wood of choice for the longbow, a valued weapon in the history of England. The longbow is constructed with a core of yew heartwood (as the heartwood resists compression) that has a sheath of yew sapwood (as the sapwood resists stretching). The yew was in such demand for longbows that for centuries yew trees were in short supply in Britain and the wood had to be imported from all over Europe.