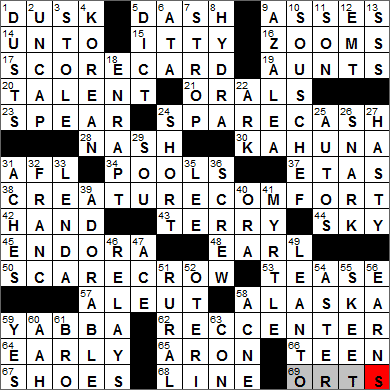 CROSSWORD SETTER: C. W. Stewart
THEME: Rec Center … each of today’s themed answers has two components, with the letters REC spanning the end of the first and beginning of the second component. The REC also sits nicely at the CENTER of each answer:

17A. Item accompanying a pencil in miniature golf : SCORECARD
24A. Money available for nonessentials : SPARE CASH
38A. Food, warmth or a cozy bed : CREATURE COMFORT
50A. Stuffed figure in a cornfield : SCARECROW

Today’s Wiki-est, Amazonian Googlies
Across
14. “Do ___ others as …” : UNTO
The Golden Rule is also known as the ethic of reciprocity, and is a basis for the concept of human rights. A version of the rule used in the Christian tradition is attributed to Jesus: “Do unto others as you would have them do unto you”.

19. Em and Jemima : AUNTS
In “The Wonderful Wizard of Oz”, Dorothy lives with her Aunt Em and Uncle Henry.

The Aunt Jemima brand name was taken from an old vaudeville song called “Old Aunt Jemima”. The whole Aunt Jemima image has been surrounded by controversy for many years, understandably.

28. Poet Ogden : NASH
The poet Ogden Nash is well known for his light and humorous verse. Try this one for size:

30. Hawaiian medicine man : KAHUNA
Like many words in Hawaiian, the term “kahuna” has several English translations, everything from a priest to an expert in some profession. The expression “the Big Kahuna” comes from the movie “Gidget”, released in 1959. The Big Kahuna was the leader of one of the surfing gangs in the film, and was played by Cliff Robertson.

31. C.I.O.’s partner : AFL
The American Federation of Labor (AFL) was founded in 1886, making it one of the first federations of unions in the country. Over time the AFL became dominated by craft unions, unions representing skilled workers of particular disciplines. In the early thirties, John L. Lewis led a movement within the AFL to organize workers by industry, believing this would be more effective for the members. But the craft unions refused to budge, so Lewis set up a rival federation of unions in 1932 called the Congress of Industrial Organizations (CIO). The two federations became bitter rivals for over two decades until finally merging in 1955 to form the AFL-CIO.

37. When flights are due in, for short : ETAS
Expected time of arrival (ETA)

43. Hotel robe material : TERRY
Terry cloth is a fabric designed to absorb lots of liquid. The fabric has relatively large loops of thread that improve the absorption properties. The larger the loop, the more thread, the better the absorption.

48. ___ of Sandwich : EARL
Meats placed between slices of bread was first called a sandwich in the 18th century, named after the Fourth Earl of Sandwich. The Earl was fond of eating “sandwiches” while playing cards at his club.

59. Beginning of a Flintstones cry : YABBA
“Yabba dabba doo!” is one of Fred Flintstone’s catchphrases.

65. Elvis’s middle name : ARON
Elvis Aron Presley was the younger of two identical twins. His brother was stillborn, delivered 35 minutes before Elvis. The brother was named Jesse Garon Presley. So though born a twin, Elvis was raised as an only child.

68. It’s often long at Disneyland : LINE
Walt Disney came up with the idea of building Disneyland after visiting other theme parks with his daughters in the thirties and forties. He started building the park at Anaheim, California in 1954, and the facility opened just one year and one day later. The total cost of construction was $17 million. Opening day did not go smoothly, largely because over 28,000 people visited the park compared to the 11,000 people expected at the invitation-only event. The opening day went so badly that for years Disney executives referred to it as “Black Sunday”.

Down
4. Like Hyundais or Kias : KOREAN
The Hyundai factory in Ulsan, South Korea is the largest integrated automobile manufacturing facility in the world, able to produce 1.6 million vehicles each year.

Kia Motors is the second largest manufacturer of cars in South Korea, behind Hyundai (and Hyundai is a part owner in Kia now). In recent years, Kia has focused on sales into Europe, and has been remarkably successful.

7. Barber’s sharpener : STROP
A strop is a strip of leather used to sharpen/whet a razor.

8. Nine-headed serpent of myth : HYDRA
In Greek mythology, the Lernaean Hydra was a sea snake that had multiple heads. Heracles had to slay the Hydra of Lerna as the second of his Twelve Labors.

9. Red or pink bloom : AZALEA
Azaleas are very toxic to horses, sheep and goats, but strangely enough cause no problem for cats or dogs. And if you go to Korea you might come across “Tug Yonju”, which is azalea wine made from the plant’s blossoms.

18. Mesmerized : ENRAPT
Franz Mesmer was a German physician, the person who coined the phrase “animal magnetism”. Back then the term described a purported magnetic field that resided in the bodies of animate beings. Mesmer also lent his name to our term “mesmerize”.

22. Noah’s construction : ARK
The term “ark”, when used with reference to Noah, is a translation of the Hebrew word “tebah”. The word “tebah” is also used in the Bible for the basket in which Moses was placed by his mother when she floated him down the Nile. It seems that the word “tebah” doesn’t mean “boat” and nor does it mean “basket”. Rather, a more appropriate translation is “life-preserver” or “life-saver”. So, Noah’s ark was Noah’s life-preserver during the flood.

26. Cattiness : SNARK
“Snark” is a term that was coined by Lewis Carroll in his fabulous 1876 nonsense poem “The Hunting of the Snark”. Somehow, the term “snarky” came to mean “irritable, short-tempered” in the early 1900s.

35. “To Kill a Mockingbird” author Harper : LEE
Harper Lee’s Pulitzer Prize-winning novel “To Kill A Mockingbird” was first published in 1960. The book is a mainstay in English classes all around the world and is a great ambassador for American literature, I’d say.

36. Item in the hardware department with a “+” or “-” on its head : SCREW
Screws come with slot-heads (-) and Phillips-heads (+). The Phillips-head screw and screwdriver are named for Henry F. Phillips of Portland, Oregon. Phillips didn’t invent the “+” screw head, but as a businessman he was behind its successful implementation.

40. ___ pro nobis : ORA
“Ora pro nobis” translates from Latin as “pray for us”. It is a common term used in the Roman Catholic tradition and is often shortened to “OPN”.

41. ___ Beach, S.C. : MYRTLE
Myrtle Beach is a coastal city in South Carolina. With a population of only 27,000 people, Myrtle Beach copes with about 14 million tourists annually.

47. Fortunate card to have with a queen or king in blackjack : ACE
The game of “twenty-one” was first referred to in a book by Cervantes, the author famous for writing “Don Quixote”. He called the game “veintiuna” (Spanish for “twenty-one”). Cervantes wrote his story just after the year 1600, so the game has been around at least since then. Twenty-one came to the US but it wasn’t all that popular so bonus payments were introduced to create more interest. One of the more attractive bonuses was a ten-to-one payout to a player who was dealt an ace of spades and a black jack. This bonus led to the game adopting the moniker “Blackjack”.

52. Cheri formerly of “S.N.L.” : OTERI
Cheri Oteri was the SNL cast member who regularly appeared with Will Farrell in the skit featuring a pair of Spartan cheerleaders.

58. Proactiv target : ACNE
Proactiv is an over-the-counter medication that is applied as a treatment for acne. Proactiv’s active ingredient is benzoyl peroxide.