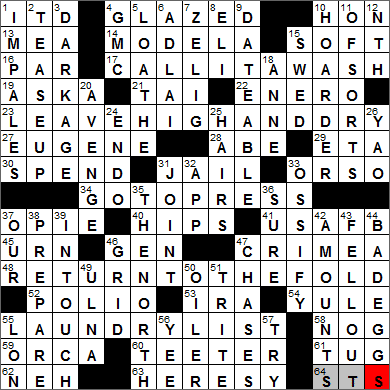 17A. Say that neither side benefited : CALL IT A WASH
23A. Strand : LEAVE HIGH AND DRY
34A. Start being printed : GO TO PRESS
48A. Join a community again : RETURN TO THE FOLD

Today’s Wiki-est, Amazonian Googlies
Across
13. ___ culpa : MEA
Roman Catholics are very familiar with the Latin phrase “mea culpa” meaning “my fault”, as it is used in the Latin Mass. The additional term “mea maxima culpa” translates as “my most grievous fault”.

14. Ford featured on “The Waltons” : MODEL A
The Ford Model A was the original car produced by the Ford Motor Company. The first production run lasted from 1903 to 1904, when it was replaced by the Model C. The name “Model A” was brought back in 1927 and used for the successor to the Model T.

15. Piano, on a music score : SOFT
The term “piano” on a musical score is direction to play “softly”.

21. Mai ___ : TAI
The Mai Tai cocktail is strongly associated with the Polynesian islands, but the drink was supposedly invented in 1944 in Trader Vic’s restaurant in Oakland, California. One recipe is 6 parts white rum, 3 parts orange curaçao, 3 parts Orgeat syrup, 1 part rock candy syrup, 2 parts fresh lime juice, all mixed with ice and then a float added of 6 parts dark rum.

27. Playwright O’Neill : EUGENE
The playwright Eugene O’Neill was born in a New York City hotel room in what is now called Times Square, in 1888. That building no longer exists and there is a Starbucks on the site today, but you can go take a look at the commemorative plaque at the Northeast corner of 43rd and Broadway. O’Neill died in 1953, in room 401 of the Sheraton Hotel on Bay State Road in Boston. His last words were, “I knew it. I knew it. Born in a hotel room, and God damn it, died in a hotel room.”

31. Monopoly square between Connecticut Avenue and St. Charles Place : JAIL
The street names in the US version of Monopoly are locations in or around Atlantic City, New Jersey.

37. Early Ron Howard role : OPIE
Opie Taylor is the character played by Ron Howard on “The Andy Griffith Show”. Opie lives with widowed father Andy Taylor (played by Andy Griffith) and his great-aunt Beatrice “Aunt Bee” Taylor (played by Frances Bavier. Ron Howard first played the role in 1960 in the pilot show, when he was just 5 years old. Howard sure has come a long way since playing Opie Taylor. He has directed some fabulous movies including favorites of mine like “Apollo 13”, “A Beautiful Mind” and “The Da Vinci Code”. And today, “Opie” is a grandfather …

40. Hula dancers shake them : HIPS
Hula is the name of the Polynesian dance. The chant or song that the dance illustrates, that’s known as the mele.

41. Edwards or Andrews: Abbr. : US AFB
Edwards Air Force Base is in a desert area in Southern California. Edwards is a flight test center for the Air Force, and it was here that Chuck Yeager famously broke the sound barrier for the first time. And of course, Edwards was used for many landings of the Space Shuttle.

46. ___-X : GEN
The term Generation X originated in the UK where it was the name of a book by Jane Deverson. Her book detailed the results of a study of British youths in 1964, contrasting their lifestyle to those of previous generations. It was Canadian author Douglas Coupland who was responsible for popularizing the term, with his more successful publication “Generation X: Tales for an Accelerated Culture”. By the latest accepted definition, Gen-Xers were born between 1961 and 1981.

47. Autonomous part of Ukraine : CRIMEA
Considering that the Crimea was the site of the Charge of the Light Brigade as well as the Yalta conference towards the end of World War II, I am ashamed to say that until fairly recently I could not pinpoint the Crimea on a map. I’m even more ashamed to say that I didn’t realize it is an extremely distinctively shaped peninsula, lying south of the Ukraine and jutting into the Black Sea.

48. Join a community again : RETURN TO THE FOLD
“Fold” is another name for a flock of sheep.

52. F.D.R.’s affliction : POLIO
Future president Franklin D. Roosevelt developed polio in 1921, when he was in his late thirties. He picked up the viral disease while on vacation in Campobello Island in Canada.

In the fifties, especially after the 1952 polio epidemic, the biggest health fear in the US was polio because it killed thousands, left even more with disabilities and most of the victims were children. The situation was dire and the authorities immediately quarantined the family of any polio victim, and that quarantine was so strict that in many cases the families were not even permitted to attend the funeral of a family member who died from the disease.

54. Season to drink 58-Across : YULE
“Yule” celebrations coincide with Christmas, and the words “Christmas” and “Yule” have become synonymous in much of the world. However, Yule was originally a pagan festival celebrated by Germanic peoples. The name “Yule” comes from the Old Norse word “jol” that was used to describe the festival.

58. See 54-Across : NOG
It’s not really clear where the term “nog” comes from although it might derive from the word “noggin”, which was originally a small wooden cup that was long associated with alcoholic drinks.

59. Shamu, for one : ORCA
Shamu was the name of the third orca, or killer whale, ever to be featured in a public exhibition. Shamu starred in a popular SeaWorld show in San Diego in the sixties. After she died in 1971, her name lived on as the name “Shamu” is still used by SeaWorld for its killer whale shows. That original Shamu was retired after she grabbed and refused to let go of the leg of one of her trainers.

62. Book after Ezra: Abbr. : NEH
In the Hebrew Bible, the Book of Ezra was originally combined with the Book of Nehemiah, with the two being separated in the early days of the Christian Era.

Down
2. Comb into a beehive, e.g. : TEASE UP
That distinctive “beehive” hairstyle is also called a B-52, because the round beehive-shape also resembles the bulbous nose of a B-52 bomber! The style originated in 1958 and is credited to Margaret Vinci Heldt, the owner of a hair salon in downtown Chicago. I’m not a fan of the beehive, but I do have to say that Audrey Hepburn carried it off in “Breakfast at Tiffany’s”, as did Dusty Springfield in her heyday.

3. Hardly a period of enlightenment : DARK AGE
The “Dark Ages” was a term that used to be popular as a description of the period following the decline of the Roman Empire in Europe, the time after the “light of Rome” was extinguished. The Dark Ages were said to end with the rise of the Italian Renaissance in the 14th century. The Italian Renaissance was centered on the cities of Florence and Siena in Tuscany.

6. Two-time loser to Dwight : ADLAI
Adlai Stevenson (AES) ran for president unsuccessfully against Dwight D. Eisenhower in 1952 and in 1956. Some years after his second defeat, Stevenson served under President Kennedy as Ambassador to the United Nations. Stevenson was always noted for his eloquence and he had a famous exchange in a UN Security Council meeting during the Cuban missile crisis. Stevenson bluntly demanded that the Soviet representative on the council tell the world if the USSR was installing nuclear weapons in Cuba. His words were “Don’t wait for the translation, answer ‘yes’ or ‘no’!” followed by “I am prepared to wait for my answer until Hell freezes over!”

7. 1983 Woody Allen mockumentary : ZELIG
“Zelig” is a 1983 film by Woody Allen. “Zelig” tells the fictitious story, in documentary style, of Leonard Zelig (played by Allen) who has the gift of being able to change his appearance in order to better fit in with the company he keeps. He becomes famous as a “human chameleon”. By using archive footage, the film includes clever “cameos” by real figures from history (like Calvin Coolidge, Herbert Hoover and Susan Sontag).

8. Inventor Whitney : ELI
The inventor Eli Whitney is a best known for inventing the cotton gin. Whitney also came up with the important concept of “interchangeable parts”. Parts that are interchangeable can be swapped out of equipment or perhaps used in related designs.

10. More than a pack rat : HOARDER
A pack rat is rodent that can also be called a woodrat. The pack rat is so called because it frequently drags back objects to its nest. We’ve been using the term “pack rat” for a hoarder since the mid 1800s, so it’s not certain if the rodent was named for the human, or the human for the rodent.

18. Hathaway of “Les Misérables” : ANNE
The young actress Anne Hathaway is a favorite of mine, I must say. She starred in “The Devil Wears Prada” in 2006 and in 2007’s “Becoming Jane”, a film I particularly enjoyed.

The 2012 movie adaption of the musical “Les Misérables” has an ensemble cast, although the two actors getting the most acclaim seem to be Hugh Jackman (as Jean Valjean) and Anne Hathaway (as Fantine). There’s a lot of buzz about the way the soundtrack was recorded. In the past few decades it is common for actors to lip-sync musical numbers to voices that are pre-recorded. In “Les Misérables” the actors instead sang while on set with a piano accompaniment playing in their ears. The orchestral accompaniment was added in post-production.

20. Take an eye for an eye for : AVENGE
The saying “an eye for eye, and a tooth for tooth” originally comes from the code laid down by Hammurabi, King of Babylon (1792-1750 BC). It is also quoted in the Bible in the Gospel of Matthew.

26. Ming of the N.B.A. : YAO
Yao Ming is a retired professional basketball player from Shanghai who played for the Houston Rockets. At 7’6″, Yao was the tallest man playing in the NBA.

35. Civil War winning side : THE NORTH
The American Civil War resulted in about 625,000 deaths, which was equivalent to about 2% of the population at that time, and an average of 420 deaths per day. It was the most devastating conflict in US history, in terms of casualties. For comparison, WWII resulted in 207 deaths per day.

49. Radius neighbor : ULNA
The humerus is the long bone in the upper arm. The bones in the forearm are the radius and ulna. “Ulna” is the Latin word for “elbow”, and “radius” is Latin for “ray”.

55. Chaney of the silents : LON
Lon Chaney, Sr. played a lot of crazed-looking characters in the days of silent movies. He did much of his own make-up work, developing the grotesque appearances that became his trademark, and earning himself the nickname “the man of a thousand faces”. Most famous were his portrayals of the title characters in the films “The Hunchback of Notre Dame” (1923) and “The Phantom of the Opera” (1925).