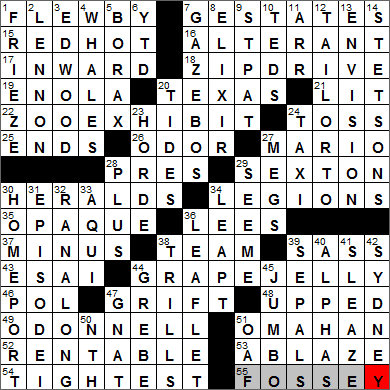 Today’s Wiki-est, Amazonian Googlies
Across
18. Obsolescent storage device : ZIP DRIVE
A Zip drive is a disk storage system that manufactured by Iomega starting in 1994. In its day, zip drives and zip discs provided a relatively large amount of portable computer storage at a very reasonable price.

29. Churchyard gravedigger : SEXTON
A sexton is an officer in a church who looks after the building and perhaps an attached graveyard. The term “sexton” comes from the Medieval Latin word “sacristanus” which means “custodian of sacred objects”.

34. Truckloads : LEGIONS
The word “legion” can be used to mean “a large number”.

36. Remains after the aging process : LEES
The dregs in wine, the sediment that settles during fermentation (and sometimes in the bottle), is also called “lees”.

38. Santa’s reindeer, e.g. : TEAM
We get the names for Santa’s reindeer from the famous 1823 poem called “A Visit from St. Nicholas”, although we’ve modified a couple of the names over the years. The full list is:

43. Lou’s “La Bamba” co-star : ESAI
Esai Morales is best known for his role in the 1987 movie “La Bamba”. The film depicted the life of Ritchie Valens (played by Lou Diamond Phillips) and his half-brother Bob Morales (played by Morales).

44. Concord concoction : GRAPE JELLY
Concord grapes are mostly used to make grape jelly, and are only occasionally used as table grapes or for making wine. The Concord cultivar was developed in the mid 1800s by Ephraim Wales Bull in Concord, Massachusetts, hence the name.

47. Swindler’s moola : GRIFT
“Grift” is money made dishonestly, especially as the result of a swindle. The term perhaps is an alteration of the the word “graft”, which can have a similar meaning.

49. She had a single-season stint on “The View” : O’DONNELL
We don’t get to see Rosie O’Donnell on the screen very much these days. She had a very successful chat show that ran from 1996 to 2002. My favorite performance of hers on the big screen is in a supporting role to Meg Ryan in the 1993 movie “Sleepless in Seattle”.

52. Like Enterprise vehicles : RENTABLE
Enterprise Rent-A-Car was established in 1957 by Jack. C. Taylor in St. Louis, Missouri, where the company is still headquartered today. The company was originally called Executive Leasing Company. The name was changed in 1962 in honor of the aircraft carrier USS Enterprise on which Taylor served during WWII.

55. One of Leakey’s “Trimates” : FOSSEY
The so-called “Trimates” were three female anthropologists famous for studying primates in the wild, namely Jane Goodall, Dian Fossey and Birutė Galdikas. All three researchers were sent out into the field by British paleoanthropologist Louis Leakey, so the Trimates were sometimes referred to as “Leakey’s Angels”.

Down
1. Decorated band along a wall : FRIEZE
A frieze is an architectural feature found in many Roman and Greek buildings. Inside a room, frieze is the name given to the upper part of the wall, between the picture rail and the crown molding. Outside of a room, the term frieze is the name given to any extended decoration that is positioned above eye level. Perhaps the most famous frieze comes from the Parthenon in Athens. Over a third of this highly decorated feature was removed from Athens and taken to London in the early 1800s by the Earl of Elgin, where they remain on display in the British Museum. These famous “Elgin Marbles” are subject of much controversy as the legality of the removal is in dispute.

2. “Reality leaves a lot to the imagination” speaker : LENNON
After the break-up of the Beatles, John Lennon moved to New York with his wife Yoko Ono to the US and settled in New York City. Lennon became active in the anti-Vietnam War movement and fell foul of the Nixon administration. Spurred on by the administration, the INS spent three and a half years trying to deport Lennon based on a 1968 misdemeanor conviction for the possession of cannabis. Ono was granted permanent residence status in 1973, but it wasn’t until 1975 that Lennon received his Green Card.

3. He directed Bela Lugosi in “Bride of the Monster” : ED WOOD
Ed Wood was a screenwriter, director, producer and actor who made a lot of low-budget films during the 1950s. Wood worked a lot with the actor Bela Lugosi and when Lugosi passed away, the popularity of Wood’s films died off with his star. Tim Burton made a biopic about the life and career of Ed Wood that was released in 1994, a movie that was simply called “Ed Wood”.

Bela Lugosi was a Hungarian stage and screen actor, best known for playing the title role in the 1931 film “Dracula” and for playing the same role on Broadway. Lugosi found himself typecast for the rest of his career and almost always played the role of the villain, often in horror movies. When he passed away in 1956, his wife had him buried in the costume he wore playing Count Dracula on Broadway.

4. High rollers, in casino lingo : WHALES
The “casino” originated in the 1700s, first describing a public room for music or dancing. The name “casino” is a diminutive of “casa” meaning “house”.

5. Cheap, shoddy merchandise : BORAX
It was once customary for sellers of cheap furniture to give away borax soap as incentive to buy, which perhaps led to the use of “borax” to mean cheap merchandise or tasteless furnishings.

7. Outdoor wedding settings : GAZEBOS
A gazebo is a roofed structure, often octagonal in shape, that is found mainly in public spaces. Gazebos can be quite small, or can be large enough to perhaps serve as a bandstand. The actual etymology of the term “gazebo” seems to be a bit of a mystery, and there are some misconceptions out there.

8. Alchemist’s offering : ELIXIR
An elixir is a solution of alcohol and water that is used to deliver a medicine. The term “elixir” can also be used to mean a medicine that has the power to cure all ills.

9. Green party V.I.P.? : ST PAT
There is a fair amount known about St. Patrick, some of which comes from two letters written in his own hand. St. Patrick lived in the fifth century, but was not born in Ireland. He was first brought to Ireland at about 16 years of age from his native Britain, by Irish raiders who made him a slave for six years. Patrick managed to escape and returned to his homeland where he studied and entered the Church. He went back to Ireland as a bishop and a missionary and there lived out the rest of his life. There seems to be good evidence that he died on March 17th (now celebrated annually as St. Patrick’s Day), although the year is less clear. The stories about shamrock and snakes, I am afraid they are the stuff of legend.

10. Three Stooges creator Healy and others : TEDS
Ted Healy had a successful stage and film career of his own, but now is best remembered as the creator of the Three Stooges. Healy hired Moe Howard as a “stooge” for his vaudeville act in 1922, and then his brother Shemp Howard as a heckler in 1923. He pulled in Larry Fine in 1925. The trio of Moe, Shemp and Larry parted ways with Healy in 1931 over a contract dispute, and the three eventually evolved into the Three Stooges.

14. Troopers’ toppers : STETSONS
Stetson is a brand name of hat, manufactured by the John B. Stetson Company of St. Joseph, Missouri. The so called “cowboy hat” that Stetson pioneered was such a success that the company became the largest hat maker in the world, producing over 3.3 million hats per year.

20. Almanac info : TIDES
A nautical almanac is a book used by navigators, usually at sea. The main content has traditionally been tables of star position designed to help determine one’s geographical position. Some almanacs also include tide tables.

23. Large pack : HORDE
A “horde” is a large crowd. “Horde” ultimately derives from the Turkish “ordu” that means “camp, army”.

27. What an 18-Across’s capacity is measured in, briefly : MEGS
In the world of computing, one kilobyte (1k) is one thousandth of a megabyte (“1 meg”).

29. Message sometimes written below “F” : SEE ME
A teacher might write the message “see me” on a paper that has been graded with an F.

34. Did an entrechat : LEAPT
In the world of ballet, to perform an “entrechat” a dancer jumps into the air and rapidly crosses the legs before and behind.

38. Voice lesson subjects : TRILLS
In music a “trill” is the rapid alternation of two tones that are very close to each other to make a vibrato sound.

39. Protection for flowers in bud : SEPALS
In a flower, the sepals are those green, leaf-like structures that are “interleaved” with the petals, providing support. Prior to acting as support for the petals, the sepals protect the flower in bud.

42. Biggest city on the smallest continent : SYDNEY
Sydney is the most populous city in Australia, and the capital of the state of New South Wales. Captain James Cook landed at Botany Bay (which is now in Sydney) in 1770, starting the European habitation of Australia. The British then set up a penal colony on Botany Bay. That colony was named “Sydney” after the British Home Secretary at the time, Thomas Townshend, Lord Sydney.

44. Diving bird : GREBE
A grebe is a small to medium-sized freshwater diving bird. Although they appear to be very different, recent molecular studies have shown that grebes and flamingos are closely related.

45. Mammoth : JUMBO
James Anthony Bailey collaborated with P. T. Barnum to establish Barnum and Bailey’s Circus. It was Bailey who negotiated the deal to buy a famous elephant from London Zoo in 1882, the one called “Jumbo”. It was the exposure that Jumbo got in the circus that brought into common usage our term “jumbo” meaning “huge”.

47. Cookout irritant : GNAT
Gnats are attracted to the smell of rotting food, and to vinegar. Simple homemade traps that use vinegar are often constructed to attract and kill gnats.