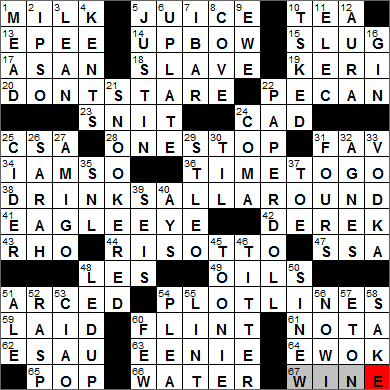 CROSSWORD SETTER: Jeff Chen
THEME: Drinks All Around … ALL of the answers AROUND the edge of today’s grid are DRINKS:

Today’s Wiki-est, Amazonian Googlies
Across
13. Blunted blade : EPEE
The épée that is used in today’s sport fencing is derived from the old French dueling sword. In fact, the the sport of épée fencing is very similar to the dualing of the 19th century. The word “épée” translates from French as “sword”.

14. What a “V” signals to a violinist : UP-BOW
On a musical score, a string player performs and up-bow when there is a “V” above a note. A down-bow is signalled by an inverted U-shape.

19. Body lotion brand : KERI
Keri lotion was introduced by Bristol-Myers Squibb in 1960. Keri Lotion is now made by NOVARTIS Pharmaceuticals.

23. Agitated state : SNIT
The exact etymology of “snit”, meaning “fit of temper”, isn’t really known. The term was first used in print in the play “Kiss the Boys Goodbye” by Clare Booth Luce, which dates back to the 1930s and is set in the American South.

24. Ungentlemanly sort : CAD
Our word “cad”, meaning “a person lacking in finer feelings”, is a shortening of the word “cadet”. “Cad” was first used for a servant, and then students at British universities used “cad” as a term for a boy from the local town. “Cad” took on its current meaning in the 1830s.

25. R. E. Lee’s org. : CSA
The Confederate States of America (CSA) set up government in 1861 just before Abraham Lincoln took office. Jefferson Davis was selected as President of the CSA at its formation and retained the post for the life of the government.

Robert E. Lee is of course renowned as a southern officer in the Civil War. Lee was a somewhat reluctant participant in the war in that he opposed the secession of his home state of Virginia from the Union. At the beginning of the war, President Lincoln invited Lee to take command of the whole Union Army but he declined, choosing instead to stay loyal to his home state.

“10” is a fun romantic comedy released in 1979 starring Dudley Moore, Bo Derek and Julie Andrews. Famously, the movie made stars of Moore and Derek, as well as popularizing Ravel’s marvelous piece of music called “Boléro”.

43. Density symbol : RHO
Rho is the Greek letter that looks just like our Roman letter “p”.

44. Alternative to pasta : RISOTTO
Risotto is an Italian rice dish that is usually served as a first course in Italy, but as a main course here in North America.

48. “___ Misérables” : LES
The 1980 musical “Les Misérables” is an adaptation of the 1862 novel of the same name by Victor Hugo. The show opened in London in 1985, and is the longest running musical in the history of London’s West End. My wife and I saw “Les Miz” in the Queen’s Theatre in London quite a few years ago, but were only able to get tickets in the very back row. The old theater’s seating is very steep, so the back row of the balcony is extremely high over the stage. One of the big events in the storyline is the building of a street barricade over which the rebels fight. At the height we were seated we could see the stagehands behind the barricade, sitting drinking Coke, even smoking cigarettes. On cue, the stagehands would get up and catch a dropped rifle, or an actor that had been shot. It was pretty comical. I didn’t really enjoy the show that much, to be honest. Some great songs, but the musical version of the storyline just didn’t seem to hang together for me.

60. Fire-starting aid : FLINT
Flint is a form of the mineral quartz. Flint can be used to start a fire. The hard edge of flint when struck against steel can shave off a particle of the metal. The particle of steel contains exposes iron that reacts with oxygen in the air creating a spark that can light dry tinder.

62. One of Isaac’s twins : ESAU
Esau, was the grandson of Abraham and the twin brother of Jacob, the founder of the Israelites. When Esau was born to Isaac and Rebekah, the event was described, “Now the first came forth, red all over like a hairy garment”. Esau is portrayed later in life as being very different from his brother, as a hunter and someone who loves the outdoor life.

63. Start of an elimination rhyme : EENIE

64. Endor denizen : EWOK
The Ewoks are creatures who live on the moon of Endor, first appearing in “Star Wars Episode VI: Return of the Jedi”. They’re the cute and cuddly little guys that look like teddy bears.

67. Genteel dinner quaff : WINE
“Quaff” is both a verb and a noun. One quaffs (takes a hearty drink) of a quaff (a hearty drink).

Down
1. Product of fermenting honey : MEAD
Mead is a lovely drink, made from fermented honey and water.

11. G.E. component: Abbr. : ELEC
The General Electric Company is usually referred to simply as “GE”. One of the precursor companies to GE was Edison General Electric, founded in 1890 by the inventor Thomas Edison. What we know today as GE was formed two years later when Edison merged his company with Charles Coffin’s Thomson-Houston Electric Company. In 1896, GE was selected as one of the 12 companies listed on the newly formed Dow Jones Industrial Average. GE is the only one of the original 12 that is still on that list. I spent over ten years with GE at the beginning of my working career, and in fact it was GE that asked me to transfer to the US back in the 1980s …

16. Clear libation popular in England : GIN
The spirit known as gin gets its unique flavor mainly from juniper berries. The name “gin” comes into English from the translation of “juniper” from either French (genièvre), Dutch (jenever) or Italian (ginepro).

21. Hornswoggled : SNOOKERED
The use of the word “snooker” to mean “to cheat” has been used since the early 1900s. The term probably took on that connotation as it’s relatively easy to trick someone who is new to the game of snooker.

“To hornswoggle” is to cheat, to deceive, to bamboozle.

26. England’s Fergie, formally : SARAH
Sarah Ferguson married Prince Andrew of the British Royal Family in 1986 and on the occasion of the wedding, Andrew and Sarah were made Duke and Duchess of York. Sarah Ferguson was in the news not that long ago when she was the target of a sting operation by a British tabloid newspaper. She was caught asking for 500,000 British pounds in order to help facilitate access to her ex-husband, Prince Andrew, and actually accepted 40,000 pounds in an envelope. After being exposed, Ferguson made the excuse that she had been drinking prior to soliciting the cash.

29. Fifth-century pope called “the Great” : ST LEO
The first pope named Leo is now known as Pope Saint Leo the Great. Leo I is famous for meeting with the feared Attila the Hun and persuading him to turn back his invading force that was threatening to overrun Western Europe.

31. Trey beaters : FOURS
A trey of clubs, for example, is a name for the three of clubs in a deck of cards. The name “trey” can also be used for a domino with three pips.

32. Moorehead of “Citizen Kane” : AGNES
Agnes Moorehead was an actress best remembered for her role as Endora, Samantha’s mother on the sitcom “Bewitched”. Moorehead died in 1974 from uterine cancer. She was one of over 90 out of 220 cast and crew members of the 1956 movie “The Conqueror” who all died from cancer, including co-stars Susan Hayward and John Wayne. There is wide speculation that the people working on the film were affected by radiation from eleven nuclear explosions that had taken place the prior year at the Yucca Flats Nevada Test Site that was located nearby and upwind.

33. Clear libation popular in Russia : VODKA
The term “vodka” is a Slavic word meaning “little water”. Vodka is traditionally made by distilling fermented grains or potatoes, with the resulting beverage being composed mainly of water and ethanol, with traces of impurities. It has become more and more common to see vodkas with added flavors.

35. Presenter of many a spoof, for short : SNL
“Saturday Night Live” (SNL)

39. Six, in Seville : SEIS
The city of Seville is the capital of Andalusia in southern Spain. Seville is a favored setting for many operas including “The Barber of Seville” by Rossini, “Fidelio” by Beethoven, and Mozart’s “Don Giovanni” and “The Marriage of Figaro”.

45. Nickname for the $2 Canadian coin : TOONIE
“Toonie” is the familiar name for a two-dollar coin in Canada. A kind blog reader pointed out that the one-dollar bill was replaced with the “loonie” coin, a nickname that comes from the “loon” bird that is on one side of the coin. The “toonie” nickname for the two-dollar coin is imitative of the term “loonie”, and I suppose might be spelled “two-nie”. The toonie replaced the two-dollar bill in 1996. The paper bill cost 6 cents to print and lasted about a year in circulation, whereas the toonie costs 16 cents to mint and should last 20 years. Good move …

54. “Nolo contendere,” e.g. : PLEA
“Nolo contendere” is a legal term that translates from Latin as “I do not wish to contend”. It’s the plea of “no contest” and is an alternative to “guilty” or “not guilty”, meaning that one doesn’t admit guilt but nor does one dispute the charge.

55. Dryer fuzz : LINT
“Lint”, meaning “fuzz”, is one of those terms that I had to learn when I moved to the US. We call the same thing “fuzz” on the other side of the Atlantic.

57. School for James Bond : ETON
The world-famous Eton College is just a brisk walk from Windsor Castle, which itself is just outside London. Eton is noted for producing many British leaders including David Cameron who took power in the last UK general election. The list of Old Etonians also includes Princes William and Harry, the Duke of Wellington, George Orwell, and the creator of James Bond, Ian Fleming (as well as 007 himself as described in the Fleming novels).

58. Clear libation popular in Japan : SAKE
We refer to the Japanese alcoholic beverage made from rice as “sake”. We’ve gotten things a bit mixed up in the West. “Sake” is actually the word that the Japanese use for all alcoholic drinks. What we know as sake, we sometimes refer to as “rice wine”. It is indeed made from rice, but it is a brewed rather than fermented and so is more like a beer than a wine.