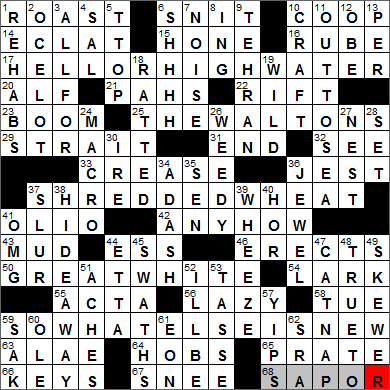 37A. Breakfast cereal … or a hint to what’s found in the answers to the four starred clues? : SHREDDED WHEAT

14. Dazzling success : ECLAT
“Éclat” can mean a brilliant show of success, or the applause or accolade that one receives. The word derives from the French “éclater” meaning “to splinter, burst out”.

16. Con artist’s mark : RUBE
A “rube” is person lacking sophistication, often described as “a country bumpkin”. The term derives from the masculine name “Reuben”, which was considered back in the early 1800s to be a typical name used in rural areas.

20. Sitcom character from Melmac : ALF
“ALF” is a sitcom that aired in the late eighties. ALF is a hand-puppet, supposedly an alien from the planet Melmac that crash-landed in a suburban neighborhood. “ALF” stands for “alien life form”.

21. Oom-___ (tuba sounds) : PAHS
The tuba is the lowest pitched of all the brass instruments, and one of the most recent additions to the modern symphony orchestra (usually there is just one tuba included in an orchestral line-up). “Tuba” is the Latin word for “trumpet, horn”. Oom-pah-pah …

29. ___ of Gibraltar : STRAIT
The Strait of Gibraltar is the very narrow strait connecting the Atlantic Ocean to the Mediterranean Sea. On one side of the strait is Spain (and the tiny British Territory of Gibraltar), and on the other is Morocco. At its narrowest point, the strait is only 9 miles wide, that’s just 9 miles of water separating the continents of Europe and Africa.

33. Lacrosse goalie’s area : CREASE
Even though lacrosse was dropped from the Olympics after the 1908 games, it is currently enjoying a resurgence of popularity outside of North America.

37. Breakfast cereal … or a hint to what’s found in the answers to the four starred clues? : SHREDDED WHEAT
Shredded wheat is one of my favorite breakfast cereals. It was invented way back in 1893 by one Henry Perky. Shredded wheat is made by a number of manufacturers, and “shredded wheat” is a generic term. Kellogg and Nabisco fought it out in court, and the decision was that the term could not be trademarked.

41. Mixed bag : OLIO
Olio is a term meaning a hodgepodge or a mixture, coming from the mixed stew of the same name. The stew in turn takes its name from the Spanish “olla”, the clay pot used for cooking.

50. *Fearsome shark : GREAT WHITE
The great white shark is one big fish, and can grow to over 21 feet long and weigh over 7,000 pounds. They can also live long lives, over 70 years. The great white has no natural predator, and is responsible for far more attacks on humans than any other shark species.

55. Official proceedings : ACTA
Actum (plural “acta”) is the Latin word for “deed”. “Acta” is used in English to describe many official records, including minutes, proceedings etc.

58. Night on which “60 Minutes” originally aired: Abbr. : TUE
The marvelous news magazine program “60 Minutes” has been on the air since 1968. The show is unique among all other regularly-scheduled shows in that it has never used theme music. There is just the ticking of that Aristo stopwatch.

64. Gear-cutting tools : HOBS
“Hobbing’ is the name given to the machining process that produces gears and sprockets.

66. Specifications marked on 10-hole harmonicas : KEYS
The harmonica is a reed instrument. It contains a number of reeds that are usually made from metal, all arranged on a reed plate.

67. Knife of old : SNEE
“Snick or snee” is the name given to cut and thrust while fighting with a knife. The phrase is rooted in a pair of Dutch words and it gave its name to a “snee”, a light sword-like knife.

68. Quality that produces taste : SAPOR
“Sapor” is another word for a flavor, a quality that can be tasted. “Sapor” is the Latin word for “taste, flavor”.

Down
2. Spotted wildcat : OCELOT
The ocelot is found mainly in South and Central America, although there have been sightings as far north as Arkansas. An ocelot doesn’t look too different from a domestic cat, and some have been kept as pets. Perhaps most famously, Salvador Dali had one that he carried around everywhere with him.

4. Mule of song : SAL
The song “Fifteen Miles on the Erie Canal” was written in 1905. The lyrics are nostalgic and look back to the days when traffic on the canal was pulled by mules, bemoaning the introduction of the fast-moving engine-powered barges. The first line is “I’ve got an old mule and her name is Sal”.

5. Muscle car roof option : T-TOP
A T-top is a car roof that has removable panels on either side of a rigid bar that runs down the center of the vehicle above the driver.

8. Multinational bank that sponsored the New York City Marathon : ING
ING is a huge Dutch banking institution created via a merger in 1991. The company headquarters is in a spectacular building in Amsterdam called simply ING House. ING stands for Internationale Nederlanden Groep.

12. Knighthood letters : OBE
The Most Excellent Order of the British Empire is an order of chivalry in the UK that was established in 1917 by King George V. There are five classes within the order, which are in descending seniority:

19. Like some Uno cards : WILD
In my youth I remember being taught a great card game, by a German acquaintance of mine, called Mau Mau. Years later I discovered that Uno is basically the same game, but played with a purpose-printed deck instead of the regular deck of playing cards that’s used for Mau Mau. I hear that Mau Mau is derived from the game called Crazy Eights.

24. Certain econ class : MACRO
Macroeconomics is the study of economies as a whole, rather than individual markets. Microeconomics is focused on the actions of individual entities like companies or individuals, and how these actions impact specific markets.

44. James who was portrayed by Beyoncé : ETTA
Etta James was best known for her beautiful rendition of the song “At Last”. Sadly, as she disclosed in her autobiography, James lived a life that was ravaged by drug addiction leading to numerous legal and health problems. Ms. James passed away in January 2012 having suffered from leukemia.

Beyoncé Knowles established herself in the entertainment industry as the lead singer with the R&B group Destiny’s Child. She launched her solo singing career in 2003, two years after making her first appearance as an actor. In 2006 she played the lead in the very successful movie adaptation of the Broadway musical “Dreamgirls”. Beyoncé is married to rap star Jay-Z.

49. Shish kebab need : SKEWER
The name “kebab” (also “kabob”) covers a wide variety of meat dishes that originated in Persia. In the West, we usually use “kebab” when talking about shish kebab, which is meat (often lamb) served on a skewer. “Shish” comes from the Turkish word for “skewer”.

Café au lait (“coffee with milk”) is usually strong, drip coffee to which one adds steamed milk. At least that’s the way we tend to make in this country.