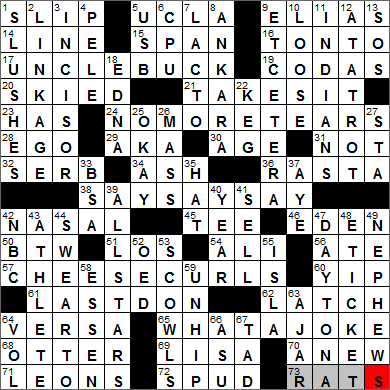 Today’s Wiki-est, Amazonian Googlies
Across
5. Bruins’ sch. : UCLA
The UCLA Bruins mascots are Joe and Josephine Bruin, characters that have evolved over the years. There used to be “mean” Bruin mascots but they weren’t very popular with the fans, so now there are only “happy” Bruin mascots at the games.

9. Sewing machine inventor Howe : ELIAS
Elias Howe was an American inventor. Howe wasn’t the first to come up with the idea of a sewing machine, but he was the first to develop one that was functional.

16. Lone Ranger’s sidekick : TONTO
On the television version of “The Lone Ranger”, Tonto was played by the actor Jay Silverheels.

“The Lone Ranger” was both a radio and television show, dating back to its first radio performance in 1933 on a Detroit station. The line “Hi-yo, Silver! Away!” was a device used in the storyline to signal that a riding sequence was starting, so cue the music!

17. 1989 John Hughes movie starring John Candy : UNCLE BUCK (say “uncle”)
“Uncle Buck” is a 1989 comedy movie co-produced, written and directed by the great John Hughes. John Candy plays the title role. Macaulay Culkin plays a nephew, in a big-screen appearance one year before he starred in “Home Alone”, which was also directed and produced by Hughes.

To “say uncle” is an American expression meaning to submit or yield. Its usage dates back to the early 1900s, but nobody seems to know how “uncle!” came to mean “stop!”

19. Concluding notations : CODAS
In music, a coda is primarily a passage that brings a movement to a conclusion. “Coda” is Italian for “tail”.

30. 35, as a minimum to be U.S. president : AGE
In order to be eligible to hold the office of US president, three requirements have to be met, which are called out in Article II of the US Constitution:

32. Belgrade resident : SERB
Serbs are an ethnic group native to the Balkans in southeastern Europe. Although Serbs exist as a minority group in many countries in the region, they are the majority ethnic group in Serbia, in Montenegro and in Bosnia and Herzegovina.

Belgrade is the capital city of Serbia. The name Belgrade translates into “White City”.

36. Many a dreadlocks wearer, informally : RASTA
I must admit that I don’t really understand Rastafarianism. I do know that a “Rasta”, like Bob Marley, is a follower of the movement. Some say that Rastafarianism is a religion, some not. I also know that it involves the worship of Emperor Haile Selassie I of Ethiopia.

38. Paul McCartney/Michael Jackson hit … or a hint to the starts of 17-, 24-. 57- and 65-Across : SAY SAY SAY
“Say Say Say” is a 1983 song that was written and performed by Paul McCartney and Michael Jackson. McCartney had collaborated a year earlier with Jackson on “The Girl is Mine”, a song destined for Jackson’s “Thriller” album. Jackson returned the favor and recorded “Say Say Say” for McCartney’s “Pipes of Peace” album.

54. Spinks foe : ALI
The boxer Muhammad Ali is recognized on both sides of the Atlantic as one of the greatest sports figures of the 1900s. In 1999, Ali was named “Sportsman of the Century” by “Sports Illustrated” and “Sports Personality of the Century” by the BBC.

57. Snack that leaves the fingers orange : CHEESE CURLS (say “cheese”)
The snack food known as “cheese curls” are sold under various brand names including “Cheetos” and “Cheese Doodles” in North America, and “Wotsits” in the UK.

Photographers often instruct us to say “cheese”, to elicit a smile-like expression. Even Japanese photographers use the word “cheese” for the same effect. Bulgarians use the word “zele” meaning “cabbage”. The Chinese say “eggplant”, the Danish “orange”, the Iranians “apple” and the most Latin Americans say “whiskey”.

The novelist and screenwriter Mario Puzo, was best known for his book “The Godfather”, which he also co-adapted for the big screen. His name is less associated with some very famous screenplays that he wrote, including “Earthquake”, “Superman” and “Superman II”.

64. Vice ___ : VERSA
“Vice versa” is a Latin phrase meaning “with position turned”. We always pronounce this term “incorrectly”. In Latin, a “c” is always a hard sound, and a “v” is pronounced like a “w”. The pronunciation should be something like “wee-kay wehr-sa”.

69. “Mona ___” : LISA
Leonardo da Vinci’s masterpiece that we know in English as the “Mona Lisa” is called “La Gioconda” in Italian, the language of the artist. It’s also known as “La Joconde” by the Government of France which owns the painting and displays it in the Louvre Museum in Paris. The title comes from the name of the subject, almost certainly Lisa Gherardini, wife of Francesco del Giocondo. Giocondo was a wealthy silk merchant in Florence who commissioned the painting for the couple’s new home to celebrate the birth of their second son.

71. Boxer Spinks and others : LEONS
Leon Spinks is former professional boxer from St. Louis, Missouri. Spinks’ greatest bout had to be his 1978 fight with Muhammad Ali that Spinks won by a unanimous decision. The fight was for the world heavyweight title, and marked the only time Muhammad Ali lost a title in the ring. However, Spinks was stirpped of his title when he refused to defend it against Ken Norton. Spinks opted instead to have a rematch with Ali in 1979, and this time it was Ali who won by a unanimous decision.

72. Tater : SPUD
The word “spud” is used as a slang term for a potato and was first recorded in the mid-1800s, in New Zealand would you believe?

Down
4. One-named soccer star : PELE
Pelé is the nickname of Edson de Nascimento, a soccer player who has used the name Pelé for most of his life. Pelé is now retired, and for my money was the world’s greatest ever player of the game. He is the only person to have been part of three World Cup winning squads, and is a national treasure in his native Brazil.

5. ___ port (computer feature) : USB
Universal Serial Bus (USB) is an industry standard dealing with how computers and electronic devices connect and communicate, and deal with electrical power through those connections.

6. Heart of a computer, for short : CPU
The Central Processing Unit (CPU) is the main component on the “motherboard” of a computer. The CPU is the part of the computer that carries out most of the functions required by a program. Nowadays you can get CPUs in everything from cars to telephones.

8. Turkey’s capital : ANKARA
Ankara is the second largest city in Turkey, after Istanbul (formerly Constantinople). After WWI, the Ottoman Empire had been defeated and the Allies occupied the Ottoman capital of Istanbul. The victors planned to break up most of Turkey, leaving native Turks just part of their country for their own. In the inevitable War of Independence that followed, the Turkish Nationalists used Ankara as their base. When the Nationalists emerged victorious, they declared Ankara the new capital of Turkey.

13. Emergency call : SOS
The combination of three dots – three dashes – three dots, is a Morse signal first introduced by the German government as a standard distress call in 1905. The sequence is remembered as the letters SOS (three dots – pause – three dashes – pause – three dots), although in the emergency signal there is no pause between the dots and dashes, so SOS is in effect only a mnemonic. Similarly, the phrases “Save Our Souls” and “Save Our Ship” are also mnemonics, introduced after the “SOS” signal was adopted.

18. Poet ___ St. Vincent Millay : EDNA
Edna St. Vincent Millay was an American poet and playwright, the third woman to receive the Pulitzer Prize for Poetry (in 1923 for “The Ballad of the Harp-Weaver”). Millay was noted not only for her work, but also for the open arrangement that she and her husband had in their marriage. Millay took many lovers, including the poet George Dillon for whom she wrote a number of sonnets.

42. Jimmy Fallon’s network : NBC
Jimmy Fallon was a cast member for a number of years on “Saturday Night Live” before getting his own talk show in 2009, “Late Night with Jimmy Fallon”. Fallon is in the news right now as he is about to take over “The Tonight Show” from Jay Leno.

47. Nascar race locale : DAYTONA
The Daytona 500 is the event with the largest purse on the NASCAR calendar.

49. Huey, Dewey and Louie, to Donald : NEPHEWS
Donald Duck’s nephews are identical triplets called Huey, Dewey and Louie, and they first appeared on the screen in 1938. Once in awhile due to errors in production, a fourth duck can be seen in the background. This little “mistake” is affectionately called “Phooey Duck” by folks in the industry.

52. Ref. with about 22,000 pages : OED
The “Oxford English Dictionary” (OED) contains over 300,000 “main” entries and 59 million words in total. It is said it would take a single person 120 years to type it out in full. The longest entry for one word in the second edition of the OED is the verb “set”. When the third edition was published in 2007, the longest entry for a single word became the verb “put”. Perhaps not surprisingly, the most-quoted author in the OED is William Shakespeare, with his most quoted work being “Hamlet”. The most-quoted female author is George Eliot (aka Mary Ann Evans).

63. Slightly open : AJAR
Our word “ajar” is thought to come from Scottish dialect, in which “a char” means “slightly open”.

66. Sun Devils’ sch. : ASU
Arizona State University (ASU) has a long history, founded as the Tempe Normal School for the Arizona Territory in 1885. The athletic teams of ASU used to be known as the Normals, then the Bulldogs, and since 1946 they’ve been called the Sun Devils.

67. Smidgen : TAD
Back in the 1800s “tad” was used to describe a young child, and this morphed into our usage of “small amount” in the early 1900s. The original use of “tad” for a child is very likely a shortened version of “tadpole”.

Our word “smidgen”, meaning a small amount, might come from the Scots word “smitch” that means the same thing or “a small insignificant person”.