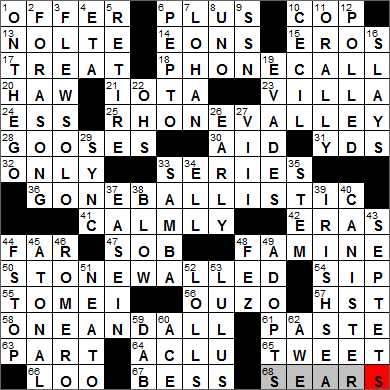 CROSSWORD SETTER: Lynn Lempel
THEME: One and All … today’s themed answers each contain the words ONE and ALL hidden within:

18A. An operator may help place one : PHONE CALL
25A. Wine-producing area of SE France : RHONE VALLEY
36A. Flown into a rage : GONE BALLISTIC
50A. Refused to cooperate : STONEWALLED

Today’s Wiki-est, Amazonian Googlies
Across
10. Police officer : COP
“To cop” was northern British dialect for “to seize, catch”. This verb evolved in the noun “copper”, describing a policeman, someone who catches criminals. “Copper” was shortened to “cop”.

13. Actor Nick : NOLTE
The actor Nick Nolte got his first big break playing opposite Jacqueline Bisset and Robert Shaw in “The Deep”, released in 1976. Prior to that he had worked as a model, and in fact appeared in a magazine advertisement for Clairol in 1972 alongside fellow model, Sigourney Weaver.

15. Arrow-shooting Greek god : EROS
Eros was the Greek god of love, the Greek counterpart of the Roman god Cupid.

21. Letter after theta : IOTA
Iota is the ninth letter in the Greek alphabet. We use the word “iota” to portray something very small as it is the smallest of all Greek letters.

The Greek letter theta is the one that looks like a number zero with a horizontal line in the middle.

23. Luxurious country house : VILLA
The original “villas” were country houses owned by the elite in Ancient Rome. A member of the Roman elite would live in a “domus” in the city, whereas the rest of the population would live in “insulae”, apartment buildings.

28. Pokes in the rear : GOOSES
“To goose” is to prod into action, albeit a little rudely. A “goose” is a prod or a pinch in the rear end.

55. Marisa of “Anger Management” : TOMEI
Marisa Tomei’s first screen role was in “As the World Turns”, but her break came with a recurring role in “The Cosby Show” spinoff, “A Different World”. Tomei won an Oscar for her delightful performance in “My Cousin Vinny” in 1992.

57. President before D.D.E. : HST
The initial “S” in the middle of the name Harry S. Truman doesn’t stand for anything. The future-president was named “Harry” in honor of his mother’s brother Harrison “Harry” Young. The initial “S” was chosen in honor of young Harry’s two grandfathers: Anderson S-hipp Truman and S-olomon Young.

President Eisenhower was born in Denison, Texas and given the name David Dwight Eisenhower, but by the time he made it to the White House he was going by the name Dwight D. Eisenhower. Growing up, his family called him Dwight, and when “Ike” enrolled in West Point he himself reversed the order of his given names.

64. Rights group, for short : ACLU
The American Civil Liberties Union (ACLU) has its roots in the First World War when it was founded to provide legal advice and support to conscientious objectors.

65. Message in 140 or fewer characters : TWEET
I have never tweeted in my life, and have no plans to do so. Twitter is a micro-blogging service that limits any post sent to just 140 characters. In a sense, it is similar to this blog. Here I send out a post once a day containing information that I think might be useful to folks (thank you for reading!). I don’t think I could send out much of interest using just 140 characters.

66. British bathroom : LOO
When I was growing up in Ireland, a “bathroom” was a room that had a bath and no toilet. The separate room with the commode was called “the toilet” or sometimes the W.C. (the water closet). Apparently the term closet was used because in the 1800s when homeowners started installing toilets indoors they often displaced clothes and linens in a “closet”, as a closet was the right size to take the commode. It has been suggested that the British term “loo” comes from Waterloo (water-closet … water-loo), but no one seems to know for sure. Another suggestion is that the term comes from the card game of “lanterloo” in which the pot was called the loo!

67. “Porgy and ___” : BESS
“Porgy and Bess” is an opera with music by George Gershwin, lyrics by Ira Gershwin, and libretto by DuBose Heyward. The storyline of the opera is based on the novel “Porgy” written by DuBose Heyward and and wife Dorothy. “Porgy and Bess” was first performed in 1935, in New York City, but really wasn’t accepted as legitimate opera until 1976 after a landmark production by the Houston Grand Opera. The most famous song from the piece is probably the wonderful aria “Summertime”.

68. ___, Roebuck and Co. : SEARS
Richard Sears was a station agent on the railroad. In the late 1800s, he bought up a shipment of unwanted watches that was left at his depot and sold the watches to other agents up and down the line. He was so successful that he ordered more watches and then came up with the idea of using a catalog to promote more sales. The catalog idea caught on, and by the mid 1900s Sears was the biggest retailer in the whole country.

Down
4. When a plane is due in, for short : ETA
Expected time of arrival (ETA)

6. ___-Bismol : PEPTO
Pepto-Bismol was originally marketed as a remedy for infant diarrhea, and sold under the name “Bismosol: Mixture Cholera Infantum”.

“Freaky Friday” is a well-known children’s novel, written by Mary Rodgers and published in 1972. The basic story is that one Friday, a mother and her teenage daughter have their bodies switched due to the effects of an enchanted fortune cookie. Hilarity ensues! In the 2003 screen adaptation, Jamie Lee Curtis plays the mother Dr. Tess Coleman, and Lindsay Lohan plays the daughter Anna.

9. Nine-digit fig. : SSN
A Social Security number (SSN) is divided into three parts i.e AAA-GG-SSSS, Originally, the Area Number (AAA) was the code for the office that issued the card. Since 1973, the Area Number reflects the ZIP code from which the application was made. The GG in the SSN is the Group Number, and the SSSS in the number is the Serial Number. However, this is all moot, as since 2011 SSN’s are assigned randomly.

10. Filmmaker ___ B. DeMille : CECIL
Cecil B. Demille was a movie director and producer who started his professional career in the silent era. DeMille’s movies were often epic works, such “Cleopatra” (1936), “Samson and Delilah” (1949), “The Greatest Show on Earth” (1952) and “The Ten Commandments” (1956). The Golden Globe Cecil B. DeMille Award is named in his honor, and indeed he was its first recipient.

27. Britain’s last King Henry : VIII
Famously, King Henry VIII had six queens consort. There is a rhyme that is commonly used to help remember the fates of each of his wives, which goes:

King Henry the Eighth, to six wives he was wedded. One died, one survived, two divorced, two beheaded.

The use of the term “divorce” isn’t quite accurate though, as in fact Henry had two of his marriages annulled. His wives (and their fates) were:

33. Rio carnival dance : SAMBA
Samba is a Brazilian dance, very much symbolic of the festival known as Carnival. Like so much culture around the world, the Samba has its roots in Africa, as the dance is derived from dances performed by former slaves who migrated into urban Rio de Janeiro in the late 1800s. The exact roots of the name “samba” seem to have been lost in the mists of time. However, my favorite explanation is that it comes from an African Kikongo word “Semba” which means “a blow struck with the belly button”. We don’t seem to have a need for such a word in English …

39. Isle of Man’s locale : IRISH SEA
The Isle of Man is a large island located in the middle of the Irish Sea between Great Britain and Ireland. I used to spend a lot of time there in my youth, and a very interesting place it is indeed. The Isle of Man is classed as a British Crown Dependency and isn’t part of the United Kingdom at all. It is self-governing and has its own parliament called the Tynwald. The Tynwald was created in AD 979 and is arguably the oldest continuously-running parliament in the world. The inhabitants of the island speak English, although they do have their own language as well called Manx, which is very similar to Irish Gaeilge and Scottish Gaelic. And then there are those Manx cats, the ones without any tails. I’ve seen lots of them, and can attest that they are indeed found all over the island.

43. Groups like Disney’s dwarfs : SEPTETS
In the original Brothers Grimm fairy tale called “Snow White”, the seven dwarfs were not given any names. The names were added for the 1937 classic Disney film “Snow White and the Seven Dwarfs”. The seven dwarfs are:

44. Camera setting : F-STOP
Varying the f-stop in a lens varies how big the lens opening (the aperture) is when a photograph is taken. Smaller apertures (higher f-stop values) admit less light, but result in sharper photographs.

45. Lacking a key, musically : ATONAL
Atonal music is not written in any particular key, and therefore does not have a key signature.

46. Cesar who played the Joker : ROMERO
Cesar Romero was an American actor of Cuban descent from New York. He played a wide variety of roles on the big screen, but is remembered by many for playing the Joker on the “Batman” television show from the sixties.

48. Turkish topper : FEZ
“Fez” is the name given to the red cylindrical hat worn mainly in North Africa, and by Shriners here in the US. The fez used to be a very popular hat across the Ottoman Empire. The etymology of “fez” is unclear, although it might have something to do with the Moroccan city named Fez.

53. Real doozies : LULUS
We call a remarkable thing or a person a “lulu”. The term is used in honor of Lulu Hurst, the Georgia Wonder, who was a stage magician active in the 1880s.

Eleanora Duse was an Italian actress, known professionally simply as “Duse”. There is a theory that our term “doozy” derived from Eleanora’s family name. I guess she was a “doozy”.

60. Snoopy, in his dreams : ACE
A flying ace is an aviator who has shot down a number of enemy planes during combat. The qualifying number of kills seems to vary, but five is common. The first use of “ace” was during WWI when the French newspapers dubbed pilot Adolphe Pegoud “l’as” (French for “the ace”) when he shot down his fifth German plane.

Snoopy, the famous beagle in the “Peanuts” comic strip, has a number of alter-egos and is sometimes depicted as a World War I flying ace piloting a Sopwith Camel biplane. Snoopy’s arch-enemy in the air is Manfred von Richthofen, the Red Baron, and Snoopy can often be seen shaking his fist and crying out, “Curse you, Red Baron!”