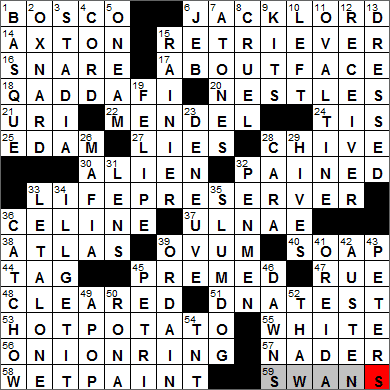 6. TV actor who lived, appropriately, in Hawaii : JACK LORD
Jack Lord was the stage name of actor John Ryan. He was famous for playing Steve McGarrett on television’s “Hawaii Five-O”, and for playing Felix Leiter in the first James Bond movie, “Dr. No”. He was also offered the part of Captain Kirk in the “Star Trek” TV show, a part that of course eventually went to William Shatner.

14. Hoyt who wrote “Joy to the World” : AXTON
Hoyt Axton was a singer-songwriter best known for his folk-style songs. The Axton song most familiar to me is “Joy to the World”, which was a bit hit for Three Dog Night in 1971.

15. Go-getter on the hunt? : RETRIEVER
Retriever is one of the three major types of gun dog, along with flushing spaniels and pointers.

Muammar Gaddafi was the ruler in Libya from 1969 to 2011. Gaddafi came to power in a bloodless coup in 1969 when he led a group of junior military officers in taking over the country from King Idris of Libya while the king was in Turkey receiving medical treatment.

20. Gets ensconced : NESTLES
To ensconce oneself, one settles securely or comfortably somewhere. Back in the late 1500s, “to ensconse” meant “to cover with a fort” as a “sconse” is a small defensive fort or earthwork.

21. Altdorf’s canton : URI
Supposedly William Tell came from Uri, a canton in the German part of Switzerland. Altdorf is the capital of Uri and is the city where William Tell shot the apple off his son’s head, at least according to legend.

22. 19th-century abbot and scientist : MENDEL
Gregor Mendel was an Austrian monk, and a scientist who achieved fame after his passing when his work in the field of genetics was rediscovered. The conclusions he drew from his studies of garden peas led to him earning the moniker “father of modern genetics”.

25. Cheese made from the milk of Friesian cows : EDAM
Edam cheese takes its name from the Dutch town of Edam in North Holland. The cheese is famous for its coating of red paraffin wax, a layer of protection that helps Edam travel well and prevents spoiling. You might occasionally come across an Edam cheese that is coated in black wax. The black color indicates that the underlying cheese has been aged for a minimum of 17 weeks.

The Holstein Friesian breed of cattle originated in the Friesland province of the Netherlands and the German state of Schleswig-Holstein. The breed is very common on dairy farms all over the world, and is the one with the black and white markings.

28. Relative of a leek : CHIVE
Chives are the smallest species of edible onion, and a favorite of mine.

36. First name in pop : CELINE
French-Canadienne singer Céline Dion first came to international attention when she won the 1988 Eurovision Song Contest, representing Switzerland in the competition that was hosted in Dublin, Ireland.

37. Arm bones : ULNAE
The humerus is the long bone in the upper arm. The bones in the forearm are the radius and ulna. “Ulna” is the Latin word for “elbow”, and “radius” is Latin for “ray”.

38. Charles who was born Angelo Siciliano : ATLAS
Charles Atlas’s real name was Angelo Siciliano, an Italian who moved to America in his teens. The story he told, and turned into a great advertising campaign, was that as a 97-pound weakling he once had sand kicked into his face by a bully. He went on a bodybuilding regime, developed his muscles, and then marketed the concept across America. He took the name Charles Atlas after he was told that his new-found body looked like that of a statue of the Greek god Atlas sitting on top of a hotel in Coney Island.

39. Reproductive cell : OVUM
A gamete is a reproductive cell that has half the full complement of genes needed to make a normal cell. In sexual reproduction, it takes two gametes, one from each parent, to fuse into one cell which then develops into a new organism. The female gamete is the ovum, and the male the sperm.

45. Johns Hopkins program : PRE-MED
Johns Hopkins was a businessman and philanthropist from Baltimore who made his fortune from shrewd investments, particularly in the Baltimore and Ohio Railroad (B&O). His relatively unusual given name of “Johns” was a family name that came from his grandmother Margaret Johns. The Johns Hopkins name is borne by many institutions that benefited from his bequests, such as Johns Hopkins Hospital and Johns Hopkins University.

57. Third-place finisher in 2004 and 2008 : NADER
Ralph Nader has run as a third-party candidate for the office of President of the United States four times now, in every election from 1996 to 2008. Nader’s name was first first linked with the presidential race in 1971, when the famous Dr. Benjamin Spock offered to stand aside as candidate in the 1972 race if Nader would agree to run, but he declined.

Down
1. Language of Navarre : BASQUE
Basque is the language of the Basque people who inhabit northeastern Spain and some of southwestern France. The origins of the language seem to be unclear, and it’s not obvious whether or not Basque is related to any other language spoken today.

3. Places for races : STADIA
The Greek word “stadion” was a measure of length, about 600 feet. The name “stadion” then came to be used for a running track of that length. That “running track” meaning became our contemporary word “stadium”.

6. One of the Bushes : JEB
I always thought that Jeb was an American nickname for James or Joseph but I must be wrong, because George and Barbara’s son John Ellis Bush is called “Jeb”. A kind blog reader has suggested the the name “Jeb” may have been chosen as JEB are the initials of John Ellis Bush.

10. Took a powder : LEFT
The phrase “to take a powder” means “to scram, vanish”. This meaning was first recorded in the 1920s, and may derive from the medical instruction “take a powder”, which may imply having to make a quick exit!

11. Milk additive : OVALTINE
Ovaltine is a milk-flavoring product that was developed in Berne, Switzerland in the early 1900s. It is still called by its original name in its native Switzerland, namely “Ovomaltine”. The “ovo-maltine” name reflects the main ingredients back then, egg and malt.

15. Only so-called “Decade Volcano” in the continental U.S. : RAINIER
Mount Rainier is an active volcano in the state of Washington in the Cascade Mountain Range. Native Americans first called the peak “Tacoma” meaning “mother of waters”. When Captain George Vancouver discovered Puget Sound in 1792, he named the peak in honor of his friend Rear Admiral Peter Rainier. There have been movements to change the name back to Tacoma, but these seem to have petered out (pun intended!).

There are 16 so-called “Decade Volcanoes” in the world. These volcanoes were listed as part of the UN-sponsored International Decade for Natural Disaster Reduction. A Decade Volcano is one that is deemed to deserve close study due to its history of eruptions and proximity to population centers.

23. Star of Buñuel’s “Belle de Jour” : DENEUVE
Catherine Deneuve is a French actress who was born in occupied Paris in 1943. Deneuve is a well-respected and prolific movie actress. She appeared in her 100th film in 2008.

26. Group that offers “protection” : MAFIA
Apparently “Cosa Nostra” is the real name for the Italian Mafia. “Cosa Nostra” translates as “our thing” or “this thing of ours”. The term first became public in the US when the FBI managed to turn some members of the American Mafia. The Italian authorities established that “Cosa Nostra” was also used in Sicily when they penetrated the Sicilian Mafia in the 1980s. The term “mafia” seems to be just a literary invention that has become popular with the public.

35. Title sort of person in 2008’s Best Picture : SLUMDOG
The brilliant film “Slumdog Millionaire” is a screen adaptation of a 2005 novel by Indian author Vikas Swarup. This low-budget movie won eight Oscars in 2008. I reckon it turned a profit …

36. Purina product : CAT CHOW
Purina began operations in 1894, as an operation for producing feed for farm animals. A few years later, in 1902, the Ralston name was introduced when Webster Edgerly joined the business, Edgerly was the founder of a controversial social movement called Ralstonism. Central to the movement was personal health, with RALSTON standing for Regime, Activity, Light, Strength, Temperation, Oxygen and Nature.

41. Brand in the frozen food aisle : ORE-IDA
Ore-Ida frozen foods are all made with potatoes. The company is located in Oregon, just across the border from Idaho. “Ore-Ida” is a melding of the two state names.

42. “Northanger Abbey” novelist : AUSTEN
Jane Austen is a favorite author of mine, and I have been lucky enough to have visited many of the sites in England that have been associated with her life. Favorite of these is a large cottage in the village of Chawton in Hampshire, England. Austen moved to Chawton from Bath, and there wrote and published her most famous novels, including “Sense and Sensibility”, “Pride and Prejudice” and “Mansfield Park”.

45. ___ dish : PETRI
Julius Richard Petri was a German bacteriologist and was the man after whom the Petri dish is named. The petri dish can have an agar gel on the bottom which acts a nutrient source for the specimen being grown and studied, in which case the dish plus agar is referred to as an “agar plate”.

50. Author Jaffe : RONA
Rona Jaffe was an American novelist perhaps most famous for two of her books, “The Best of Everything” and “Mazes and Monsters”. “The Best of Everything” was published in 1958 and has been compared with the HBO television series “Sex and the City” as it depicts women in the working world. “Mazes and Monsters” was published in 1981 and explores a role-playing game similar to Dungeons & Dragons and the impact it has on players.

52. Détente : THAW
“Détente” is a French word meaning “loosening, reduction in tension” and in general it is used to describe the easing of strained relations in a political situation. In particular, the policy of détente came to be associated with the improved relations between the US and the Soviet Union in the seventies.

54. Shell filler : TNT
TNT is an abbreviation for trinitrotoluene. Trinitrotoluene was first produced in 1863 by the German chemist Joseph Wilbrand, who developed it for use as a yellow dye. TNT is relatively difficult to detonate so it was on the market as a dye for some years before its more explosive properties were discovered.

The artillery projectile termed a “shell” might contain TNT as its explosive charge.