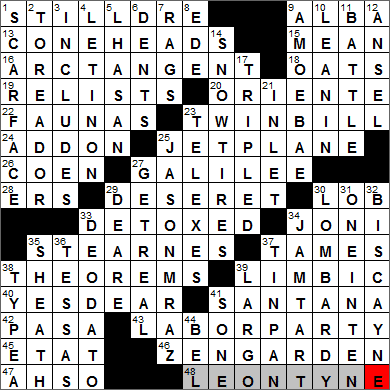 9. “Sin City” actress : ALBA
Actress Jessica Alba got her big break when she was cast in the Fox science fiction show “Dark Angel”. Alba had a tough life growing up as she spent a lot of time in hospital and so found it difficult to develop friendships. As a youngster she twice had a collapsed lung, frequently caught pneumonia, suffered from asthma, had a ruptured appendix and a tonsillar cyst. On top of all that she acknowledges that she suffered from obsessive-compulsive disorder as a child. It seems that she has really turned her life around …

“Sin City” is a 2005 thriller movie that is based on a series of graphic novels by Frank Miller. Miller also co-directs the film. “Sin City” has a large ensemble cast that includes Bruce Willis, Jessica Alba, Benicio del Toro, Clive Owen and Mickey Rourke. Frank Miller even plays a role himself.

13. Classic TV family : CONEHEADS
“The Coneheads” first appeared in a “Saturday Night Live” sketch in 1977. The three family members back then were played by Dan Ackroyd (father), Jane Curtin (mother) and Laraine Newman (daughter). The characters became so popular they were featured in a “Coneheads” movie in 1993.

18. Wild things? : OATS
Traditionally, wild oats was a crop that one would regret sowing instead of “good grain”. Young and tempestuous people were rash enough to sow their wild oats, and had yet to comprehend their folly. Over time, to “feel one’s oats” came to mean “be lively and confident”.

20. Cuban province where Castro was born : ORIENTE
Oriente was one of six provinces of Cuba, up until 1976 when it was split up into five new provinces. The name “Oriente” is now used for the eastern part of the country. “Oriente” is the Spanish for “east”.

25. Mode of transportation in a 1969 #1 hit : JET PLANE
“Leaving on a Jet Plane” was written by John Denver in 1966, but the most famous recording of the song was by Peter, Paul and Mary in 1969. The lyrics of the song are meant to portray a travelling musician saying goodbye to his beloved as he heads off on the road yet again. Because the song was released at the height of the Vietnam War, it was widely assumed that the words actually referred to a soldier heading off on a plane to fight overseas.

26. Filmdom family name : COEN
I think it’s great to see two brothers working together and being so successful. Joel and Ethan Coen are two movie producers and directors who both live in New York City. The Coen brothers do love the movie-making business and they even married industry “insiders”. Ethan’s wife is film editor Tricia Cooke, and Joel is married to one of my favorite actresses, the lovely Frances McDormand.

29. Informal name of the 45th state : DESERET
When Mormon pioneers were settling what is today the state of Utah, they referred to the area as Deseret, a word that means “beehive” according to the Book of Mormon. Today Utah is known as the Beehive State and there is a beehive symbol on the Utah state flag.

34. Songbird Mitchell : JONI
Joni Mitchell is a Canadian singer and songwriter from Fort Macleod in Alberta. Mitchell is perhaps best known for her recordings “Big Yellow Taxi” and “Woodstock”.

35. Turkey ___, baseball Hall-of-Famer from the Negro leagues : STEARNES
Norman “Turkey” Stearnes was an outfielder who played baseball in the Negro Leagues. Stearnes earned his nickname as a boy, because he had a funny gait when running. Stearnes was inducted into the Baseball Hall of Fame in 2000, 21 years after he passed away.

39. ___ system, part of the brain that regulates emotion, behavior and long-term memory : LIMBIC
The limbic system is the name given to a collection of structures in the brain located under the cerebrum and on either side of the thalamus. Apparently the limbic system is responsible for our emotional lives and the formation of memories.

40. 2000s CBS sitcom : YES, DEAR
“Yes Dear” is a TV sitcom that originally aired from 2000 to 2006. The show is about two couples living together in the same house, as the two wives are sisters. One couple owns the house, the other is “lodging”.

43. Golda Meir and Yitzhak Rabin led it : LABOR PARTY
The Israeli Labor Party is also known locally as HaAvoda. The party was founded in 1968.

46. Place of outdoor meditation : ZEN GARDEN
Japanese Zen gardens are inspired by the meditation gardens of Zen Buddhist temples. Zen gardens have no water in them, but often there is gravel and sand that is raked in patterns designed to create the impression of water in waves and ripples.

47. Mock words of understanding : AHSO
The slang term “ahso” is used in American English to mean “I see”. The term derives from the Japanese expression “Ah so desu ka” meaning “Oh, that’s how it is”.

48. Price of an opera? : LEONTYNE
Leontyne Price is a soprano from Laurel, Mississippi. Before retiring from the opera stage, Price was a leading artist at the Metropolitan Opera in New York, one of the first African-American singers to be so honored.

Down
1. Gangster nickname : SCARFACE
When Al Capone was a young man, he worked as a bouncer in nightclubs and saloons. He was working the door of a Brooklyn night spot one evening when he apparently insulted a woman, sparking off a fight with her brother. In the tussle, Capone’s face was slashed three times. Capone wasn’t too proud of the incident, nor the “Scarface” moniker. He always hid the scars as best he could when being photographed, and was also fond of telling people that the scars were from old war wounds.

2. “Carmen” figure : TOREADOR
“Toreador” is an old Spanish word for a bullfighter, but it’s a term not used any more in Spain nor in Latin America. In English we use the term “toreador”, but in Spanish a bullfighter is a “torero”.

Georg Bizet was a French composer active in the Romantic era. Bizet’s most famous work has to be his opera “Carmen”. “Carmen” initially received a lukewarm reception from the public, even though his fellow composers had nothing but praise for it. Sadly Bizet died at only 36 years of age, before he could see “Carmen’s” tremendous success. I saw my first ever live performance of “Carmen” not too long ago.

5. From the Forbidden City : LHASAN
Lhasa is the capital city of Tibet, and the name “Lhasa” translates as “place of the gods”. However, Lhasa used to be called Rasa, a name that translates into the less auspicious “goat’s place”. Lhasa was also once called the “Forbidden City” due to its inaccessible location high in the Himalayas and a traditional hostility exhibited by residents to outsiders. The “forbidden” nature of the city has been reinforced since the Chinese took over Tibet in the early 1950s as it has been difficult for foreigners to get permission to visit Lhasa.

8. Dutch city ESE of Amsterdam : EDE
Ede is a small town in the Netherlands located between the cities of Arnhem and Utrecht.

9. Shape shifters? : AMOEBAE
An ameba (or “amoeba” as we spell it back in Ireland) is a single-celled microorganism. The name comes from the Greek “amoibe”, meaning change. The name is quite apt, as the cell changes shape readily as the ameba moves, eats and reproduces.

12. First name in shooting : ANSEL
As an amateur photographer, I have been a big fan of the work of Ansel Adams for many years and must have read all of his books. Adams was famous for clarity and depth in his black and white images. Central to his technique was the use of the zone system, his own invention. The zone system is a way of controlling exposure in an image, particularly when there is a high contrast in the subject. Although the technique was developed primarily for black & white film, it can even apply to digital color images. In the digital world, the main technique is to expose an image for the highlights, and one or more images for the shadows. These images can then be combined digitally giving a final photograph with a full and satisfying range of exposures.

17. Didn’t make it home, say : TRIPLED
A baseball player who hits a triple doesn’t quite make it to home.

23. E-mail ancestors : TELEXES
Telex grew out of the world of the telegraph. What Telex brought to telegraphy was the ability to route messages. Instead of having to talk to an operator to route a particular message to the intended party, the user of a telex could route the message directly to another telex machine by way of a rotary dial, very similar to that on a telephone.

25. “Wordplay” vocalist, 2005 : JASON MRAZ
Jason Mraz is a singer-songwriter from Mechanicsville, Virginia. Jason is of Czech descent, and his name “Mraz” translates as “frost”.

30. Italian region that’s home to Milan : LOMBARDY
There are twenty administrative regions of Italy, on of which is Lombardy, which is in the very north of the country. Lombardy’s capital is the city of Milan.

32. Florida’s Key ___ : BISCAYNE
Key Biscayne is the southernmost of the Barrier Islands lying off the Florida coast. President Nixon owned a compound on the island, made up of three houses which he purchased. He visited Key Biscayne at least fifty times while he was in office, so the President’s residence there was nicknamed “the Florida White House”, or sometimes “the Winter White House”.

33. Musician who arranged the theme for “2001” : DEODATO
Eumir Deodato is a pianist and composer from Brazil, who is also much in demand as a music producer and arranger.

36. Olympic ice dancing gold medalist Virtue and others : TESSAS
Tessa Virtue is a Canadian ice dancer who won the 2010 Olympic championship along with her partner Scott Moir.

37. ___ Alley : TIN PAN
Tin Pan Alley was originally a specific location, West 28th Street between Fifth and Sixth Avenue in Manhattan. The area was associated with the music publishing business from about 1885 to the start of the Great Depression The name itself is possibly a reference to the tinny sound of cheap pianos that were common at the time.

38. Hypercompetitive : TYPE A
The Type A and Type B personality theory originated in the fifties. Back then, individuals were labelled as Type A in order to emphasize a perceived increased risk of heart disease. Type A personality types are so called “stress junkies”, whereas Type B types are relaxed and laid back. But there doesn’t seem to be much scientific evidence to support the linkage between the Type A personality and heart problems.

39. About 40-60 beats per minute : LARGO
Largo is a instruction to play a piece of music with a very slow tempo. “Largo” is the Italian word for “broadly”.

41. Volume measure : SONE
In the acoustic world, the “sone” was introduced as a unit of perceived loudness in 1936.

44. Volume measure : BEL
In the world of acoustics, one bel is equal to ten decibels.