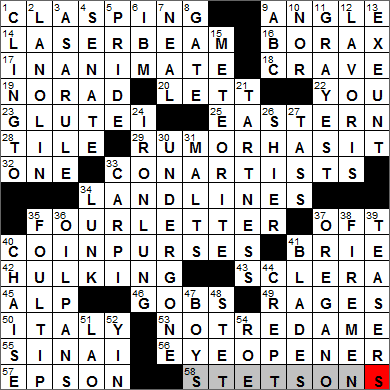 Today’s Wiki-est, Amazonian Googlies
Across
14. Reading light for an audiobook? : LASER BEAM
A CD player reads the information on the disc using a laser beam. The beam is produced by what’s called a laser diode, a device similar to a light-emitting diode (LED) except that a laser beam is emitted. That laser beam is usually red in CD and DVD players. Blu-ray players are so called as they use blue lasers.

16. Detergent component : BORAX
Borax is also known as sodium borate, and is a salt of boric acid. Borax is a white powder that dissolves easily in water. The compound has many uses, for example as an antifungal agent and an antiseptic.

19. Org. always headed by a U.S. general or admiral : NORAD
The North American Defense Command (NORAD) isn’t just a US operation but is a cooperative arrangement between Canada and the United States. The two countries entered into an agreement to establish NORAD in 1958, mainly due to the concern that there would be little or no warning of a missile attack from the Soviet Union that came over the North Pole.

20. Baltic native : LETT
Latvia is one of the former Soviet Socialist Republics. People from Latvia are called Letts.

23. Seat cushions? : GLUTEI
There are three gluteal muscles in the human body, the largest of which is the gluteus maximus. It’s the gluteus maximus which really dictates the shape and size of the human buttocks. In evolutionary terms, the human “glutes” are larger than those in related species because they play a big role maintaining our erect posture.

25. Old airline name : EASTERN
Eastern Air Lines was around from 1927 until 1991. The company was purchased in 1938 by Eddie Rickenbacker, who was a WWI flying ace. Under Rickenbacker’s leadership, Eastern were very successful. However, the airline couldn’t cope with a strike, high fuel prices and deregulation in the nineties, so Eastern went bankrupt in 1991.

41. White spread : BRIE
Brie is a soft cheese, named after the French region from which it originated. Brie is similar to the equally famous (and delicious) camembert.

43. White of the eye : SCLERA
The sclera is the white part of the eye. Usually the sclera is white, but in horses for example, it is black. Really, go check!

45. The Dom is the third-highest one : ALP
The Dom is a peak in Switzerland in the Pennine Alps. The name “Dom” translates as “cathedral”. The mountain is named for Canon Berchtold of Sitten Cathedral who was the first person to survey the area.

55. Suez Crisis setting : SINAI
The Sinai Peninsula is in the eastern part of Egypt, the triangular peninsula bounded by the Mediterranean to the north and the Red Sea to the south. It is the only part of Egypt that lies in Asia as opposed to Africa. The eastern land border of the peninsula is shared with Israel, and Israel occupied the Sinai during the 1956 Suez Crisis and the Six Day War of 1967.

57. Xerox competitor : EPSON
Seiko Epson is a Japanese company, one of the largest manufacturers of printers in the world. The company has its roots in the watch business, roots that go back to 1942. Seiko was chosen as the official timekeeper for the 1964 Summer Olympics in Tokyo and was asked to supply a timer that produced a printed record. This request brought Seiko into the business of printer production. The company developed the world’s first mini-printer for the 1964 Games and called it EP-101 (EP standing for Electronic Printer). In 1975 Seiko introduced the next generation of EP printers which was called EPSON, from “SON of EP”. Cute, huh?

58. Buffalo Bill and Calamity Jane wore them : STETSONS
Stetson is a brand name of hat, manufactured by the John B. Stetson Company of St. Joseph, Missouri. The so called “cowboy hat” that Stetson pioneered was such a success that the company became the largest hat maker in the world, producing over 3.3 million hats per year.

Down
2. Stuff used to soften baseball mitts : LANOLIN
Lanolin is a greasy substance secreted from the skin of woolly animals. It usually extracted from wool sheared from sheep for use in textiles. Medical grade lanolin is used to soothe skin in ointments. It is a relatively hypoallergenic and has antibacterial properties.

5. “A whizzing rocket that would emulate a star,” per Wordsworth : PRIDE
The great English poet William Wordsworth is intrinsically linked with the Lake District in the north of England, where he lived from much of his life. The Lake District is a beautiful part of the country, and I’ve been fortunate enough to visit Dove Cottage in Grasmere a couple of times, where Wordsworth lived with his wife Dorothy …

6. Big name in storage : IBM
IBM was founded as the Tabulating Machine Company in 1896. The company changed its name to the Computing Tabulating Recording Corporation (CTR) in 1911 and was listed on the New York Stock Exchange in 1916. The name of International Business Machines (IBM) was given first to the company’s Canadian subsidiary, and then its South American subsidiary. In 1924, it was decided to adopt the International Business Machines name for the whole company. Good choice …

7. Boortz of talk radio : NEAL
Neal Boortz is a radio commentator and author. Boortz is a very vocal libertarian who advocates a complete overhaul of the tax system in the US, as well as the release of non-violent drug offenders.

9. Diane Sawyer’s employer : ABC
Diane Sawyer is the anchor of ABC’s news program “ABC World News”. Sawyer started her career in the Nixon White House where she was hired by the Press Secretary at the time, Ron Ziegler. She worked with Nixon to help him write his memoirs after he left office and helped prepare the ex-president for his famous series of television interviews with David Frost in 1977. Sawyer is married to Mike Nichols, the noted film director.

10. Land on the Arctic Cir. : NOR
Norway has been ranked as the country in the world with the highest standard of living almost every year since 2001. Norway is rich in natural resources and has a relatively low population. The people benefit from a comprehensive social security system, subsidized higher education for all citizens and universal health care.

13. Shakespearean stage direction : EXEUNT
“Exeunt omnes” is a stage direction instructing everyone on stage to exit. The term translates from Latin as “they all go out”.

15. Depression creator : METEORITE
A shooting star is what we call the visible path of a meteoroid as is it enters the earth’s atmosphere. Almost all meteoroids burn up, but if one is large enough to survive and reach the ground, we call it a meteorite. The word “meteor” comes from the Greek “meteōros” meaning “high in the air”.

24. Old-fashioned respirator : IRON LUNG
The Iron Lung was invented to treat coal gas poisoning, but was most famously used as a life-support system for polio victims in the mid-1950s. We humans are “negative pressure” breathers, meaning that air is drawn into the body by the ribs expanding and the diaphragm drawing downwards. The pressure inside the chest cavity become lower as a result of the increased space, and the lungs fill with air to equalize that pressure with the atmosphere. The chest cavity then contracts to expel exhausted air from the lungs. A patient in an iron lung lies on a bed surrounded by a sealed chamber, with just the head and neck protruding. As the patient cannot breathe for himself or herself, pumps reduce the pressure surrounding the patient cause the chest cavity to expand, and pull in air through the mouth and nose. The chamber pressure is then increased, causing the chest cavity to collapse, and air is expelled.

27. Communist bloc news source : TASS
TASS is the abbreviation used for the former news agency that had the full name Telegraph Association of the Soviet Union (Telegrafnoe Agentstvo Sovetskovo Soyuza). When the Soviet Union dissolved in 1992, the Moscow-based agency’s scope changed along with its name. It is now known as the Information Telegraph Agency of Russia (ITAR-TASS).

33. Wrist bones : CARPI
The human wrist is known anatomically as the carpus. The carpal bones allow the wrist its remarkable range of motion.

48. Amendment to an amendment : STET
“Stet” is a Latin word meaning “let it stand”. In editorial work, the typesetter is instructed to disregard any change previously marked by writing the word “stet” and then underscoring that change with a line of dots or dashes.

51. Southeast Asian language : LAO
The official name for the country of Laos is the Lao People’s Democratic Republic. In the Lao language, the country’s name is “Meuang Lao”. The French ruled Laos as part of French Indochina, having united three separate Lao kingdoms. As there was a plural of “Lao” entities united into one, the French added the “S” and so today we tend to use “Laos” instead of “Lao”.

54. Ikura or tobiko : ROE
In Japanese cuisine, the roe of salmon is called “ikura” and the roe of flying fish is called “tobiko”.