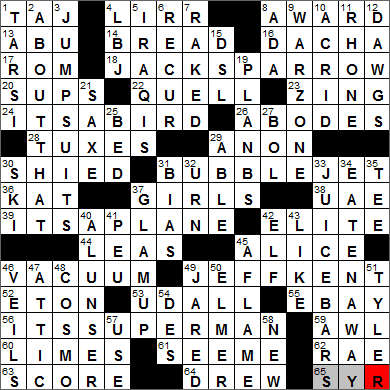 18A. Film lead character featured in a Disney World attraction : JACK SPARROW
24A. Remark about the end of 18-Across : IT’S A BIRD

13. ___ Nazir (“Homeland” character) : ABU
“Homeland” is a psychological drama shown on Showtime about a CIA officer who is convinced that a certain US Marine is a threat to the security of the United States. The show is based on a series from Israeli television called “Hatufim” (Prisoners of War”). I saw the first series of this show and highly recommend it …

16. Black Sea getaway : DACHA
Dachas are usually second homes in Russia and the former Soviet Union that are located outside the city limits in rural areas. Residents/tenants of dachas are often called dachniks.

17. Land on the Black Sea: Abbr. : ROM
Romania sits just east of Hungary and north of Bulgaria in Europe. Romania was formed from the union of two principalities in 1859, Moldavia and Wallachia. The Kingdom of Romania grew larger in size after WWI with the addition of three new regions, including the “vampirish” Transylvania.

18. Film lead character featured in a Disney World attraction : JACK SPARROW
Captain Jack Sparrow is the protagonist in the “Pirates of the Caribbean” series of movies. Sparrow is of course played by Johnny Depp. Depp has said that he based his portrayal of Sparrow partly on the Rolling Stones guitarist Keith Richards. I could believe that …

26. Hamlet’s parts : ABODES
A hamlet is a small village, especially one without a church.

28. They’re often seen with bows : TUXES
The style of men’s evening dress called a “tuxedo” was apparently first worn to a country club event in 1886 in New York. The use of a dark dinner jacket without tails became fashionable at the club with the members, and the tradition spread from there. The country club was located in Tuxedo Park, New York, giving the style of dress its name.

29. By and by : ANON
“Anon” originally meant “at once” and evolved into today’s meaning of “soon” apparently just because the word was misused over time.

31. Kind of printer for home or office : BUBBLE JET
A bubble jet is a type of inkjet printer. An inkjet printer shoots tiny droplets of ink onto paper to create an image. The droplets of ink can be formed in several ways. In a bubble jet, tiny resistors heat the ink and vaporize it, causing it to be ejected from the print head.

36. Kit ___ : KAT
I grew up eating Kit Kat bars as a kid, as the chocolate confection has been around since the thirties. Kit Kats didn’t hit the shelves in the US until the seventies. I’ve seen new varieties of Kit Kat over in the UK, such as an orange-flavored version, but haven’t seen anything like that over here.

38. Mideast inits. : UAE
The United Arab Emirates (UAE) is a federation of seven emirates (states) in the Middle East. Included in the seven are Abu Dhabi and Dubai, with the city of Abu Dhabi being the UAE capital and cultural center.

44. Bucolic settings : LEAS
The word “bucolic”, meaning rustic or rural, comes to us from the Greek word “boukolos” meaning “cowherd”.

45. Short-story writer Munro : ALICE
Alice Munro is a writer from southwestern Ontario in Canada. As a proud (and quite rightly so!) Canadian blog reader pointed out, Munro won the 2013 Nobel Prize for Literature.

49. 2000 N.L M.V.P. who played for the Giants : JEFF KENT
Jeff Kent is a retired professional baseball player who played at second base. Kent scored more home runs than any other second baseman in history.

52. Kind of jacket : ETON
An Eton jacket is usually black, cut square at the hips and with wide lapels. It is named for the design of jacket that is worn by the younger students at Eton College just outside London.

53. Politico Mo : UDALL
Mo Udall was a US Representative from Arizona. Prior to entering politics, Udall played professional basketball with the Denver Nuggets. In 1976, Udall made a run for the Democratic Party’s presidential nomination. He lost to then-Governor Jimmy Carter.

55. Owner of Half.com : EBAY
Half.com is an eBay company that allows sellers to offer items at fixed prices to potential buyers. Soon after its founding in 1999, the company made a deal with the town of Halfway, Oregon to change its name to Halfway.com for twelve months as part of an advertising campaign.

56. Remark about the end of 49-Across : IT’S SUPERMAN
(49A. 2000 N.L M.V.P. who played for the Giants : JEFF KENT)
Superman’s comic book creators gave their title character’s alter-ego the name “Clark Kent” by melding the names of Clark Gable and Kent Taylor, two leading men of the cinema at the time Superman was created. However, they modeled Clark’s character more on the silent film actor Harold Lloyd.

62. Arctic explorer John : RAE
John Rae was a Scottish explorer, who took on the task of searching for the ill-fated Franklin Expedition of 1845. The Franklin Expedition was itself searching for the elusive Northwest Passage through the Arctic Ocean connecting the Atlantic to the Pacific. John Rae stirred up much controversy back in England when he reported evidence of cannibalism among the ill-fated Franklin explorers.

65. Turk. neighbor : SYR
The modern state that we know as Syria was established after WWI as a French mandate. Syria was granted independence from France in 1946.

Down
1. Tibia connections : TARSI
The tarsals (also “tarsi”) are the ankle bones, equivalent to the carpals in the wrist.

4. Subj. of an Austin library and museum : LBJ
The Lyndon Baines Johnson Presidential Library is located beside the LBJ School of Public Affairs building of the University of Texas at Austin. The Library opened in 1971 with a ceremony attended by President Johnson and President Nixon.

5. Mosul residents : IRAQIS
Mosul lies in northern Iraq and is the third largest city in the country, after Baghdad and Basra.

8. Tube inits. : ADA
Many tubes of toothpaste contain an endorsement from the American Dental Association (ADA).

9. Where a photographer might take shots? : WAR ZONE
A photographer working in a war zone might get shot at while taking shots with his or her camera.

11. View from Valence : RHONE
Valence is a commune in southeast France located on the left bank of the Rhône.

21. ___-Coburg and Gotha (former British ruling family) : SAXE
Saxony was the name given at different times in history to states along the Elbe river in central Europe. As the various states broke up, they spawned many duchies that retained the name “Saxe”. The most famous of these duchies was probably Saxe-Coburg and Gotha, two united duchies in Germany that ceased to exist after WWII. A notable branch of the Saxe-Coburg and Gotha House is the British Royal Family, as Queen Victoria was married to Prince Albert of Saxe-Coburg and Gotha. King George V of the United Kingdom changed the name of the family to the House of Windsor in a politically sensible move during WWI.

27. Land on one side of Lake Titicaca: Abbr. : BOL
Lake Titicaca is the largest lake in South America, and the highest navigable lake in the world (by “large” commercial vessels). Lake Titicaca is located in the Andes, on the border between Peru and Bolivia.

40. Four-time Indy 500 winner : AL UNSER
The Unser family seems to have racing cars in its blood. Al Unser, Sr. won the Indy 500 on four occasions. Al’s brother Jerry was the first of the Unsers to compete at Indianapolis. Al’s other brother Bobby, won the Indy three times. Al’s son, Al Junior, won the Indy twice. Al Junior’s son is also a racing driver who competes at the Indy Speedway.

41. Little, in Lille : PEU
Lille is a large city in the very north of France sitting right on the border with Belgium. The name “Lille” is a derivation of the term “l’isle” meaning “the island”.

42. Dobby, e.g., in the Harry Potter books : ELF
In the “Harry Potter” universe, Dobby is a house elf (basically a slave) used by the Malfoy family.

47. Ghost story? : ATTIC
One might encounter ghosts in the attic, if you believe in that sort of thing …

48. Certain cocktail, informally : COSMO
Like so many famous cocktails, the actual origins of the cosmopolitan are disputed. It is a nice drink though. One of the standard recipes is 4 parts citrus vodka, 1.5 parts Cointreau, 1.5 parts lime juice and 3 parts cranberry juice.

49. Leto of “My So-Called Life” : JARED
Jared Leto is an actor and musician. In the world of music, Leto is the lead singer and rhythm guitarist for the rock band 30 Seconds to Mars. In the film world his most critically acclaimed role was that of a heroin addict in “Requiem for a Dream”. He also appeared in “American Psycho”, “Panic Room” and “Lord of War”.

The television series called “My So-Called Life” is described as a “teen drama”. Nope, not for me …

50. Hunter who says “Be vewy vewy quiet” : ELMER
Elmer Fudd is one of the most famous of all the Looney Tunes cartoon characters, the hapless nemesis of Bugs Bunny. If you have never seen it, check out Elmer and Bugs in the marvelous “Rabbit of Seville”, a short cartoon that parodies Rossini’s “Barber of Seville”. Wonderful stuff …

51. Texas city named for a president : TYLER
Tyler, Texas is nicknamed “Rose Capital of the World” as it plays a major role in the US’s rose-growing industry and is home to the country’s largest rose garden. The city is named for President John Tyler in recognition of the support he gave to the admission of Texas into the United States.

54. Notre-Dame-___-Champs (Paris Métro stop) : DES
Notre-Dame-des-Champs is a station on the Paris Métro.

The Paris Métro is the busiest underground transportation system in western Europe, carrying about 4.5 million passengers a day, about the same as the New York City Subway. The system took its name from the company that originally operated it: “La Compagnie du chemin de fer métropolitain de Paris”, which was shorted to “Métro”. The term “Metro” was then adopted for similar systems in cities all over the world.