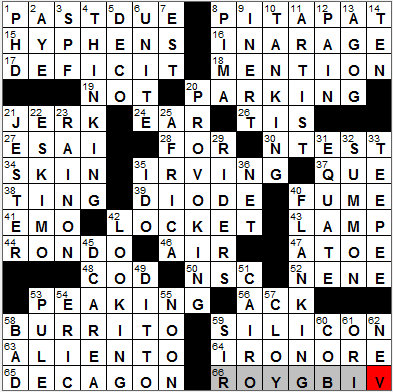 
Today’s Wiki-est, Amazonian Googlies
19. Forget-me-___ : NOT
The plants known as forget-me-nots were given their distinctive name first in French: “ne m’oubliez pas”. “Forget-me-not” is simply a translation into English.

24. Floppy feature of a basset hound : EAR
The Basset Hound wouldn’t be my favorite breed of dog, to be honest. They do have a great sense of smell with an ability to track a scent that is second only to that of the Bloodhound. The name “Basset” comes from the French word for “rather low”, a reference to the dog’s short legs.

26. “My country, ___ of thee” : ‘TIS
The patriotic song “America” is also known by its first line, “My Country, ‘Tis of Thee”. The song was written by Samuel Francis Smith in 1831, and was the de facto national anthem of the country until “The Star-Spangled Banner” was declared the official anthem.

27. Morales of “NYPD Blue” : ESAI
Esai Morales is best known for his role in the 1987 movie “La Bamba”, which depicted the life of Ritchie Valens and his half-brother Bob Morales (played by Esai).

“NYPD Blue” is a police drama that was originally aired on television in 1993, and ran until 2005.

30. Mushroom cloud creator, briefly : N-TEST
The first test of a hydrogen bomb was in 1954 at Bikini Atoll in the Marshall Islands. It may have been a technical success but it was an environmental disaster, largely because the actual yield of 15 megatons was unexpected (the military anticipated only 4-6 megatons). The resulting nuclear fallout caused many deaths, and led to birth defects in generations to come.

35. Songwriter Berlin : IRVING
Irving Berlin’s real name was Israel Baline, a Russian immigrant who came to New York with his family in 1893. In the words of composer Jerome Kern, “Irving Berlin has no place in American Music – he is American music”. That would seem to ring true looking at a selection of his hits: “Alexander’s Ragtime Band”, “White Christmas”, “There’s No Business Like Show Business” and of course, “God Bless America”. Berlin was married twice. His first marriage was in 1912, to Dorothy Goetz. Sadly, Dorothy died just a few months later from typhoid fever that she contracted on their honeymoon in Havana. His second marriage was to a young heiress, Ellin Mackay. That marriage lasted a lot longer, until 1988 when Ellin passed away at the age of 85.

39. Electron tube : DIODE
A diode is a component in a circuit, the most notable characteristic of which is that it will conduct electric current in only one direction. Some of those vacuum tubes we used to see in old radios and television were diodes, but nowadays almost all diodes are semiconductor devices.

41. Rock music genre : EMO
The musical genre of “emo” originated in Washington D.C. in the 80s, and takes its name from “emotional hardcore”. Not my cup of tea …

43. Genie’s home : LAMP
The “genie” in the bottle takes his or her name from “djinn”. “Djinns” were various spirits considered lesser than angels, with people exhibiting unsavory characteristics said to be possessed by djinn. When the book “The Thousand and One Nights” was translated into French, the word “djinn” was transformed into the existing word “génie”, because of the similarity in sound and the related spiritual meaning. This “génie” from the Arabian tale became confused with the Latin-derived “genius”, a guardian spirit thought to be assigned to each person at birth. Purely as a result of that mistranslation the word genie has come to mean the “djinn” that pops out of the bottle. A little hard to follow, I know, but still quite interesting …

48. Atlantic food fish : COD
In the British Isles, the most common fish that is used in traditional “fish and chips” is Atlantic cod. Cod has been overfished all over the world, and is now considered to be an endangered species by many international bodies.

50. Foreign policy grp. : NSC
The National Security Council (NSC) was created by President Harry S. Truman in 1947. The NSC is chaired by the sitting president, and meets in the White House Situation Room.

52. Hawaii’s state bird : NENE
The bird called a nene is a native of Hawaii, and is also known as the Hawaiian goose. The name “nene” is imitative of its call. When Captain Cook landed on the islands in 1778, there were 25,000 nene living there. By 1950, the number was reduced by hunting to just 30 birds. Conservation efforts in recent years have been somewhat successful.

59. Element used to make semiconductors : SILICON
Silicon is a semiconducting material. This means it is sort of halfway between an insulator and a conductor. Silicon acts as an insulator until a voltage is applied, an if that voltage is sufficiently high then the silicon becomes a conductor. The electronics industry uses this phenomenon to make devices that can “switch” (turn from insulator to conductor) by application of a voltage.

64. Raw material for a steel mill : IRON ORE
Iron ore comes in a number of different forms, like magnetite (the most magnetic of all minerals) and hematite (the most commonly exploited iron ore).

66. Rainbow mnemonic : ROY G BIV
“Roy G. Biv” is an acronym for the colors in a rainbow:

Down
1. Advanced deg. : PHD
PhD is an abbreviation for “philosphiae doctor”, Latin for “teacher of philosophy”.

3. Beach lotion letters : SPF
In theory, the sun protection factor (SPF) is a calibrated measure of the effectiveness of a sunscreen in protecting the skin from harmful UV rays. The idea is that if you wear a lotion with say SPF 20, then it will take 20 times as much UV radiation to cause the skin to burn if using lotion, than without it. I say, just stay out of the sun …

5. Art ___ (1920s-’30s movement) : DECO
Art deco is the name given to a style of design and architecture of the 1920s that actually had its roots in Belgium and then spread throughout Europe before arriving in North America. Celebrated examples of art deco architecture are the magnificent Chrysler Building in New York City completed in 1930, and the GE Building that sits in the middle of Rockefeller Center also in New York City, with the address of “30 Rock”.

8. Fine cotton : PIMA
Pima is a soft cotton that is very durable and absorbent. Pima cotton is named after the Pima Native Americans who first cultivated it in this part of the world.

20. Ruler in a Utah city? : PROVO KING (provoking)
Provo, Utah is a city located just over 40 miles south of Salt Lake City. Provo is home to Brigham Young University. The city was originally called Fort Utah, and the name was changed to Provo in 1850 in honor of Étienne Provost. Provost was a French-Canadian fur trader who was perhaps the first man of European descent to see the Great Salt Lake.

22. Igloo builder : ESKIMO
Although still used in the US, the term “Eskimo” tends to be avoided in Canada and Greenland as it is considered pejorative.

The Inuit word for house is “iglu”, which we usually write as “igloo”. The Greenlandic (yes, that’s a language) word for “house” is very similar, “igdlo”.

33. Cone-shaped shelter : TEEPEE
A tepee (also written as “tipi” and “teepee”) is a cone-shaped tent traditionally made from animal hides that is used by the Great Plains Native Americans. A wigwam is a completely different structure and is often a misnomer for a tepee. A wigwam is a domed structure built by Native Americans in the West and Southwest, intended to be a more permanent dwelling. The wigwam can also be covered with hides but more often is covered with grass, reeds, brush or cloth.

36. Badminton court divider : NET
The game of badminton was developed in the mid-1700s by British military officers in India. There was already an old game called battledore and shuttlecock, so the creation of badminton was essentially the addition of a net and boundary lines for play. The game was launched officially as a sport in 1873 at Badminton House in Gloucestershire in England, giving it the name that we now use.

42. Ruler in a W.C.? : LOO KING (looking)
When I was growing up in Ireland, a “bathroom” was a room that had a bath and no toilet. The separate room with the commode was called “the toilet” or sometimes the W.C. (the water closet). Apparently the term closet was used because in the 1800s when homeowners started installing toilets indoors they often displaced clothes in a “closet”, as a closet was the right size to take the commode. It has been suggested that the British term “loo” comes from Waterloo (water-closet … water-loo), but no one seems to know for sure.

49. “Me too” : DITTO
“Ditto” was originally used in Italian (from Tuscan dialect) to avoid repetition of the names of months in a series of dates. Ditto is just another wonderful import from that lovely land …

51. Egypt’s capital : CAIRO
Cairo is the capital city of Egypt. It is the largest city on the continent of Africa and is nicknamed “The City of a Thousand Minarets” because of its impressive skyline replete with Islamic architecture. The name “Cairo” is a European corruption of the city’s original name in Arabic, “Al-Qahira”.

53. Whine : PULE
“To pule” is to whine or whimper. “Pule” is derived from the French word “piauler” which translates as “to cheep, chirp”.

54. Guitarist Clapton : ERIC
Can you believe that Eric Clapton only had one chart-topper in the US? In 1974 he released a cover version of the Bob Marley classic “I Shot the Sheriff”, and ended up selling more copies of that song than Bob Marley did himself.

57. Fill to excess : CLOY
“To cloy” is to give too much of something rich or sweet, enough to cause disgust or displeasure.

62. Las Vegas’s home: Abbr. : NEV
Back in the 1800s, the Las Vegas Valley was given its name from the extensive meadows (“las vegas” is Spanish for “the meadows”) present in the area courtesy of the artesian wells drilled by local farmers. Las Vegas was incorporated as a city in 1905, in the days when it was a stopping-off point for pioneers travelling west. It eventually became a railroad town, although with the coming of the railroad growth halted as travelers began to bypass Las Vegas. The city’s tourism industry took off in 1935 with the completion of the nearby Hoover Dam, which is still a popular attraction. Then gambling was legalized, and things really started to move. Vegas was picked, largely by celebrated figures in “the mob”, as a convenient location across the California/Nevada state line that could service the vast population of Los Angeles. As a result, Las Vegas is the most populous US city founded in the 20th century (Chicago is the most populous city founded in the 19th century, just in case you were wondering).