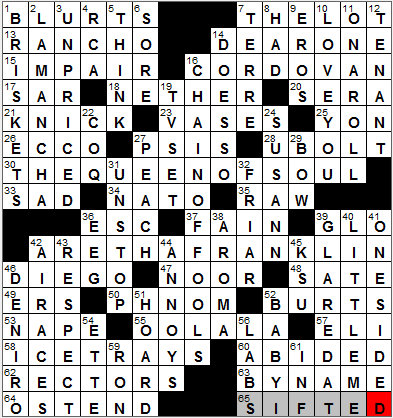 20. Evening on the Arno : SERA
The Arno is the principal river in the Tuscany region of Italy, and passes through the cities of Florence and Pisa. Famously, the Arno flooded in 1966, the worst flood in the region for centuries. There were numerous deaths and extensive destruction of priceless art treasures, particularly in Florence.

21. Walt Frazier or Patrick Ewing : KNICK
The New York Knickerbockers team  is one of only two founding members of the original National Basketball Association that still plays in its original home city. The other is the Boston Celtics.

Walt Frazier is a retired professional basketball player, captain of the New York Knicks when they won their only NBA championships, in 1970 and 1973.

Patrick Ewing is a retired professional basketball player, currently an assistant coach with the Orlando Magic. Ewing was born in Kingston, Jamaica and arrived in the US when he was just 11-years-old. Ewing won Olympic gold medals with the US team in 1984 and 1992.

26. Danish shoe company : ECCO
I have to say, after owning more than one pair, ECCO shoes are the most comfortable in the world …

27. Fraternity letters : PSIS
The Greek letter psi is the one that looks a bit like a trident or a pitchfork.

34. The U.K. is in it, but Ire. is not : NATO
NATO is the North Atlantic Treaty Organization (or OTAN in French, “l’Organisation du Traité de l’Atlantique Nord”). NATO was founded not long after WWII in 1949, and is headquartered in Brussels, Belgium. The first NATO Secretary General was Lord Ismay, Winston Churchill’s chief military assistant during WWII. Famously, Lord Ismay said the goal of NATO was “to keep the Russians out, the Americans in, and the Germans down.”

39. Day-___ : GLO
“Dayglo” is a registered trademark used for an ink or paint that glows when exposed to a black light in a darkened room. When Dayglo paint is viewed in daylight the colors can look particularly vivid because they respond to the UV light that is present in sunlight.

42. Singer born March 25, 1942 : ARETHA FRANKLIN
I think Aretha Franklin, the Queen of Soul, had a tough life. She had her first son when she was 13-years-old, and her second at 15. In 2008, “Rolling Stone” magazine ranked her as number one in their list of the greatest singers of all time.

47. Koh-i-___ diamond : -NOOR
The Koh-i-Noor Diamond was once the largest known diamond in the world, and is part of the British Crown Jewels. It is huge, weighing in at 105 carats. The Koh-i-Noor was mined in India and was owned by Indian royal families for centuries. It was presented to Queen Victoria in 1850 during the days of the British Raj.

48. Fill : SATE
“Sate” is a variant of the earlier word “satiate”. Both can mean either to satisfy an appetite fully, or to eat to excess.

50. ___ Penh : PHNOM
Phnom Penh is the capital of Cambodia, and has been since the French colonized the country in the late 1800s. The name translates from the Khmer language as “Hill of Penh”.

52. ___ Bees (big company in personal care products) : BURT’S
Burt’s Bees is a line of personal care products that uses natural ingredients with minimal processing. The company started out in 1984 as a partnership between two entrepreneurs making candles out of excess beeswax from hives owned by one of the partners. Today the company has over $250 million in sales and is a division of Clorox.

57. Biblical judge : ELI
In the Bible, Eli is a High Priest of Shiloh, and the teacher of Samuel. As such, his story is told in the Book of Samuel.

Down
1. Meat cuts : BRISKETS
Brisket is a cut of beef from the lower chest of the animal. The brisket muscles contain a large amount of connective tissue, so brisket can be a tough cut and needs to be carefully cooked.

The full name of Cervantes’s novel is “The Ingenious Hidalgo Don Quixote of La Mancha”. In the story, Don Quixote is a retired country gentleman who heads out as a knight-errant and who renames himself Don Quixote of la Mancha. In his mind he designates a neighboring farm girl called Aldonza Lorenzo as his lady love, and renames her Dulcinea del Toboso.

4. Elvis’s label : RCA
During WWI, the US government actively discouraged the loss of certain technologies to other countries, including allies. The developing wireless technologies were considered to be particularly important by the army and navy. The government prevented the General Electric Company from selling equipment to the British Marconi Company, and instead facilitated the purchase by GE of the American Marconi subsidiary. This purchase led to GE forming the Radio Corporation of America … RCA.

7. ___ Haute : TERRE
Terre Haute, Indiana is a city close to the state’s western border with Illinois. The city is home to a state prison which in turn is home to the state’s death row. The name “Terre Haute” was chosen by French explorers in the 18th century to describe the location, as “terre haute” is French for “high ground”.

9. God whose name is 6-Down reversed : EROS
As always seems to be the case with Greek gods, Eros and Aphrodite have overlapping spheres of influence. Aphrodite was the goddess of love between a man and a woman, but Eros was the god who stirred the passions of the male.

16. 1967 hit for 42-Across : CHAIN OF FOOLS
“Chain of Fools” is a song written by Don Covay, and is most associated with Aretha Franklin after she recorded it in 1967. The song is actually a rewritten version of a gospel song called “Pains of Life”, which has the exactly same melody.

22. ___ au vin : COQ
The French word “coq” actually means rooster, but a more tender bird is usually chosen for the classic French dish “coq au vin”. The most common wine used for the “vin” is burgundy, but sometimes another red wine is chosen, and you can also find on a menu “coq au Champagne” and “coq au Riesling”.

Jacqueline Susann’s novel “Valley of the Dolls” was first published in 1996 and was a runaway success. The word “dolls” in the title is slang for barbiturate drugs, so-called “downers” or sleep aids. The book was adapted into a film that was nominated for a number of Oscars. There have been plans announced by NBC for a new TV series based on the book, which will air as a daytime drama.

36. Mental image, for short? : EEG
An electroencephalogram (EEG) is a record of electrical activity caused by the firing of neurons within the brain. The EEG might be used to diagnose epilepsy, or perhaps to determine if a patient is “brain dead”.

40. 1962 Neil Simon musical : LITTLE ME
“Little Me” is a musical written by Neil Simon, with music by Cy Colman and lyrics by Carolyn Leigh. The musical is based on a novel by Patrick Dennis with the same title, first published in 1961. Simon’s stage adaptation opened on Broadway in 1962, starring Sid Caesar.

42. Chuck Yeager and others : AIR ACES
Chuck Yeager enlisted as a private in the US Army Air Forces in 1941, starting out as an aircraft mechanic. With the onset of the war at the end of the year, Yeager was able to enroll in flight school. In 1943 he was posted overseas, and flew P-51 Mustangs out of the south of England. He was shot down over France in 1944 and escaped to Spain with the aid of the French Resistance. His 11.5 accredited victories includes five downed aircraft in one mission (making him an “ace in a day”), and one of the first air-to-air kills of a jet fighter.

43. 1967 hit for 42-Across : RESPECT
“Respect” is a song by Otis Redding, and one that he recorded himself in 1965. It became a hit when Aretha Franklin made her famous cover version in 1967. Having said that, the Redding and Franklin versions do have different storylines and musical “feels”.

45. The Wildcats of the Big 12 Conf. : KSU
The athletic teams of Kansas State University (KSU) are called the Wildcats. The Wildcats official “colors” are just one, Royal Purple. There are very few college teams with just one official color. As well as KSU there is Syracuse (Orange) and Harvard (Crimson).

46. Bickle portrayer in “Taxi Driver” : DE NIRO
Robert De Niro is noted for his longtime and highly successful collaboration with the director Martin Scorsese. He is also noted for his commitment as a method actor. Famously, he gained a full 60 pounds in order to play Jake La Motta in the 1980 movie “Raging Bull”.

“Taxi Driver” is a remarkable 1976 movie directed by Martin Scorsese and starring Robert De Niro. The film is remarkable for some great performances, but also for sparking an attempt on the life of President Ronald Reagan. Would-be assassin John Hinkley, Jr. tried to kill the President in order to impress Jodie Foster, with whom he had been obsessed since seeing her performance in the film as child prostitute Iris Steensma.

56. Bell ___ : LABS
Bell Labs dates back to the days of Alexander Graham Bell. The first Bell Labs building was in the carriage house of Bell’s father’s house in Washington, D.C.

59. Howard of Hollywood : RON
Ron Howard sure has come a long way since playing Opie on “The Andy Griffith Show”. He has directed some fabulous movies, including favorites of mine like “Apollo 13”, “A Beautiful Mind” and “The Da Vinci Code”. And today, Opie is a grandfather …

61. Like Beethoven’s Sixth Symphony : IN F
Beethoven’s Symphony No. 6 is also known as the Pastoral Symphony.