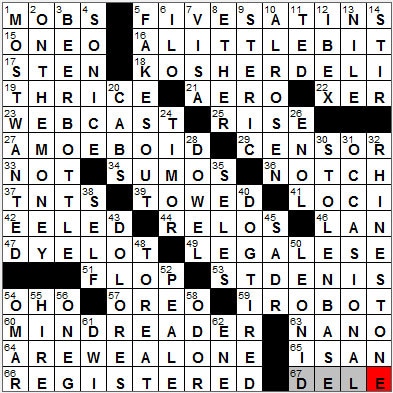 18. Where to request a knish : KOSHER DELI
A knish is a snack food from Germany and Eastern Europe made popular in the US by Jewish immigrants. A knish has a filling often made of mashed potato and ground meat, covered by a dough that is baked or fried.

22. Reagan-era teen, e.g. : XER
The term Generation X originated in the UK where it was the name of a book by Jane Deverson. Her book detailed the results of a study of British youths in 1964, contrasting their lifestyle to those of previous generations. It was Canadian author Douglas Coupland who was responsible for popularizing the term, with his more successful publication “Generation X: Tales for an Accelerated Culture”. By the latest accepted definition, Gen-Xers were born between 1961 and 1981.

23. Modern-day stream : WEBCAST
A webcast is a modern-day version of a telecast, and is a program or presentation that is “broadcast” over the “web”.

25. Burgeon : RISE
“To burgeon” is to sprout, to put forth new buds. The term can also be used more figuratively to mean to grow or develop rapidly.

27. Like some shape shifters? : AMOEBOID
An ameba (or “amoeba” as we spell it back in Ireland) is a single-celled microorganism. The name comes from the Greek “amoibe”, meaning change. The name is quite apt, as the cell changes shape readily as the ameba moves, eats and reproduces.

33. What “-” means in a search query : NOT
Boolean logic is a logic system used in computers. The system takes its name from the man who devised it in 1854, George Boole. Boolean logic is used by many Internet search engines. Using Boolean logic in a search you can combine words into one search term “like this” by using quotation marks. You can also search for pages that contain “term one” but NOT “term two” by searching for “term one” – “term two”.

34. Big ring rivals : SUMOS
Sumo is a sport that is practiced professionally only in the country of its origin, Japan. There is an international federation of sumo wrestling now, and one of its aims is to have the sport accepted as an Olympic event.

37. They cause blowups : TNTS
TNT is an abbreviation for trinitrotoluene. The chemical was first produced by the German chemist Joseph Wilbrand in 1863, who developed it for use as a yellow dye. TNT is relatively difficult to detonate so it was on the market as a dye for some years before its more explosive properties were discovered.

42. Helped supply a sushi restaurant, say : EELED
Sushi is a Japanese dish that has as its primary ingredient cooked, vinegared rice. The rice is usually topped with something, most often fish, and can be served in seaweed rolls. If you want raw fish by itself, then you have to order “sashimi”.

44. Promotions may require them, for short : RELOS
Relocate (relo.) is a real estate term.

46. Chile’s main airline : LAN
LAN Airlines is the flag carrier of Chile. LAN was founded way back in 1929 as Linea Aeropostal Santiago-Arica, making LAN the tenth oldest airline operating in the world today. In 1932 the company changed its name to Línea Aérea Nacional de Chile or LAN Chile, which translates as National Airline of Chile.

47. Yarn identifier : DYE LOT
As the color of dyed yarn can vary slightly from batch to batch, yarn manufacturers put a dye lot number on their product so that consumers can be sure to purchase yarn for a single project that has all been dyed in the same vat.

53. First bishop of Paris : ST DENIS
Not only is Saint Denis (also Denys) the patron saint of France, but he is also the patron saint of Paris. He was the first Bishop of Paris, in the 3rd century AD, and was martyred by having his head chopped off. The legend surrounding this event is that the executed Denis picked up his head and walked for six miles, delivering a sermon the whole way.

57. ___ balls (chocolaty snacks) : OREO
Oreo balls are a homemade dessert or snack usually made around Christmas. As such, oreo balls also go by the unappetizing name of “reindeer droppings”.

59. 1950 sci-fi classic : I, ROBOT
Isaac Asimov was a wonderful science fiction writer, and a professor of biochemistry. He was a favorite author as I was growing up, and I must admit that some hero worship on my part led me to study and work as a biochemist for a short while early in my career. My favorite of his works is the collection of short stories called “I, Robot”.

63. Mini successor : NANO
The iPod Nano is the successor to the iPod Mini and was introduced to the market at the end of 2005. There have been five versions of the Nano to date and the current Nano as well as playing tunes is an FM player, records voice memos, and even has a pedometer!

65. LeAnn Rimes’s “Love ___ Army” : IS AN
LeAnn Rimes has been a country music star since she was 13 years old. In 2008 she disclosed publicly that she suffered from the autoimmune disease psoriasis. She has been active since then in raising money to fight the disease and helping fund cancer research as well. So, not only did Rimes win three Grammy Awards in 1997, she also won a 2009 Humanitarian Award from the Academy of Country Music.

67. Take out : DELE
Dele is the editorial instruction to delete something from a document, and is often written in red.

Down
6. 1969 Peace Prize agcy. : ILO
The ILO (International Labour Organization) is an agency now administered by the UN, but it was established by the League of Nations after WWI. The ILO deals with important issues such as health and safety, discrimination, child labor and forced labor. The organization was recognized for its work in 1969 when it was awarded the Nobel Peace Prize.

7. Certain stamp of approval : VISA
A visa is a usually a stamp in one’s passport, an indication that one is authorized to enter a particular country. The word “visa” comes into English, via French, from the Latin expression “charta visa” meaning “paper that has been seen”, or “verified paper”.

9. Of atoms’ spatial relationships : STERIC
Steric effects refer to the interaction of atoms within a molecule caused by their physical “closeness”.

12. Horned mountain dweller : IBEX
Ibex is a common name for various species of mountain goat. “Ibex” is a Latin name that was used for wild goats found in the Alps and Apennines in Europe.

13. View from Memphis : NILE
Memphis was an ancient city on the River Nile. The ruins of Memphis are located just south of Cairo, Egypt. Memphis was a magnificent city that eventually failed due to the economic success of the city of Alexandria located further down the river and right on the Mediterranean coast.

14. Kerfuffle : STIR
“Kerfuffle” comes from the Scottish “curfuffle”, with both words meaning “disruption”.

24. It’s south of the Banda Sea : TIMOR
Timor is an island in Maritime Southeast Asia. The island is politically divided into West Timor, belonging to Indonesia, and the independent state of East Timor. The name “Timor” comes from a Malay word for “east”, and is used as Timor lies at the eastern end of the Lesser Sunda Islands.

The Banda Sea is part of the Pacific Ocean lying within the Maluku Islands of Indonesia.

26. Hydroxyl compound : ENOL
An enol is an alkene with a hydroxyl group, sort of part-alkene, part-alcohol. The term “enol” therefore, is a portmanteau of “alkene” and “alcohol”.

28. Tinkertoy bit : DOWEL
The Tinkertoy Construction Set was introduced in 1914. You can buy plastic and wooden Tinkertoy sets to this day.

30. One of Henderson’s record 1,406 : STOLEN BASE
Rickey Henderson is a former professional baseball player believed by many to have been the sport’s greatest baserunner. Henderson holds the major league record for career stolen bases, at 1,406. This compares with the second highest number of career stolen bases of “only” 938, by Lou Brock.

32. Bit of paste : RHINESTONE
A rhinestone is a colorless artificial gem made from paste or glass. The original rhinestones were rock crystals that were gathered from the river Rhine in Germany.

35. 2009 Tennis Hall of Fame inductee : SELES
Monica Seles has a Hungarian name as she was born to Hungarian parents in former Yugoslavia. She was the World No. 1 professional tennis player in 1991 and 1992 before being forced from the sport when she was stabbed by a spectator at a match in 1993. She did return to the game two years later, but never achieved the same level of success.

43. Actress-turned-nun Hart : DOLORES
Dolores Hart is the stage name of actress Dolores Hicks. Her big break in acting came when she played the love interest of Elvis Presley in the 1957 movie “Loving You”. While filming in Rome in the sixties, Hart met with Pope John XXIII. It was during this meeting that Hart became aware that she had a vocation, and later joined a convent in Connecticut. There she eventually became Prioress. There is a 2012 documentary film about Hart’s life called “God is the Bigger Elvis”. That might be interesting viewing …

45. Abolhassan Bani-___ (first president of Iran) : SADR
Abulhassan Banisadr is an Iranian politician. Banisadr served as the first President of Iran after the Iranian Revolution in 1979 that overthrew the monarchy. As President he fell out of favor with revolution’s leader, Ayatollah Khomeini, and had to flee the country in 1981. He now lives in a villa in Versailles outside Paris, with protection provided by French police.

52. Guideposts magazine founder : PEALE
Norman Vincent Peale was the author of the best seller “The Power of Positive Thinking”. Peale was a Protestant preacher, and for the latter decades was pastor of the Marble Collegiate Church in Manhattan in New York City. Peale also founded the non-profit group that publishes Guideposts magazine.

54. “‘Tis all a Chequer-board of Nights and Days” poet : OMAR
Omar Khayyam was a Persian with many talents beyond writing poetry. He was also an important mathematician, astronomer and physician. A selection of his poems were translated by one Edward Fitzgerald in a collection called “Rubaiyat of Omar Khayyam”.

56. Universal donor’s type, briefly : O-NEG
The most important grouping of blood types is the ABO system. Blood is classified as either A, B, AB or O, depending on the type of antigens on the surface of the red blood cells. A secondary designation of blood is the Rh factor, in which other antigens are labelled as either positive or negative. When a patient receives a blood transfusion, ideally the donor blood should be the same type as that of the recipient, as incompatible blood cells can be rejected. However, blood type O-Neg can be accepted by recipients with all blood types: A, B, AB or O, and positive or negative. Hence someone with O-neg blood type is called a “universal donor”.

61. Traffic violation, for short : DWI
In some states, there is no longer a legal difference between a DWI (Driving While Intoxicated) and a DUI (Driving Under the Influence). Other states retain that difference, so that by definition a DUI is a lesser offence than a DWI.