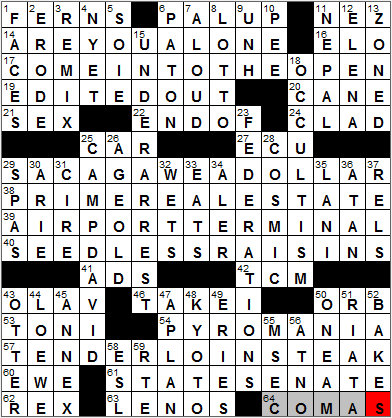 
Today’s Wiki-est, Amazonian Googlies
1. Fiddlehead sources : FERNS
Fiddleheads are those furled fronds that you often see on young ferns. They can be harvested and served as a vegetable.

16. Grp. with the top 10 album “Face the Music” : ELO
ELO of course stands for the Electric Light Orchestra, a symphonic rock group from the north of England. The band’s manager was Don Arden, father of Sharon Osbourne (wife of Ozzy).

20. Supporter of Yoda : CANE
Yoda is one of the most beloved characters in the “Star Wars” series of films. Yoda’s voice was provided by the great modern-day puppeteer Frank Oz of “Muppets” fame.

21. Masters focus : SEX
William Masters and Virginia Johnson were two research partners famous for their investigation into human sexual response. The duo worked together from 1957 until the nineties at Washington University in St. Louis, Missouri.

25. Dodgem feature : CAR
“Dodgems” is the term used in the British Isles for bumper cars.

27. Euro forerunner : ECU
The European Currency Unit (ECU) was an interim unit of account used in the European Community for just over ten years right before the Euro was launched in 1999. The ECU existed alongside the legacy European currencies as the Community worked to stabilize exchange rates prior to the Euro’s launch.

29. It first circulated in 2000 : SACAGAWEA DOLLAR
The Sacagawea dollar has been minted since the year 2000. The obverse side of the coin has the image of Sacagawea, the Shoshone guide who accompanied the Lewis and Clark expedition.

40. Sultanas, say : SEEDLESS RAISINS
When I was growing up Ireland, sultana wasn’t only the name given to the seedless white grape itself, but also to the dried raisin that was derived from the grape. I can’t stand grapes, but I do love sultanas (the raisins). Go figure …

42. It shows many B&W pictures : TCM
Turner Classic Movies (TCM) is one of my favorite television channels, delivering just what its name promises: classic movies.

43. South Georgia’s Prince ___ Harbor : OLAV
Prince Olav Harbor is on the island of South Georgia, a British Overseas Territory in the South Atlantic.

South Georgia is a British Overseas Territory in the South Atlantic over which Argentina claims sovereignty. It was this dispute between the UK and Argentina that led to the Falklands War of 1982.

46. 1960s TV actor whose name looks like a free offer? : TAKEI (i.e. take 1)
Mr. Sulu was of course played by George Takei in the original “Star Trek” series. Takei has played lots of roles over the years and is still very active in television. Did you know that he appeared in the 1963 film, “Pt-109”? Not only did Takei play the helmsman on the Starship Enterprise, he played the helmsman steering the Japanese destroyer that ran down John F. Kennedy’s motor torpedo boat.

53. “Mickey” singer Basil : TONI
Toni Basil is the stage name of the singer Antonia Christina Basilotta. She is best known for her 1982 hit called “Mickey”.

60. Roquefort source : EWE
Roquefort cheese comes from the commune of Roquefort-sur-Soulzon in the South of France.

62. 1976 Rodgers and Harnick musical about Henry VIII : REX
The musical “Rex” is based on the life of King Henry VIII. It opened on Broadway in April 1976, and closed a month and a half later. The music for the show was composed by Richard Rodgers, making “Rex” one of the very few flops penned by Rodgers.

63. Soft, meshed fabrics : LENOS
Leno is a fabric in which the warp yarns are paired and twisted.

Down
3. D.J.’s creation : REMIX
The world’s first radio disk jockey was one Ray Newby of Stockton, California who made his first broadcast in 1909 would you believe? When he was 16 years old and a student, he started to play his records on a primitive radio located in the Herrold College of Engineering and Wireless in San Jose. The records played back then were mostly recordings of Enrico Caruso.

The Somme is a department in the very north of France, in the Picardy region. It is famous as the site of devastating battles during WWI.

8. Match game? : LOTTO
Originally “Lotto” was a type of card game, with “lotto” being the Italian for “a lot”. We’ve used “lotto” to mean a gambling game since the late 1700s.

9. America East sch. : UNH
The University of New Hampshire is the largest university in the state. It was founded as the New Hampshire College of Agriculture and the Mechanic Arts in 1866.

11. Seti River setting : NEPAL
Nepal lies to the northeast of India. Today it is known as the Federal Democratic Republic of Nepal. In 2008, the Communist Party of Nepal won the country’s general election. Soon after, the Assembly voted to change the form of government, moving away from a monarchy and creating a secular republic.

12. Opera’s Obraztsova : ELENA
Elena Obraztsova is a Russian opera singer, from the lovely city of St. Petersburg. She is a mezzo-soprano.

18. Kabbalah : OCCULTISM
Kabbalah is a body of esoteric teachings based on Hebrew Scripture (it says here).

25. Roosevelt established it as Shangri-La : CAMP DAVID
Camp David is the very lovely country retreat used by the US President and family. Technically, Camp David belongs to the US Navy and is known as Naval Support Facility Thurmont. The installation was originally built between 1935 and 1938 as a retreat for government agents and their families. President Franklin D. Roosevelt converted it to a presidential retreat in 1942, naming it Shangri-La. When President Eisenhower was in office he renamed Shangri-La to Camp David, in honor of his father and grandson, both of whom were called David.

29. Pleasant treatment centers : SPAS
The word “spa” migrated into English from Belgium, as Spa is the name of a municipality in the east of the country that is famous for its healing hot springs. The name “Spa” comes from the Walloon word “espa” meaning “spring, fountain”.

Oberhausen is the name of a number of municipalities in Germany.

32. Believers in raising spirits? : WETS
A “wet” is someone who supports legislation allowing the production and sale of alcoholic drinks.

34. Joltin’ Joe, e.g. : ALER
Joe DiMaggio was born not too far from here, in Martinez, California and was the son of Italian immigrants. The family moved to San Francisco when Joltin’ Joe was just a baby. Joe’s Dad was a fisherman, and it was his hope that all his sons would follow him into his trade. But Joe always felt sick at the smell of fish, so fishing’s loss was baseball’s gain.

43. Sleek fur : OTTER
The fur of the sea otter is exceptionally thick. It is in fact the densest fur in the whole animal kingdom.

44. “The Little Prince” composer : LOEWE
Frederick Loewe was a composer best known for his collaborations with the lyricist Alan Jay Lerner, the most famous of which were “My Fair Lady” and “Camelot”.

49. Early New Yorkers : ERIES
The Erie people were Native Americans who lived on the south shore of Lake Erie. The Erie lost out in wars with the Iroquois in the 1700s. The remnants of the Erie people were absorbed into neighboring tribes.

51. Neck tie? : RIATA
A riata is another name for a lariat or a lasso. So it’s a rope with a noose on the end that can be thrown from a horse, usual to catch some animal. “Riata” comes from the Spanish word for lasso: “reata”.

55. Brief moment, briefly : MSEC
A msec is a millisecond, one thousandth of a second.

58. An expat may take it: Abbr. : ESL
English as a Second Language (ESL) is sometimes referred to as English for Speakers of Other Languages (ESOL) and English as a Foreign Language (EFL).