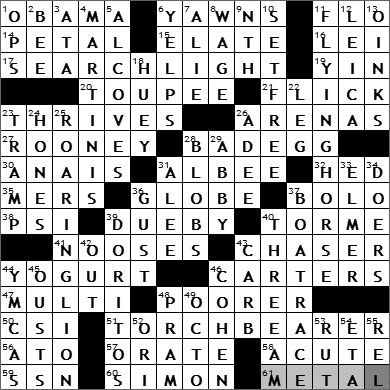 1. President who won the 2009 Nobel Peace Prize : OBAMA
The Peace Prize is the most famous of the five prizes bequeathed by Alfred Nobel. The others are for Physics, Chemistry, Physiology or Medicine and Literature. There is also a Nobel Prize in Economics, awarded along with the original five, but it is funded separately and is awarded “in memory of Alfred Nobel”. Four of the prizes are awarded by Swedish organizations (Alfred Nobel was a Swede) and so the award ceremonies take place in Stockholm. The Peace Prize is awarded by the Norwegian Nobel Committee, and that award is presented in Oslo.

11. Waitress at Mel’s Diner : FLO
Florence Jean “Flo” Castleberry was a waitress in the sitcom “Alice” which aired on CBS in the 70s and 80s. Flo got her own sitcom (called “Flo”) which had a brief run in the early 80s. I saw a few episodes of “Alice”, but that’s about it. Oh, and Flo was played by Polly Holiday.

16. Hawaiian garland : LEI
“Lei” is the Hawaiian word for “garland, wreath”, although in more general terms a “lei” is any series of objects strung together as an adornment intended to be worn.

27. “60 Minutes” pundit Andy : ROONEY
Andy Rooney began his career in newspapers during WWII working for “Stars and Stripes” in London. He had some memorable experiences during the war, including flying on the first American bombing raid over Germany. He was also one of the first American journalists to visit the German concentration camps as they were liberated. He started his “A Few Minutes with Andy Rooney” on CBS’s “60 Minutes” way back in 1978, and so has been on our screens for over 40 years. He’s a cool, cool guy …

30. Diarist Nin : ANAIS
Anaïs Nin was a French author, famous for her journals that she wrote for over sixty years from the age of 11 right up to her death. She also wrote highly regarded erotica, and cited D. H. Lawrence as someone from whom she drew inspiration.

36. Universal picture? : GLOBE
Universal Studios adopted its famous logo in the 1910s. It has changed a little over the years, but has always included an image of Earth, originally with Saturn-like rings around it.

37. Western tie : BOLO
I’ve never worn a bolo tie, and was surprised to discover that they are a relatively recent invention. The first one was apparently produced in Wickenburg, AZ in the late 1940s by a silversmith. The bolo takes its name from the boleadora, an Argentine lariat.

38. Next-to-last Greek letter : PSI
The Greek letter psi is the one that looks a bit like a trident or a pitchfork.

40. Crooner Mel : TORME
Mel Tormé was jazz singer, with a quality of voice that earned him the nickname “The Velvet Fog”. He also wrote a few books, and did a lot of acting. He was the co-author of the Christmas classic known as “The Christmas Song”, which starts out with the line:

Chestnuts roasting on an open fire …

44. Dannon product : YOGURT
Danone is a French company that sells a wide range of food products, as well as bottled water. Here in the US Danone sells under the brand name “Dannon”. Danone owns a number of bottled waters, including Evian, Volvic and the only one that I think is worth buying, Badoit.

46. White House family after the Fords : CARTERS
When President Carter took over office from President Ford in 1977, in his inaugural address he praised the former president for his handling of the Nixon scandals, saying

For myself and for our Nation, I want to thank my predecessor for all that he has done to heal our land.

50. CBS forensic drama : CSI
The TV show “CSI” gets a lot of criticism from law enforcement agencies for its unrealistic portrayal of the procedures and science of criminal investigation. I don’t care though, as I just think it’s fun television. The original “CSI” set in Las Vegas seems to have “gone off the boil”, but the addition of Sela Ward to the cast of “CSI: NY” has really, really raised the level of the sister show set in New York City.

51. Columbia picture? : TORCH BEARER
The original logo for Columbia Pictures was created in 1924, and featured a female Roman soldier with a shield in one hand and a stick of wheat in the other. The “torch lady” was introduced in 1928, and although there have been major revisions over the years, that basic design persists to this day. The current logo was created in 1992 and features the body of a homemaker named Jenny Joseph, with a composite face superimposed. There’s also an urban myth that Annette Bening was the model for one one version of the logo.

59. Info entered on an I.R.S. form : SSN
The main purpose of a Social Security Number (SSN) is to track individuals for the purposes of taxation, although given its ubiquitous use, the SSN is looking more and more like an “universal identity number” to me. The social security number system was introduced in 1936. Prior to 1986, a SSN was required only for persons with substantial income, so many children under 14 had no number assigned. There was concern that a lot of people were claiming children as dependents on their tax forms who did not exist, so from 1986 onwards it was a requirement to get a SSN for any dependents over the ago of 5. Sure enough, in the following year’s tax returns, seven million dependents “disappeared”.

60. Cowell formerly of “American Idol” : SIMON
Simon Cowell was invited to be a judge on “Pop Idol”, a British show that spawned “American Idol”. Cowell was then asked to take part in the US spin-off, and we haven’t stopped seeing him since …

4. Bond likes these “shaken, not stirred” : MARTINIS
Why have a vodka martini shaken and not stirred (as does James Bond, 007)? Well, for one thing the shaken drink tends to be colder. And with more melted ice in the drink, it isn’t as strong. These are my personal observations … no need to write in …

12. Classic German camera : LEICA
Leica is a German optics company, famous for production of cameras. The 1913 Leica was the first practical camera that could use 35mm film, a size chosen because it was already the standard for film used in motion pictures.

18. Nephew of Donald Duck : HUEY
Donald Duck’s nephews are identical triplets called Huey, Dewey and Louie, and they first appeared on the screen in 1938. Once in a while, due to errors in production, a fourth duck can be seen in the background. This little “mistake” is affectionately called “Phooey Duck” by folks in the industry.

25. MGM picture? : ROARING LION
There has been a lion in the logo of the MGM studio since 1924. The original was an Irishman (!), a lion name Slats who was born in Dublin Zoo in 1919. However, it wasn’t until Jackie took over from Slats in 1928 that the roar was heard, as the era of silent movies was coming to an end. The current lion is called Leo, and he has been around since 1957.

28. Things moving in lava lamps : BLOBS
The lava lamp was invented by a British man, Edward Craven-Walker, in 1960. The “lava” is a mixture of wax and carbon tetrachloride, floating in a water/glycerol mix. The wax reduces in density as it picks up heat from the incandescent bulb in the lamp’s base. The wax rises, cools, then sinks to the bottom of the liquid, only to be heated again.

29. “Dear” advice columnist : ABBY
The advice column “Dear Abby” first appeared in 1956. Pauline Phillips was Abby back then, but now the column is written by Jeanne Phillips, her daughter. The full name of the “Abby” pen name is Abigail Van Buren, which Pauline came up with by combining “Abigail” from the biblical Book of Samuel, and “Van Buren” after the former US president.

31. On the safe side, at sea : ALEE
“Alee” is the direction away from the wind. If a sailor points into the wind, he or she is pointing “aweather”.

33. Big name in glue : ELMER
Elsie the Cow is the mascot of the Borden Company. Elsie first appeared at the New York World’s Fair in 1939, introduced to symbolize the perfect dairy product. Elsie was also given a husband, Elmer the Bull, who eventually moved over to the chemical division of Borden where he gave his name to Elmer’s Glue.

37. Regatta : BOAT RACE
The word “regatta” is Venetian dialect and was originally used to describe boat races among the gondoliers of Venice on the Grand Canal back in the mid-1600s.

39. Chips with a Cool Ranch flavor : DORITOS
Doritos are a brand of flavored tortilla chips launched in 1964. The name “Doritos” means “little bits of gold” in Spanish.

44. Places to swim or play b-ball : YMCAS
The YMCA is a worldwide movement that has its roots in London, England. There, in 1844, the Young Men’s Christian Association was founded with the intent of promoting Christian principles through the development of “a healthy spirit, mind and body”. The founder, George Williams, saw the need to create YMCA facilities for young men who were flocking to the cities as the Industrial Revolution flourished. He saw that these men were frequenting taverns and brothels, and wanted to offer a more wholesome alternative.

46. Songwriter Leonard : COHEN
I’ve never been a big fan of the music of Canadian singer Leonard Cohen (don’t all yell at me at the same time!).

48. British baby buggy : PRAM
Another word used in the UK that’s rarely used over here is “pram”, which in my day was the most common term for what is/was called a baby carriage in the US. “Pram” is short for “perambulator”.