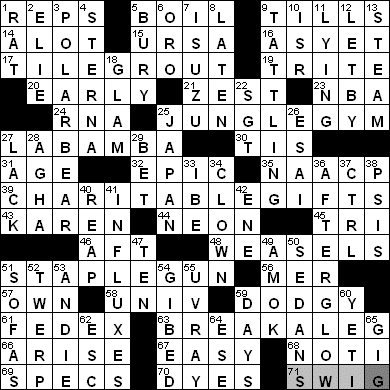 CROSSWORD SETTER: Michael Barnhart
THEME: BREAK A LEG … all the theme answers feature a broken LE-G i.e. the answer contains a word ending in -LE followed by a word starting with G-


Today’s Wiki-est, Amazonian Googlies
Across
15. ___ Major (constellation) : URSA
The constellation called Ursa Major (Latin for “Larger Bear”) is often just called the Big Dipper because of its resemblance to a ladle, or dipper. It also resembles a plow, and that’s what we usually call it back in Ireland, the “plough”.

21. Piquancy : ZEST
Something that is “piquant” is pleasantly sharp in taste, zesty. “Piquant” is the French word for “prickly”.

27. 1959 Spanish-language Top 40 hit : LA BAMBA
“La Bamba” is a Mexican folk song that was recorded by Ritchie Valens in 1958. “La Bamba” appears in the oft-cited list of the 500 Greatest Songs of All Time compiled by “Rolling Stone” magazine, and is the only song in the list not sung in English. The song lent its name to the 1987 biopic about the life of Ritchie Valens, starring Lou Diamond Phillips as Valens.

32. “Beowulf,” e.g. : EPIC
“Beowulf” is an old epic poem from England, although the story is set in Scandinavia. Beowulf fights a battle, defending the Danish King Hrothgar from the ferocious outcast Grendel. Hrothgar had built a great hall for his people in which they could celebrate; singing, dancing and drinking lots of mead. Grendel was angered by the carousing, and attacked the hall, devouring many of the incumbent warriors as they slept. A bit of an extreme reaction to noisy neighbors I’d say …

35. Civil rights grp. : NAACP
The full name of the NAACP, the National Association for the Advancement of Colored People, is remarkable in that it actually still uses the old but offensive term “colored people”. The NAACP was founded in 1909, by three white people: suffragette and journalist Mary White Ovington, wealthy socialist William English Walling, and civil rights activist Henry Moscowitz.

43. One of the Carpenters, in 1970s pop : KAREN
Karen Carpenter was an accomplished drummer, although she only started playing drums in high school, as a member of the school band. After she graduated she started playing jazz with her brother, Richard, and a college friend. Later, she and Richard played with a group called Spectrum, and submitted many demo tapes to recording companies, but all were unsuccessful. Finally, Karen and Richard got a recording contract with A&M Records, and when they had Karen take the lead on their songs, they hit the big time. Sadly, of course, Karen passed away at only 32-years-old, dying from heart failure brought on by anorexia.

44. Gas in advertising signs : NEON
The basic design of neon lighting was first demonstrated at the Paris Motor Show in 1910. Such lighting is made up of glass tubes containing a vacuum into which has been introduced a small amount of neon gas. When a voltage is applied between two electrodes inside the tube, the neon gas “glows”, giving off the familiar light.

48. Animals not to be trusted? : WEASELS
To weasel out of something is to back away from a prior commitment. The association of “weasels” with the concept of not being trusted might have arisen from the behavior in which a weasel sucks out the contents of an egg while leaving the shell virtually intact.

58. Place to get an M.A. or Ph.D. : UNIV
In many countries, including the US, the degree of Doctor of Philosophy (Ph. D.) is the highest academic degree awarded by universities. However, in Ireland and the UK, “doctorates” can also be awarded, a higher recognition. For example, there is a Doctor of Sciences (DSc) and a Doctor of Letters (DLitt).

61. UPS rival : FEDEX
FedEx began operations in 1973, as Federal Express, but now operates very successfully under it’s more catchy, abbreviated name. Headquartered in Memphis, with its “SuperHub” at Memphis International Airport, FedEx is the world’s largest airline in terms of tons of freight flown. And, due to the presence of FedEx, Memphis Airport has the largest-volume cargo operation of any airport worldwide.

63. “Good luck!” … and a hint to 17-, 25-, 39- and 51-Across : BREAK A LEG
There are many, many colorful theories for the origins of the expression “break a leg”, used in the world of theater to mean “good luck”. Regardless of the origin, what is clear is that wishing someone “good luck” is considered to be very bad luck.

68. “The Little Red Hen” response : NOT I
“The Little Red Hen” is an old folk tale, probably from Russia. In the story, the little red hen finds a grain of wheat and asks for help to plant it. “Not I” is the response she gets, repeatedly. She does the work herself, eventually baking bread from the harvested grain. She asks for help in eating the bread, and gets lots of volunteers. But, the hen decides to save the bread for herself and her chicks, seeing as no one would help her plant the wheat in the first place.

70. Indigo and others : DYES
Anil is another name for the indigo plant, as well as the name for the blue indigo dye that is obtained from it. And that blue is relatively close to “navy” blue.

Down
2. “Night” author Wiesel : ELIE
Elie Wiesel is a holocaust survivor, best known for his book “Night” which tells of his experiences in Auschwitz and Buchenwald.

7. Maker of the Rodeo and Trooper : ISUZU
Isuzu is a Japanese auto manufacturer, very successful in the medium and heavy truck market in particular. You’ll be seeing fewer and fewer Isuzu passenger cars on American roads though, as the company exited the US passenger car market in 2008. The Isuzu Rodeo is a pick-up truck made between 1988 and 2002, and sold in the US as the Isuzu Pickup and Chevrolet LUV. “Rodeo” was the model name used back in Japan.

22. The Beatles’ ___ Pepper : SGT
Sgt. Pepper’s Lonely Heart Club Band was the alter-ego of the Beatles, used in the studio album of the same name released in 1967.

26. Actor Morales : ESAI
Esai Morales is best known for his role in the 1987 movie “La Bamba”, which depicted the life of Ritchie Valens and his half-brother Bob Morales (played by Esai Morales).

28. Turkish title : AGHA
Aga, or agha, is a title that was used by both civil and military officials in the Ottoman Empire.

38. Pitchfork-shaped letters : PSIS
The Greek letter psi is the one that looks a bit like a trident or a pitchfork.

49. One way to run : AMOK
The phrase “to run amok” has been around since the 1670s and is derived from the Malay word for “attacking furiously”, “amuk”. The word “amok” was also used as a noun, to describe Malay natives who were “frenzied”. Given Malaya’s troubled history, the natives probably had good reason for that frenzy …

50. Many four-doors : SEDANS
The American “sedan” car, is the equivalent to the British “saloon” car. By definition, a sedan car has two rows of seating, and a separate trunk (boot in the UK), although in some models the engine can be at the rear of the car.

51. Davenports : SOFAS
The name Davenport, when used to mean a sofa, is one of those generic terms that evolved for an item from the name of a prominent manufacturer. The long gone Davenport Company sold a lot of furniture in the midwest and upstate New York, so the term is especially common in that part of the country.

52. Pipsqueak : TWERP
Twerp and pipsqueak are both terms used for someone who is insignificant and contemptible.

53. Actress MacDowell : ANDIE
Andie MacDowell is an American actress who seems to turn up in quite a few British productions set in that part of the world. Most famously she was the love interest in the fabulous film “Four Weddings and a Funeral” starring opposite Hugh Grant. I also enjoyed another of her movies, “Groundhog Day”, a fun tale.

55. Bit of light that’s harmful to the skin : UV RAY
It’s the ultraviolet light that causes skin to burn, but it’s also UV light that contributes to the manufacture of Vitamin D in the skin.

60. Himalayan beast : YETI
A yeti is a beast of legend, also called an abominable snowman. It is a Tibetan term, and the yeti is fabled to live in the Himalayan regions of Nepal and Tibet. Our equivalent legend in North America is that of Bigfoot. The study of beasts whose existence have not yet been substantiated is called cryptozoology.

62. Top-row PC key : ESC
The escape key was originally used to control computer peripherals (a printer maybe). It was a key that allowed the computer operator to stop what the peripheral was doing (like printing, for example). Nowadays the escape key is used for all sorts of other things, especially in gaming programs.