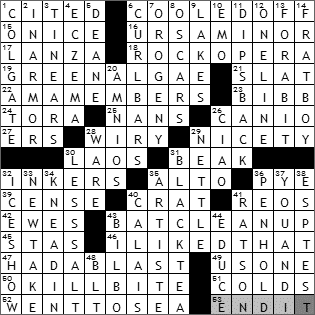 Draco (Latin for “dragon”), and so once Ursa Minor was considered to be the wing of Draco, and hence “Dragon’s Wing”. Quite interesting …
17 LANZA: Mario Lanza

” was the second rock opera by the Who

” being the first, and more famous).
19 GREEN ALAGAE: Protists, like green algae, are simple microorganisms, often with only one cell, or if multicellular, having no specialized tissues.
24 TORA: The pre-determined code word to be used by the Japanese if they managed to achieve surprise in their attack on Pearl Harbor was tiger, or tora in Japanese. This gave the name to the excellent 1970 movie “Tora! Tora! Tora!

is the character in Leoncavallo’s opera “Pagliacci

“, that is famously dressed as the clown.
30 LAOS: Laos

was called the “Land of a Million Elephants” in reference to its centuries-old history as a powerful war machine.
36 PYE: Joe Pye was an Indian healer from New England who used the Eutrochium plants as herbal remedies, giving them the name “Joe Pye weeds

Down
1 COLGATE: The Patriot League was profiled in the John Feinstein book “The Last Amateurs

was a member of the Continental Congress

means “mountain generating” in Greek, and is the name given to all the natural processes that result in the formation of mountains.
8 OSCARS: Walt Disney won 26 Oscars, and also holds the record number of 4 in one year.
10 EMO: Emo originated in Washington D.C. in the 80s, and takes its name from “emotional hardcore”. Not my cup of tea …
31 BLACK TEA: The black tea was compressed into bricks for use as a form of currency, not only in Mongolia, but also Tibet and Siberia.
32 ICE SHOW: “Pairs” refers to the pairs competition in which couples compete. “Eights” refers to the figure eights, as in “figure skating

“, “Song of the Volga Boatmen

are those five cards with shapes on them that are used to test if one has ESP.
40 CALAIS: The Dover Strait is the narrowest part of the English Channel, on which one side sits Dover, and the other Calais.
43 BILBO: Bilbo Baggins is the main character in Tolkien’s

“, and makes an appearances in “The Lord of the Rings