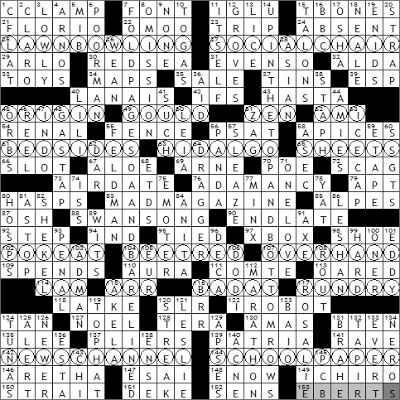 NOTE: The print version of this puzzle originally published in the New York Times  on January 24th is slightly different in the southwest corner (three clues and answers are different).

Here is the “folded” version of the grid, displaying the hidden words.

Completion Time: N/A (watching TV … but slow!)
Theme: MAD FOLDING (emulating the celebrated MAD fold-in feature). When folded as directed by the answers to 7&14-down, the grid reveals a list of items that are commonly folded.
Answers I missed: 2 B-TEN (D-TEN), BRAHE (DRAHE)

” are autobiographical works by Herman Melville

won Emmy’s for directing, acting and writing in “M*A*S*H

“, which was also the film in which Jamie Foxx made his debut.
49 GOULD: Stephen Jay Gould

was an influential writer of popular science.
58 APICES: Apices is the plural of “apex”.
63 HIDALGO: Miguel Hidalgo was a Mexican priest and leader of a peasant’s revolt that developed into the Mexican War of Independence.
69 ARNE: “Rule Brittania!” was a poem by James Thomson, for which Thomas Arne

composed the famous music.
70 POE: “The Oblong Box” is a short story by Edgar Allen Poe

” is a collection of short stories by Isaac Asimov, and perhaps my favorite work of science-fiction.
127 NOEL: “Joyeux Noel” is joyous, or “Merry Christmas” in French.
135 ULEE: Peter Fonda played the title role in “Ulee’s Gold

Down
2 CLARO: A claro is mild cigar made with light-colored tobacco. The name comes from the Spanish for “clear”.
4 ARNOS: Cartoonist Peter Arno‘s real name is Arnoux Peters.
5 MIB: The 1997 blockbuster “Men in Black

“.
16 BBC: The BBC World Service is a radio broadcast service that started of as the British Empire Service in 1932.
18 NEALE: Greasy Neale was head coach of the Philadelphia Eagles from 1941-1950.
19 ENIDS: Enid Bagnold wrote “National Velvet

that were very popular when I was growing up in the British Isles.
40 LILI: Lili Taylor played Valerie Solanas in “I Shot Andy Warhol

“.
55 FELDMAN: Corey Feldman played Teddy Duchamp in “Stand by Me

is known as the Father of the Nation in china, and is uniquely revered in both the mainland of China and Taiwan.
84 ANITA: Anita (played by Rita Mareno in the film) is the girlfriend of Bernardo, the leader of the Jets, in “West Side Story

“.
86 LESHAN: Eda LeShan wrote “When Your Children Drive You Crazy

“, and gave the name to the Akela, the cubmaster in the scouting movement.
117 ROSALIE: Gershwin’s “Rosalie” was made into a movie released in 1937

.
121 LESLIE: Leslie Nielsen is a Canadian actor that plays the zany Sergeant Frank Drebin in “The Naked Gun

lost his nose in a duel, and wore a replacement made of either silver or gold pasted onto his face.
133 EVERT: Chris Evert

also won a total of 18 Grand Slam singles championships.
134 NERO’S: The Circus of Nero was also called the Circus of Caligula, as it was started by Caligula, and finished by Nero.
138 ENSA: The complete motto is “Ense Petit Placidam Sub Libertate Quietem”, and translates as “By the sword we seek peace, but peace only under liberty”.
143 CHI: The Greek letter chi is written as “X”, although the sound is more like a “j”.
145 PCB: Polychlorinated biphenyl …