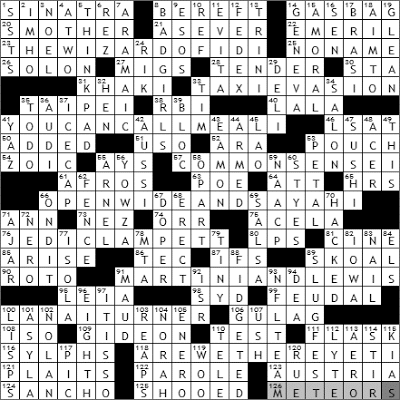 Completion Time: 39m 03s
Theme: Keep an Eye on It! The themed clues are solved by adding an “I” to the first or last words of a common phrase e.g. THE WIZARD OF ID-I
Answers I missed: 2 SOLON (SOLEN), A TWO (ATWE)

came out of retirement with a TV special, and an album, called “Ol’ Blue Eyes is Back

started using his famous, “Bam!” catchphrase in order to keep his crew awake during repeated tapings of his show, and it also stuck.
23 THE WIZARD OF ID-I: “The Wizard of Id

” comic strip was created by Brant Parker and Johnny Hart. Forest Whitaker won many awards for his portrayal of Idi Amin

the excellent film “The Last King of Scotland

was an Athenian Statesman and lawmaker in Ancient Greece. He gave his name to our contemporary word “solon” meaning “a wise lawmaker”.
27 MIGS: Tom Cruise’s character came up against Soviet-built MiGs while flying his F-14 Tomcat

in the movie “Top Gun

“.
35 TAIPEI: Taipei 101 in Taipei, Taiwan, is so-called because it has 101 floors.
38 RBI: In a suicide squeeze, the runner at 3rd heads for home before the pitcher releases the ball, assuming that the hitter will make contact with a bunt. If the batter misses the bunt, the runner has committed “suicide”.
40 LA-LA: “La-La (Means I Love You)

” is maybe the best known song from the Delfonics

” is a song by Paul Simon

” album.
46 LSAT: The Law School Admission Test has been around since 1948.
51 USO: The United Service Organization

was founded in 1941 at the request of FDR, “to handle the on-leave recreation of the men in the armed forces”. A USO tour is a tour by a troupe of entertainers, many celebrities, to troop locations, often including combat zones.
52 ARA: Ara Parseghian

” is a short story By Edgar Allen Poe

” is hilarious movie starring Nick Nolte and Eddie Murphy.
71 ANN: There was no such woman as “Ann Taylor“. The name was chosen because “Ann” was considered to be “very New England” back in 1954 when the stores first opened, and “Taylor” suggested that clothes were carefully “tailored”.
73 NEZ: In French, le nez (the nose) is just below les yeux (the eyes).
74 ORR: Orr has no other name, just “Orr”, in Joseph Heller’s “Catch 22

“.
75 ACELA: The Acela Express is the fasted train routinely running in the US, getting up to 150 mph at times.  The brand name “Acela” was created to evoke “acceleration” and “excellence”.
76 JED-I CLAMPETT: Jed Clampett was played by Buddy Ebsen in “The Beverly Hillbillies

“.
81 CINE: Francois Truffaut was a celebrated French filmmaker, so one might see his movies in le cine, short for le cinema.
89 SKOAL: Skoal is a Swedish toast.
91 MARTIN-I AND LEWIS: The reference is to Dean Martin and Jerry Lewis. And Ramsey Lewis

is a jazz composer and pianist.
95 LEIA: Princess Leia had those bigs buns on each side of her head in “Star Wars

“.
106 GULAG: Aleksandr Solzenhitsyn, having spent many years in a Gulag labor camp, wrote his famous “The Gulag Archipelago

“.
109 GIDEON: Gideon, Judge of Israel, did indeed give the name to Gideons International, the group that deposits bibles in hotel rooms around the world.
116 SYLPHS: A sylph, or a sylphid, is a mythological creature, an invisible and wispy being of the air.
123 AUSTRIA: Both the 1964 and 1976 Winter Olympics were held in Innsbruck.
124 SANCHO: Sancho Panza is Don Quixote

Down
2 IMHO: In My Humble Opinion … that’s what we bloggers say all the time …
3 NOEL: A noel is another word for a Christmas carol, such as “The Seven Joys of Mary”.
4 A TWO: Lawrence Welk

used to count into his performances with “A one and a two …”. He even had a licence plate “A1ANA2”.
5 THINKPAD: IBM introduced the ThinkPad

in 1992, and the brand is still sold today, although no longer by IBM. They sold off their personal computer division in 2005.
6 REZ: Short for the “reservation”.
7 ARAMAIC: “The Passion of the Christ

” has dialogue in Aramaic, but also Latin and Hebrew. It is the biggest selling movie ever with non-English dialogue.
8 BAD GIRLS: “Bad Girls

” was the hit song on the album of the same name

” is from the Andrew Lloyd-Weber musical “Evita

“.
13 TRINI: A Trini is from the island of Trinidad off the coast of Venezuela.
14 GENEVA: The Palace of Nations was built as the home of the League of Nations, and is now the home of the United Nations Office at Geneva.
15 AMORAL: “The Stranger

‘s first, and probably most famous novel.
17 BRASI: Luca Brasi was played by Lenny Montana in the 1972 film of “The Godfather

” and “The Carol Burnett Show

“.
41 YAZ: Yaz was the nickname for Carl Yastrzemski

, who played his whole career with the Boston Red Sox.
42 AUSSI: The French word for “too, also”.
43 EAMON: My favorite film giving insight into Eamon de Valera

, for my money the most reliable machine at the best price.
66 ON DIT: An on dit is bit of gossip, derived from the French on dit, meaning “one says”.
67 DOPER: A doper is an athlete who subjects himself to blood doping.
72 NERO: In the 1967 film “Camelot

“, Sir Lancelot was played by Franco Nero, the Italian actor who met Vanessa Redgrave on the set, his future wife.
82 IOWA: “The Bridges of Madison County” is a novel

by Robert James Waller, and a movie

“.
100 LISPS: Some Spanish dialects do not use certain sounds or sound, and create the impression that the speaker has a slight lisp, this is incorrectly termed a “Castilian Lisp“.
102: NOLAN: Francie Nolan is the main character in Betty Smith’s novel “A Tree Grows in Brooklyn

“, a story that is accepted as being largely auto-biographical.
104 NORAH: Norah Jones

can be noted as one of the very few contemporary performers that make it onto my mp3 player!
120 RUE: “The Murders in the Rue Morgue

” is a short story by Edgar Allen Poe

, and is recognized as the first “detective story” ever written.