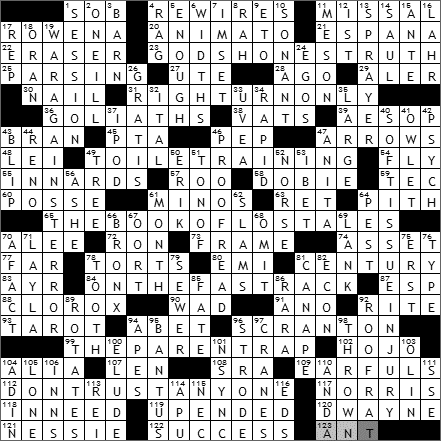 TODAY’S GOOGLIES …
Across
17 ROWENA: In the famous novel by Sir Walter Scott, “Ivanhoe”

marries the Lady Rowena.
20 ANIMATO: As one might expect, the Italian word “animato” is used in a musical score to indicate that one should play “spiritedly”.
21 ESPANO: The patron saint of Spain (espana) is St. James the apostle, or Santiago in Spanish.
25 PARSING: Parsing a sentence is breaking it down into its component parts of speech (verbs, nouns etc.)
27 UTE: Chief Ouray led the Ute tribe in latter half of the 19th century.
28 AGO: Each “Star Wars

“The Fox and the Grapes”, the fox cannot reach the grapes in the tree, so he claims not to want them as “the grapes are sour anyway!”
54 FLY: Pitcher plants are carnivorous, and trap flies in a cavity full of liquid which drowns and then dissolves them.
58 DOBIE: “The Many Loves of Dobie Gillis

” starred Dwayne Hickman in the title role.
59 TEC: Sam Spade is the private detective (“tec”) in “The Maltese Falcon

“.
61 MINOS: In Greek mythology, Ariadne was the daughter of King Minos of Crete, and helped Theseus defeat the minotaur.
65 THE BOOK OF LOST ALES: “The Book of Lost Tales

” was written by J. R. R. Tolkien, and in it he starts to outline the history of Middle Earth, the setting for “The Hobbit

” and “The Lord of the Rings” trilogy

.
104 ALIA: Inter alia means “among other things” in Latin.
107 LEN: I used to live just down the road from Len Deighton in Ireland, the author of “The IPCRESS File

” was one of the first films in which Chuck Norris played the lead.

Down
2: O’NEILL: Eugene O’Neill won a Pulitzer for his play “Anna Christie

“, Charlotte is a barn spider.
10 SONANT: A sonant is a voiced sound.
11 MESON: A meson is a sub-atomic particle, made up of one quark and one antiquark.
12 IST: A cruciverbalist is crossword enthusiast, or more particularly a crossword constructor.
14 SAUL: Handel’s oratorio “Saul

” tells the story of Saul, the first king of Israel, and his successor David.
16 LAHR: Bert Lahr played the cowardly lion in the film version of “The Wizard of Oz

“.
18 ORAN: Oran is on Algeria’s Mediterranean coast.
33 UVEA: The uvea is the middle of the three layers that make up the eyeball.
37 IPOD: The iPod Touch

is a model introduced by Apple in 2007.
47 ANITA: In the film version of “West Side Story

“, Anita was played by Rita Moreno.
49 TREE: I went to the 3D version of “Avatar” the other day … the way to see the move!
50 ERIK: Erik Satie was a French composer, most famous for his beautiful composition, the three “Gymnopedies

“
61 MONTH: Shevat and Sivan are months in the Hebrew calendar.
62 SLAMS: Poetry slams originated in Chicago in 1984.
67 OORT: The Oort Cloud is supposedly a spherical cloud of comets that lies about a light-year from the sun.
71 LAYLA: “Layla

” was recorded by Eric Clapton when he was with Derek and the Dominoes.
86 RARA: A rara avis is anything that is very rare, from the Latin for “rare bird”.
101 ‘N SYNC: “This I Promise You

“, Ken Olin moved behind the camera and is now a producer and director.
106 INNS: Imarets are inns in Turkey.
114 APU: In “The Simpsons