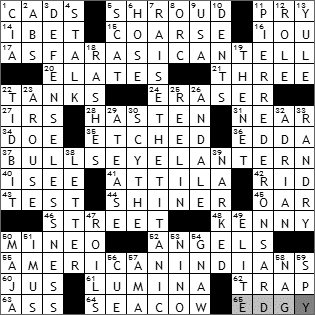 were written down in the 13th century in Iceland, and are the sources of much of Norse mythology in Iceland.
37 BULL’S-EYE LANTERN: A bull’s-eye lantern is that oil lantern carried by police constables (and Sherlock Holmes) in Victorian London, with a lit wick inside a tin case with a piece of refractive glass in the front.
41 ATTILA: The Roman general Flavius Aetilus, in league with the Visigoths, defeated Attila the Hun at the Battle of Chalons in the year 451.
42 RID: To disembarrass is to free something from embarrassment, to relieve or to rid.
43 TEST: Not all cricket matches are test matches, just the internationals.
46 STREET: Della Street was Perry Mason’s very capable secretary in the Erle Stanley Gardner novels

.
48 KENNY: Kenny McCormick was always dying in each episode of “South Park”

.
50 MINEO: Sal Mineo earned the nickname the “Switchblade Kid” from playing the bad guy in the movie “Crime in the Streets” from 1956
62 TRAP: A deadfall trap is a simple animal trap in which a heavy log or rock falls on the victim once the trap is triggered.
Down
1 CIA: Valerie Plame Wilson discusses her outing as a CIA officer in her book “Fair Game”

was made into a movie starring Jason Robards

.
11 PIERRE DE RONSARD: Pierre de Ronsard was known as the “prince of poets”, and was a favorite in the court of King Charles IX of France.
13 YULE: The Yule Ball is held on Christmas Eve every year there is a Triwizard Tournament at Hogwarts (of Harry Potter