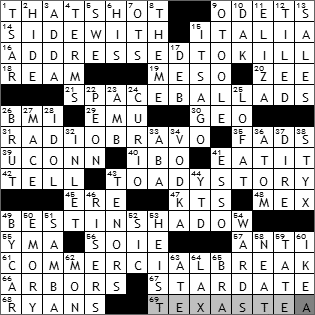 started to coin the phrase “that’s hot” in 2005, playing on its “opposite” meaning, “that’s cool”. And she has filed for copyright protection of the phrase.
9 ODETS: Clifford Odets wrote “The Country Girl

” in 1950, and it was made into a movie starring Bing Crosby and Grace Kelly.
15 ITALIA: Translated into English from Italian, “Naples

” is set in a sales office of Dunder Mifflin

, a paper company. If you haven’t seen the original UK version

, starring Ricky Gervais, you really should check it out.
19 MESO: The Mesozoic

was born in the Ibo region in the south of the country.
45 ‘ERE: Eliza, in My Fair Lady

was a Peruvian soprano, with a notable vocal range of five octaves.
68 RYAN’S: “Ryan’s Hope” was apparently a soap about an Irish-American family living in New York City. I can only imagine …

Down
1 TSAR: In Imperial Russia, a ukase was a proclamation issued by the government or the tsar.
9 O’TOOLE: “Lord Jim

” is a novel by Joseph Conrad

, turned into a movie in 1965 starring Peter O’Toole as Lord Jim

.
11 ELIZA: Eliza was Henry Higgins’s pupil in “My Fair Lady” (and the original play “Pygmalion

was the first winner of “American Idol

“.
34 VODKA: A Salty Dog contains vodka (or gin) and grapefruit juice served in a glass with a salted rim.
38 STYX: Styx

are an american band with hits in the 70s and 80s.
43 TENORS: The Three Tenors

(RIP).
46 RISERS: A riser is a, usually portable, elevated part of a stage.
50 EMORY: Desmond Tutu

is still here from yesterday’s puzzle. He was appointed visiting professor at Emory University

(as opposed to the original Tate Gallery

) that lies on the banks of the Thames in London. It’s a beautiful building.