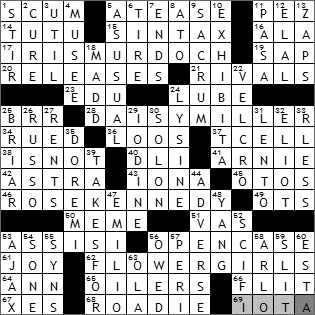 TODAY’S GOOGLIES (all links go to Amazon.com) …
Across
11 PEZ: PEZ

is an Austrian brand name for a particular candy sold in a mechanical dispenser. The name PEZ comes from the first, middle and last letters of P-feff-E-rmin-z, the German word for “peppermint”. Quite interesting …
14 TUTU: Archbishop Desmond Tutu

was an Irish author, famous for her novels “Under the Net

” is a novella published by Henry James

in 1878.
37 T CELL: T cells are a group of white blood cells that are an essential component of the body’s immune system

.
41 ARNIE: Arnie Morton founded Morton Steakhouses, after having set up a chain of Playboy Clubs

!
42 ASTRA: “Astra”, the Latin for “stars”, as in “Ad Astra”, the motto of my alma mater, University College Dublin.
43 IONA: Iona College is a Roman Catholic college run by the Christian Brothers, in New Rochelle, New York.
45 OTOS: The Otoe-Missouria Tribe are based in Red Rock, Oklahoma.
46 ROSE KENNEDY: Rose Fitzgerald Kennedy

was the mother of President John F. Kennedy

, and eight other children.
50 MEME: A “meme” (short for “mineme”) is a cultural practice or idea that is passed on verbally or by repetition from one person to another.
64 ANN: Cape Ann

is 30 miles north of Boston, and is the northernmost edge of Massachusetts Bay.

Down
4 MUSEE: The Musee d’Orsay

is one of the premier museums in Paris, and holds the world’s largest collection of impressionist art.
9 SACRUM: As children we have five vertebrae at the base of our spine that will have fused into one bone called the sacrum by the time we hit 26-years-old.
26 RUSSO: The lovely Rene Russo

.
31 LENTO: A lento passage in a piece of music has a slow tempo.
32 ELIOT: “Silas Marner: The Weaver of Raveloe

was a phonograph in which the turntable and horn could be hidden away in a wooden cabinet.