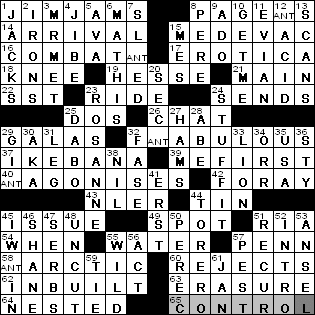 1 JIMJAMS: New to me, the jimjams are a nervous feeling, the jitters.
16 COMBATANT: I think the idea is that one might encounter an enemy combatant.
18 KNEE: “I come from Alabama, with my banjo on my knee”.
19 HESSE: “The Glass Bead Game

” was written by German Swiss author Hermann Hesse.
22 SST: The SuperSonic Transports, like Concorde, are all grounded now.
23 RIDE: The Teacups (known as the “Mad Tea Party” at Disneyland), the carnival ride most likely to make me sick!
32 FANTABULOUS: A fantabulous, slang blend of fantastic and fabulous.
37 IKEBANA: I can  never remember that ikebana

is the Japanese art of flower arrangement.
43 NLER: The Diamondbacks (D-Backs) and Cardinals (Cards) are National League Baseball teams (NLers)
44 TIN: When I was growing up in Ireland, I was forever invading the biscuit tin, or as we call it on this side of the pond, the cookie jar.
45 ISSUE: “O

” are celebrated magazines (that I would never read!).
49 SPOT: The reference is to the series of children’s illustrated books called “Where’s Waldo

” in Britain where they originate.
57 PENN: The University of Pennsylvania (Penn) is an Ivy League school in Philadelphia.

Down
1 JACKS: Jacks are superior to 10s in a deck of cards.
2 IRONS: Fetters are chains for the feet or ankles, leg irons.
3 MR MET: Mr. Met is the mascot of the New York Mets, that now play at Citi Field.
5 AVA: Ava Gardner starred with Clark Gable in the African Safari movie “Mogambo

“.
8 PERE: Alexandre Dumas, pere (father) was the famed writer of “The Three Musketeers

” and “The Count of Monte Cristo

“. Alexandre Dumas, fils (son) was also a noted writer.
15 MES: Mes amis … (My friends …)
20 SECANT: The secant (sec, for short) is the ratio of the hyptenuse of a triangle to its adjacent side, and is the reciprocal of the cosine, as you all remember from school, no doubt.
23 ROSANNE: Rosanne Cash

is the eldest daughter of Johnny Cash, a successful singer in her own right.
25 D’ABO: Olivia d’Abo is a British actress, who apparently plays baddie Nicole Wallace on “Law & Order: Criminal Intent

“.
27 HAMS: Soupy Sales and the like, comic actors, might be described as “hams”, performers who exaggerate their characters.
28 ABE: Shinzo Abe was the youngest prime-minister in post WWII Japan.
34 ORR: Bob Orr is the Justice and Homeland Security correspondent for CBS News.
44 TORERO: In English we might call a torero a toreador, a term not actually used in Spain.
46 SHANE: The reference is to the classic 1953 movie (and novel

” starring Alan Ladd (Shane) and Brandon De Wilde (Joey Starrett). De Wilde died tragically at 30 years of age, in a motorcycle accident.
UPDATE: Someone has pointed out the Brandon de Wilde was driving a VW camper van when he died. My error!
50 PEREC: “Life: a User’s Manual

” is Georges Perec’s most famous novel.