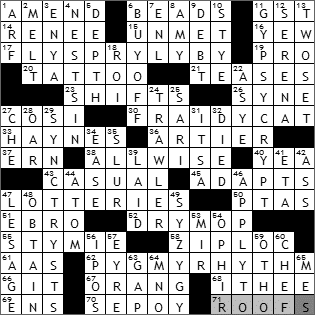 “, a bio-pic about Bob Dylan.
51 EBRO: The Ebro is the most voluminous river in Spain.
70 SEPOY: A sepoy was a native Indian soldier that fought for the British Army, and also the Portuguese.
Down
3 ENYA: Like many Irishmen, I’m not a huge fan of Enya’s music. The album “Amarantine

” had two tracks released as singles, “Amarantine” and “It’s in the Rain”.
8 AMY: Amy Winehouse is an English singer that has quite a reputation as a “wild woman”.
12 SERENA: I just saw Serena Williams interviewed promoting her book “On the Line

” is the biopic directed by Steven Soderbergh, about the life of Che Guevara.
47 LASAGE: “Gil Blas

” is considered to be a masterpiece, written by French author, Alain-Rene Lesage.
49 SYZYGY: Three or more celestial bodies (in the same gravitational system) are said to be “syzygial” when they are aligned.
54 OPHIR: King Solomon was supposed to have received a precious cargo from Ophir every three years.
57 EYRE: Rochester was famously played by Orson Welles in the 1944 movie adaptation of “Jane Eyre”

.
59 OTHO: Otho was Emperor of Rome for only two months, before he committed suicide.
60 CHEF: The reference is to “Top Chef