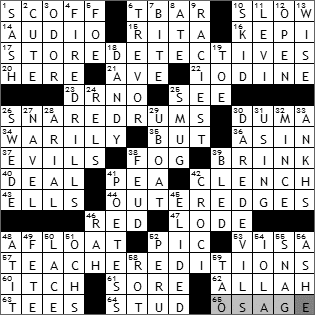 Completion Time: 11m 27s
Theme: You can SEE “RED” in the middle of the themed answers.
Answers I  missed: None

.
33 ANKHS: Ankhs are crosses in the shape of an Egyptian hieroglyph.
41 POETESS: Anne Bradstreet

was the first woman to be published in Colonial America.
51 OCHS: Phil Ochs

was an American protest singer, active in the days of the Vietnam War.
54 IOLA: Iola, KS is named after Iola Colburn, the wife of one of the city’s founding fathers.
59 TAO: The Tao Te Ching

is a classical Chinese text, fundamental to the philosophy of Taoism.