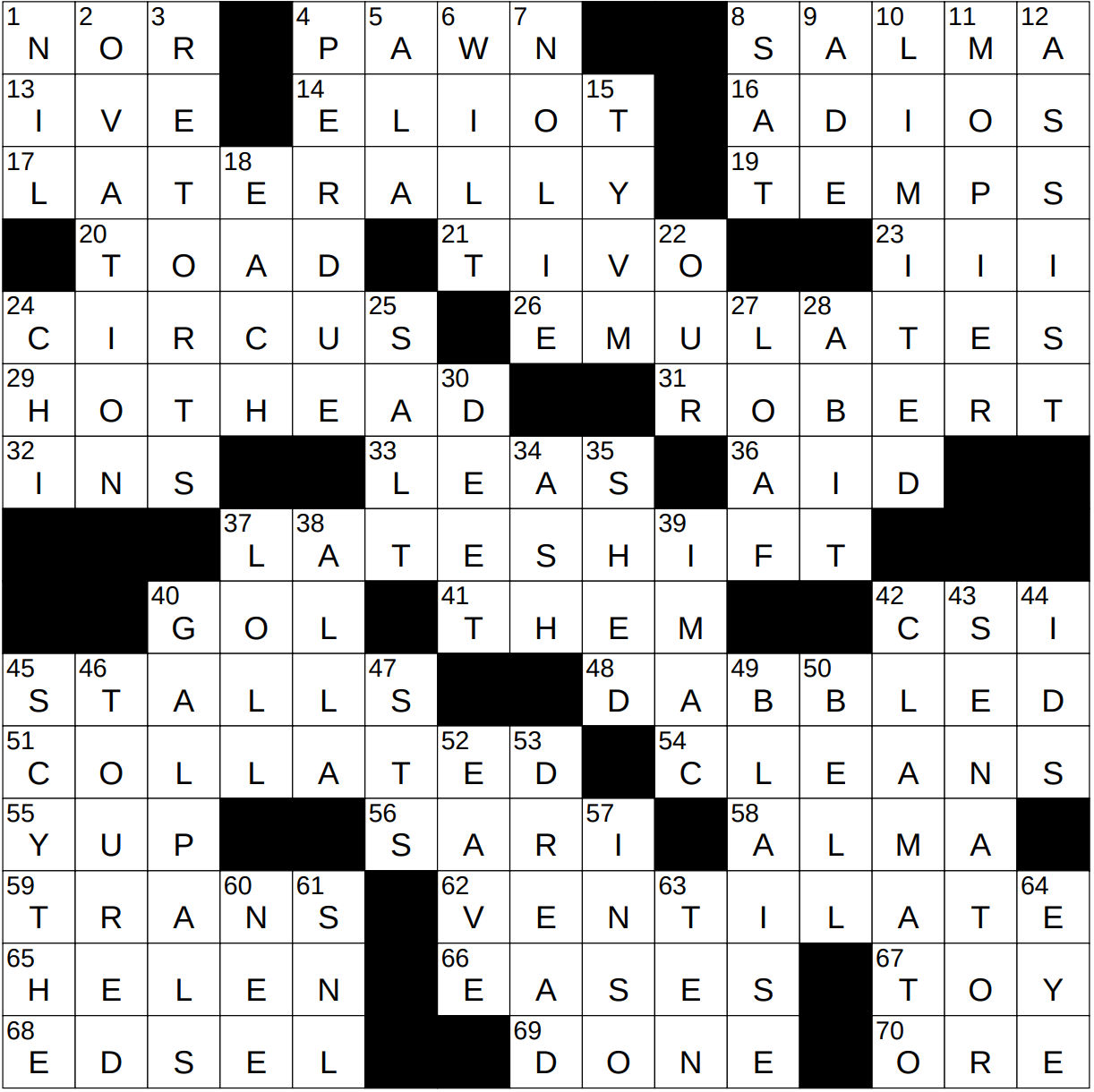 Constructed by: Claire Rimkus & Rachel Fabi
Edited by: Will Shortz

Themed answers come in pairs, side-by-side in rows. The letter string “LATE” is SHIFTED from one element of each pair to the other:

A nor’easter is a storm that blows from the northeast.

4 Element of an English Opening in chess : PAWN

“Romola” is a novel by George Eliot that was first published in serial form in 1862-63. The story takes place in Florence during the Italian Renaissance, and has many references to actual historical events and notable figures of the time. This setting for “Romola” sets it apart from Eliot’s other novels, which take place in 19th-century England.

The “warts” on the skin of a toad have no relation to the viral infection that can occur on human skin. A toad’s warts are colored bumps that are believed to help the animal blend more effectively into its environment.

The Circus Maximus was an ancient stadium used for chariot racing in Rome. It was the first such stadium built by the Romans, and was the largest ever to be built in the whole of the Roman Empire. The Circus Maximus was over 2,000 feet long and just under 400 feet wide, and could house about 15,000 spectators. There is very little of the original structure remaining and the site is now used as a major park. It was the Circus Maximus and similar “circa” that gave rise to our contemporary word “circus” describing an arena used by clowns, acrobats, etc.

31 King at the start of “Game of Thrones” : ROBERT

37 Overnight work assignment … or a hint to understanding four rows of answers in this puzzle : LATE SHIFT

In Spanish, supporters might shout “gol!” (goal!) at the “Copa Mundial” (World Cup) of soccer.

Edsel Ford was the only child of automobile manufacturing pioneer Henry Ford. Edsel became president of Ford Motors, as Henry’s sole heir, and served in that capacity from 1919 until his death in 1943. Henry’s name is very much associated with the Model T, the Tin Lizzie. Edsel was the man behind the subsequent development of the more fashionable Model A. However, despite Edsel’s many successes, his name is inextricably linked with the highly unsuccessful Edsel line of cars.

The word “nothing” translates to “nada” in Spanish, and to “rien” in French.

Thank you very much (TYVM)

The letter chi is the 22nd letter in the Greek alphabet, and the one that looks like our Roman letter X.

Detritus is loose material that results from the process of erosion. The usage of the term has evolved to describe any accumulated material or debris. “Detritus” is Latin for “a wearing away”.

Clamato is a drink made by Mott’s that is a blend of tomato juice and clam broth flavored with spices.The drink is intended to be reminiscent of Manhattan-style clam chowder.

45 Cutter with a curve : SCYTHE

I guess there are several designs of scythe, e.g. English scythes and Austrian scythes. The two main components of any scythe are the blade and the handle known as a snaith.