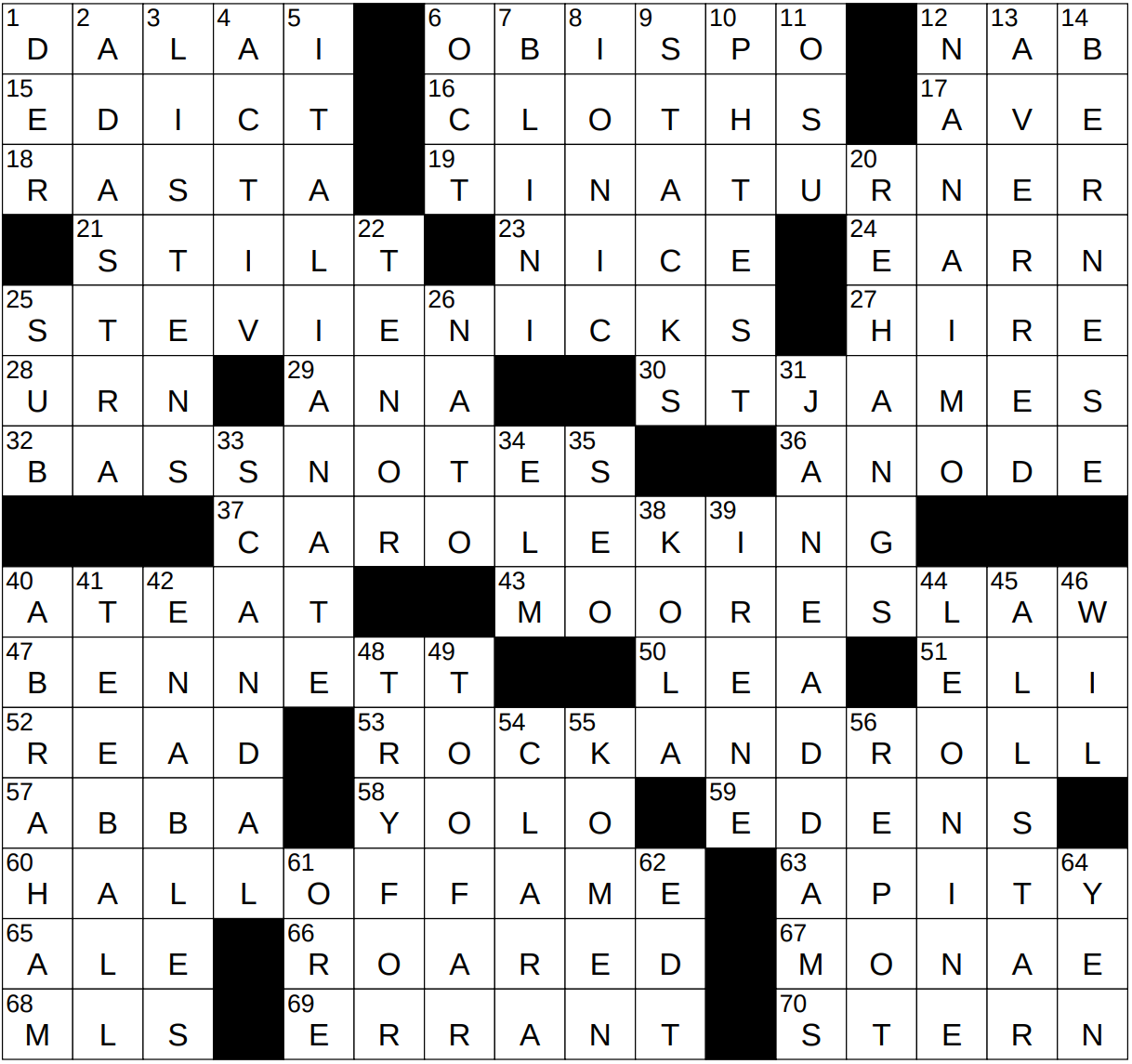 Constructed by: Josh Goodman
Edited by: Will Shortz

Themed answers are the names of three women inducted into the Rock and Roll Hall of Fame twice:

Singer Stevie Nicks came to fame as the lead singer of Fleetwood Mac. She has a very distinctive voice, heard at its best (I think) on the famous 1977 album “Rumours”.

30 “Place” by Pennsylvania Railroad on a Monopoly board : ST JAMES

There are three “Place” names on a Monopoly board. Those would be St. Charles Place, St. James Place and Park Place.

Not only is Carole King a highly successful recording artist and performer, she is recognized by many as perhaps the greatest American female songwriter. Many of her earlier hits were co-written with her first husband Gerry Goffin. King’s life and career is celebrated in the marvelous stage show “Beautiful: The Carole King Musical”, which I highly recommend.

57 Pop group whose name is also a rhyme scheme : ABBA

58 Acronym that might be shouted before a rash act : YOLO!

Someone described as errant is roving around, especially in search of adventure, as in “knight-errant”.The term “errant” has come to mean “behaving wrongly” and “straying outside the bounds”.

The Canadian Thanksgiving holiday predates the related celebration in the US. The first Canadian Thanksgiving was held in 1578 by an explorer from England named Martin Frobisher. Frobisher was giving thanks for his safe arrival in the New World, and made the observance in the month of October as this was a tradition in England. All this happened 43 years before the Pilgrims landed in Plymouth, Massachusetts.

12 Vancouver Island city for which a chocolate treat is named : NANAIMO

Vancouver Island in British Columbia is the largest island on the west coast of North and South America. Most of the inhabitants of the island live in the city of Victoria, which is the province’s capital. Vancouver Island is named for British naval captain George Vancouver who explored the area in the 1790s.

31 Social worker who was the first American woman to win the Nobel Peace Prize : JANE ADDAMS

Jane Addams was a suffragist and social worker from Cedarville Illinois. Her prominence was such that Addams nominated Theodore Roosevelt for the US Presidency at the Progressive Party’s convention in 1912. In 1931, she became the first American woman to win the Nobel Peace Prize.

33 Skeleton that’s no longer in the closet? : SCANDAL

Eirene (also “Irene”) was the Greek goddess of peace, with “eirene” being the Greek word for “peace”. The Roman equivalent to Eirene was the goddess Pax.

40 Isaac’s father, in the Bible : ABRAHAM

According to the Bible, Abraham’s son Isaac was born to Abraham’s wife Sarah when she was beyond her childbearing years and when Abraham was 100 years old. Isaac himself lived until he was 180 years old. When Isaac was just a youth, Abraham was tested by Yahweh (God) and told to build an altar on which he was to sacrifice his only son. At the last minute, an angel appeared and stopped Abraham, telling him to sacrifice a ram instead.

Although there seems to be some dispute about who invented tee-ball, the game did emerge in the 1950s.

Wil Wheaton is the actor who grew up playing Ensign Wesley Crusher on the best of the “Star Trek” TV series, “Star Trek: The Next Generation”. In recent years Wheaton has become a de facto spokesman for the so-called “geek” or “nerd” community via a blog that he writes called “Wil Wheaton Dot Net”. He has been playing Dungeons & Dragons for years, and is also someone you’ll see at celebrity poker games on TV. Wheaton appeared regularly on “The Big Bang Theory” during its original run, playing himself.

Clara Schumann was a famous concert pianist, and the wife of composer Robert Schumann. Clara is known not only for her talent on the piano, but also for premiering works by Johannes Brahms, who was a dear friend of the Schumanns.

Pittsburgh was the world capital of steel production for many years, largely due to the surrounding geography. The area around the city had large deposits of iron, as well as ample forests that provided the charcoal used in smelting. As the supply of wood diminished, local supplies of coal fueled the blast furnaces. Entrepreneurs took full advantage of the local conditions. Henry Bessemer developed the Bessemer process that produced steel, and soon the area’s iron industry converted to steel production. And the demand for steel was high, as the nation started to build a huge railroad network.