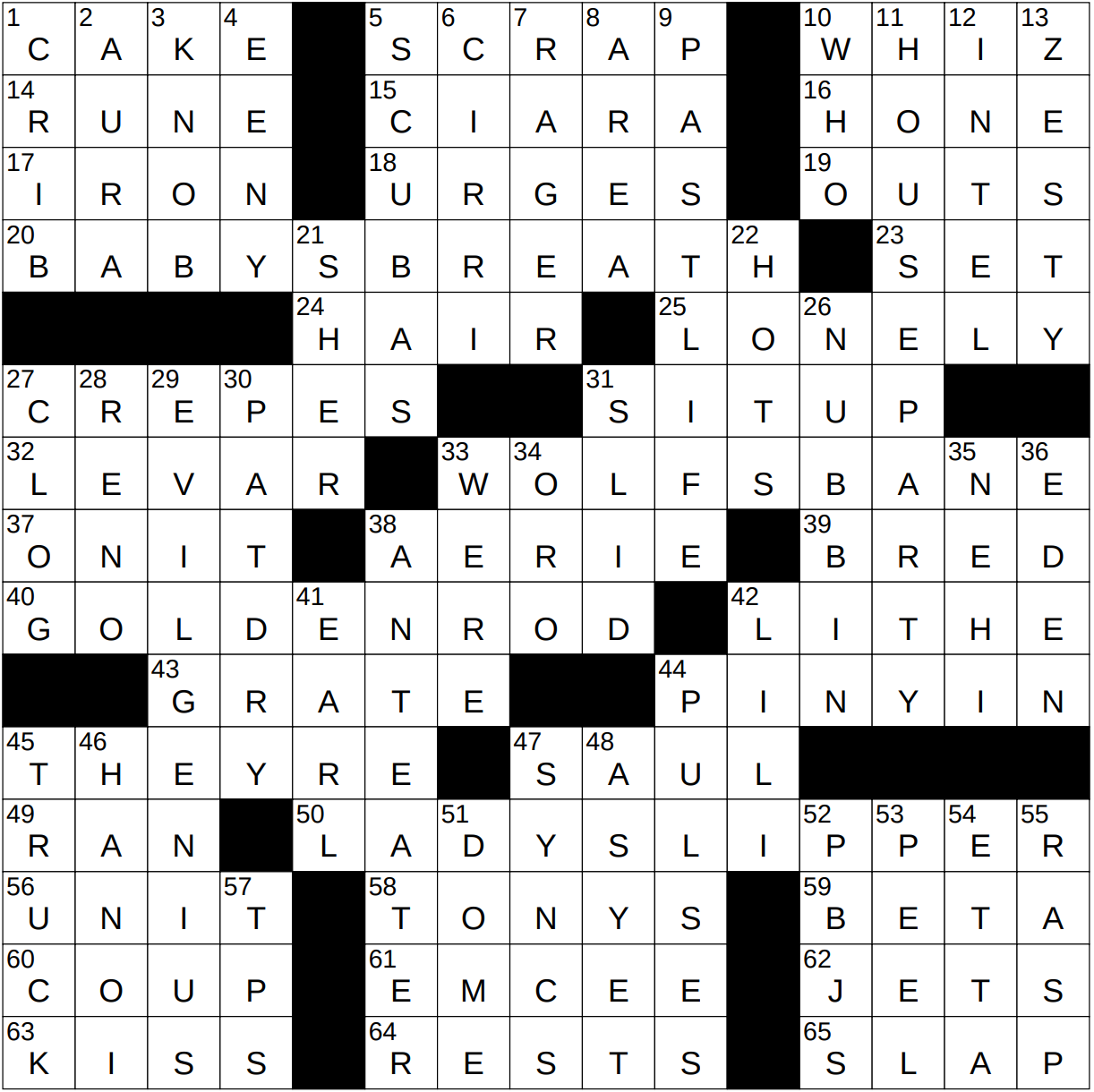 Constructed by: Julietta Gervase
Edited by: Will Shortz

Themed answers are the names of plants, reinterpreted:

The Vikings were a Germanic people from northern Europe who were noted as great seafarers. Key to the success of the Vikings was the design of their famous “longships”. Made from wood, the longship was long and narrow with a shallow hull, It was also light, so that the crew would actually carry it small distances over land and around obstacles. Longships were designed to be propelled by both sail and oars.

Ciara is a singer-songwriter from Austin, Texas. She used to date rapper Bow Wow, but married Seattle Seahawks quarterback Russell Wilson in 2016.

19 Ways to escape a dilemma : OUTS

A lemma is a helping theorem, a subsidiary proposition that helps prove some other proposition. A problem offering two equally acceptable (or unacceptable) possibilities might be described as a “double lemma”, and hence our term “dilemma”. To be on the horns of a dilemma is to be faced with two equally unattractive choices. The suggestion is that one is faced with a “horned” argument, meaning that if you avoid the horn of one choice, you will get impaled on the other.

An aerie (sometimes “eyrie”) is an eagle’s nest, and a young eagle is an eaglet.The term “aerie” can also more generally describe any bird’s nest that is located on a cliff or a mountaintop.

61 One running the show : EMCEE

65 Haphazardly assemble, with “together” : SLAP …

Our word “hap” means chance or fortune. It turns up combined in words like “haphazard” and even “happen”. “To happen” originally meant “to occur by hap, by chance”.

A crib is plagiarism. It is most commonly the copying of an answer in an examination.

As a scuba diver descends into the water, the water pressure on the outside of the eardrum increases, whereas the pressure on the inside of the ear remains constant. This difference in pressure can cause the eardrum to distend, creating pain. A diver avoids the problem by holding the nose and gently blowing air through his or her eustachian tubes, equalizing the pressure inside and outside the eardrum. A similar process operates as the diver ascends, although it is the higher pressure in the middle ear that expels excess air through the eustachian tube into the mouth cavity. If the eustachian tube is blocked, perhaps because of an ear infection, then the persistent pressure difference can result in an excruciating earache after a dive.

In Spanish, “oro” (gold) is a “metal precioso” (precious metal).

38 Mammal with a two-foot-long tongue : ANTEATER

Meats placed between slices of bread was first called a sandwich in the 18th century, named after the Fourth Earl of Sandwich. The earl was fond of eating “sandwiches” while playing cards at his club.

The Ho Chi Minh Mausoleum is a huge memorial to the former Vietnamese leader that is located at the center of Ba Dinh Square in Hanoi. The mausoleum’s design was inspired by Lenin’s Tomb in Red Square in Moscow. Ho Chi Minh’s embalmed body is on display in a central hall in a glass case and visitors file past it every day to pay their respects.

54 James in both the Blues and Rock & Roll Halls of Fame : ETTA