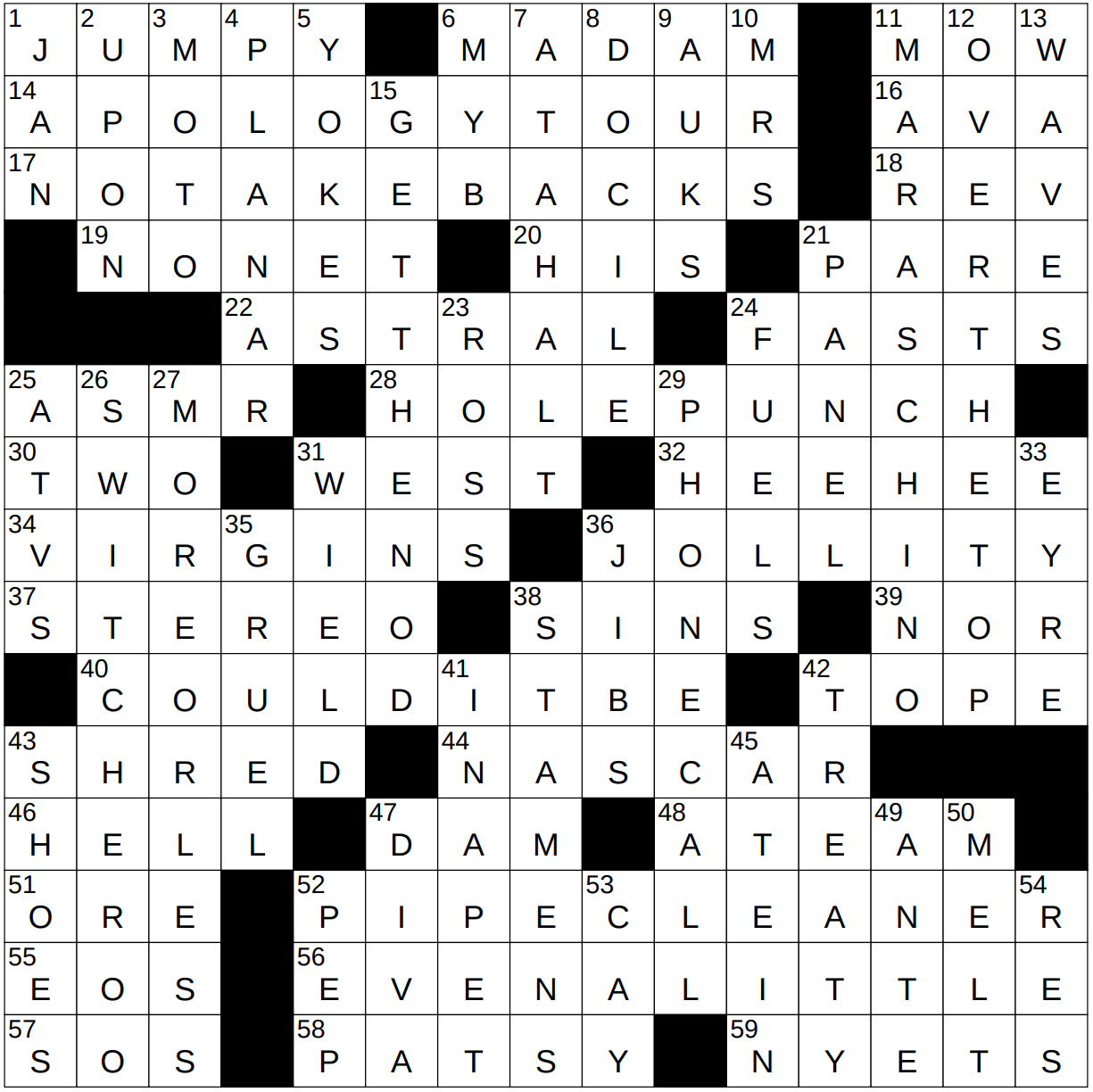 22 Word with plane or projection : ASTRAL

An astral projection is an out-of-body experience. It is often associated with incidents of near-death and describes the phenomenon of the astral body leaving the physical body and traveling around the astral plane.

25 Brain-tingly feeling that may come from hearing whispering or crinkling, in brief : ASMR

A nor’easter is a storm that blows from the northeast.

To tope is to drink alcohol excessively and habitually.

The acronym “NASCAR” stands for the National Association for Stock Car Auto Racing. The association is actually a privately held company that was founded in 1948 and is headquartered in Daytona Beach, Florida. NASCAR is very, very popular and commands the second-largest television audience of any professional sport in America, second only to football.

The Talladega Superspeedway is the longest oval on the NASCAR circuit with a length of 2.66 miles. It also has seating for a whopping 175,000 spectators. The track opened in 1969, built on an abandoned airfield north of the city of Talladega, Alabama. The circuit is renowned for its supposed Talladega Jinx, which is said to have caused a number of accidents and incidents over the years. There has been a relatively high number of fatalities and crashes, including the death of driver Larry Smith in what was apparently a minor wreck, and the death of driver Davey Allison in a helicopter crash in the raceway’s infield. In another strange occurrence, driver Bobby Isaac left his car on the 90th lap of a race as he claims he heard voices that told him to park and get out of his vehicle.

Malachite is a mineral composed of copper carbonate hydroxide. Samples of the mineral contain opaque green bands. The name “malachite” ultimately derives from the Greek “molochitis lithos” meaning “mallow-green stone”. This is a reference to green leaves of the mallow plant, also known as “malva”. Paradoxically, it is the French name of the malva plant that gives our word “mauve”, referring to the color of the flowers.

58 Cline who was the first solo female artist elected to the Country Music Hall of Fame : PATSY

Mr. Potato Head is an enduring and popular toy that has been around since its invention by George Lerner in 1949. In its original form, the toy was a collection of eyes, ears, and other facial features, that were designed to be stuck into a real potato. Mr. Potato Head also has the distinction of being the first toy ever to be advertised on television.

23 Actress Katharine of “The Graduate” : ROSS

Actress Katharine Ross is best known for two major roles, playing Elaine Robinson in “The Graduate” and Etta Place in “Butch Cassidy and the Sundance Kid”. Ross is married to the actor Sam Elliott. Although the couple both appeared in “Butch Cassidy …” , in different scenes, they didn’t actually meet. They didn’t start dating until 1978, almost ten years later.

When Mike Nichols was making the 1967 film “The Graduate” he apparently became obsessed with the music of Simon and Garfunkel, who were just coming into the limelight. Nichols made a deal with Paul Simon to write three songs that he could use on the soundtrack of his new movie. Simon and Garfunkel were touring constantly around that time, so Nichols had to badger Simon to hold up his end of the bargain. When Nichols was ready to lay down the film’s soundtrack there was only one commissioned song available, so Nichols had to basically beg Paul Simon for anything. Simon mentioned that he was finishing up one new song, but it wasn’t written for the film. It was more a celebration of former times, with lyrics about baseball great Joe DiMaggio and former First Lady, Mrs. Roosevelt. Nichols informed Simon that the song was no longer about Mrs. Roosevelt, and instead was about Mrs. Robinson …

49 Alternative to a blind, in poker : ANTE