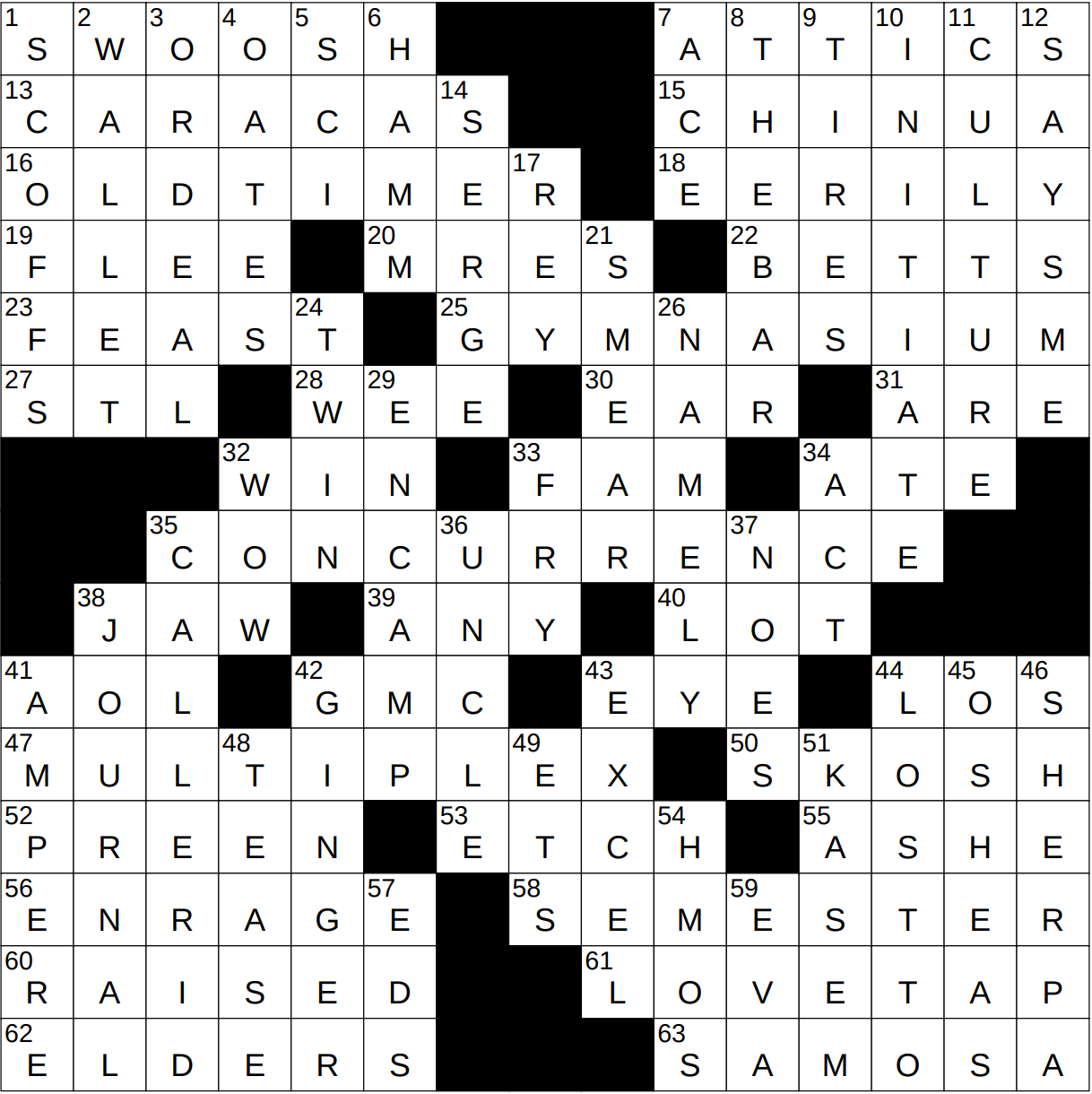 Themed answers are each words that have different meanings in English and in the language specified in the corresponding clue:

1 Iconic sportswear logo that was commissioned for $35 in 1971 : SWOOSH

I remember seeing a lady named Carolyn Davidson on the television show “I’ve Got a Secret”. Davidson created the Nike “swoosh” back in 1971 when she was a design student at Portland State. She did it as freelance work for Blue Ribbon Sports, a local company introducing a new line of athletic footwear. The “swoosh” is taken from the wing of the Greek goddess of victory, Nike. Years later, BRS changed its name to Nike, so I suppose the company should be grateful to Carolyn for both the great design, and a great company name.

7 Stories that can get pretty hot : ATTICS

Caracas is the capital of Venezuela, and is located in the north of the country. The original settlement of Caracas was named by the Spanish using the name of a local indigenous tribe.

Mookie Betts is a professional baseball outfielder from Nashville who was drafted by the Red Sox in 2011. Betts is also a professional bowler, and has competed in the PBA’s World Series of Bowling. He has bowled several perfect (300) games.

25 High school, in Danish … or building for indoor sports, in English : GYMNASIUM

27 The Cards, on scoreboards : STL

Our use of the word “lot” to describe a parcel of land dates back to the 1630s when ownership of the best property in new settlements was decided by castings “lots”.

The telecommunications company that we know today as Verizon was founded in 1983 as Bell Atlantic, and was one of the “Baby Bells” that were formed after the breakup of AT&T. Bell Atlantic merged with fellow Baby Bell NYNEX in 1997, and then merged with GTE in 2000 to form Verizon. The new company name is a portmanteau of “veritas” (“truth” in Latin) and “horizon”.

GMC is a division of General Motors (GM) that was established in 1901 and started out as “GMC Truck”.

58 Vacation, in Swedish … or half of an academic year, in English : SEMESTER

8 Something to pass, legally : THE BAR

“The bar” is a term often used for “the legal profession”. It is a reference to the “bar” that separates spectators from participants in a courtroom.

The verb “to twill” means to weave a cloth (called “twill”) that has a pattern of diagonal parallel ribs.

The basic technology behind caller ID was developed in Athens, Greece by “Ted” Paraskevakos in the late sixties and early seventies. The man should be made a saint …

Scrooge McDuck is a rich uncle of Donald Duck. Donald first hit the screens in 1934, and Uncle Scrooge made his debut performance in 1947.

51 Casey in the National Radio Hall of Fame : KASEM

Not only was Casey Kasem closely associated with the radio show “American Top 40”, but he was also well known for playing the voice of Shaggy Rogers on the “Scooby-Doo” animated series.

English singer Ed Sheeran has appeared as an actor quite a few times. After several cameos in various films, Sheeran had a substantial role playing himself in the excellent 2019 film “Yesterday”. Sheeran chose some novel names for his first three studio albums: “+” (also “Plus”, released in 2011), “x” (also “Multiply”, released in 2014), and “÷” (also “Divide”, released in 2017).

Ed Sullivan’s most famous television role was as host of the “The Ed Sullivan Show”, which ran from 1948 to 1971, a total of 23 years. In that final year, a new set of CBS executives wanted to update the image of the network and announced the cancellation of most of the “old” shows including “The Ed Sullivan Show”. Sullivan was so mad at the decision that he refused to make a “farewell” episode.

Carole King and her longtime partner Gerry Goffin have been writing hit songs since the early sixties. Carole and Gerry had a babysitter, one Eva Narcissus Boyd, who was always bopping around the house in an unusual dance style. They wrote a song about her dance and they called it “The Loco-Motion”. Then they gave it to the babysitter to record. Ms. Boyd chose as a stage name a character in “Uncle Tom’s Cabin” named Little Eva.