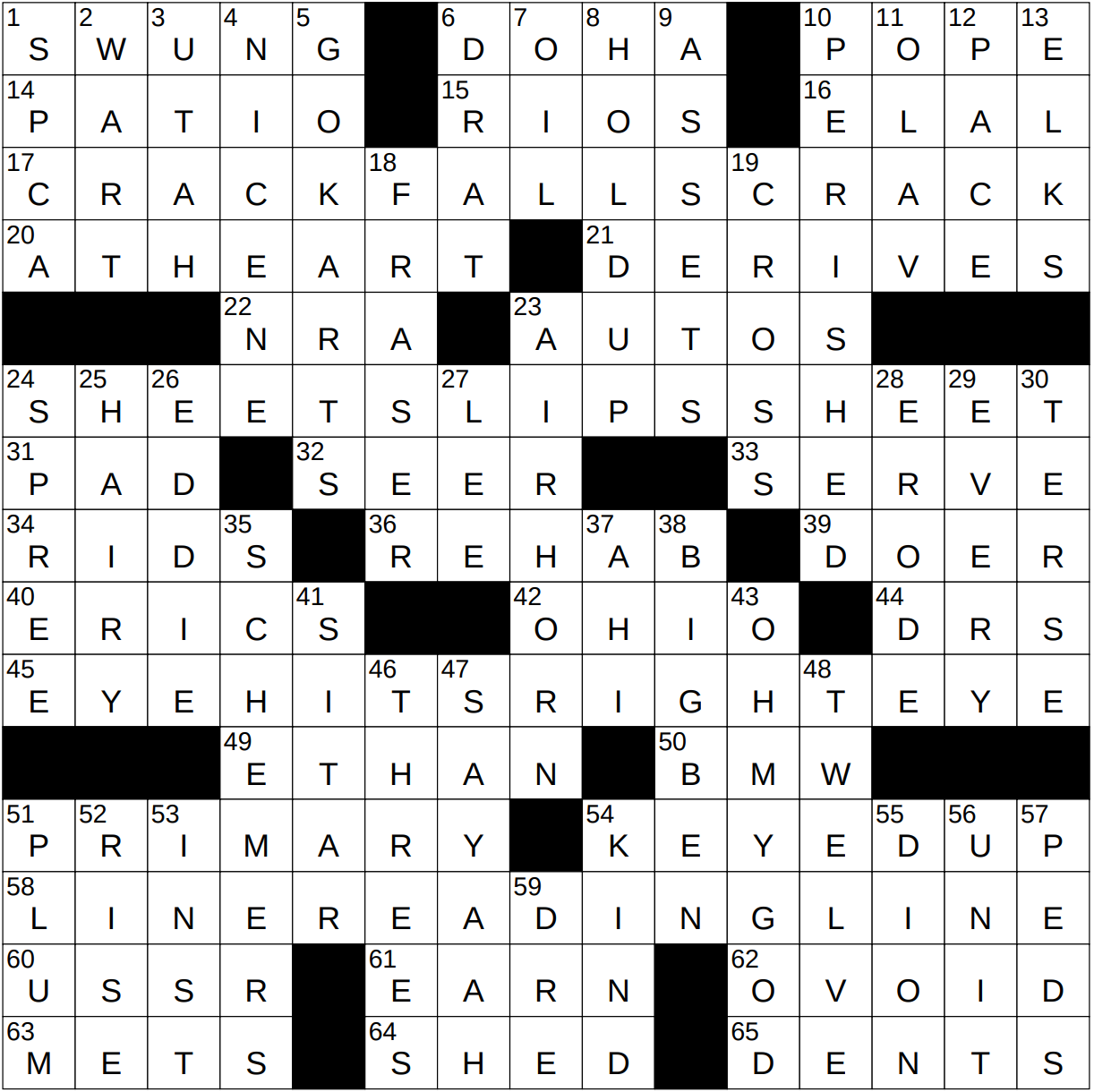 Constructed by: Peter Koetters
Edited by: Will Shortz

Today’s Theme (according to Bill): In the Middle, Literally

Themed answers are common phrases presented LITERALLY in the grid, with one/two word(s) of the phrase placed BETWEEN two occurrences of another word:

The Pope’s ceremonial ring is known as the Ring of the Fisherman. It is named after the first Pope, St. Peter, who was a fisherman. Each Pope gets a new ring specially created for him, with his name written in raised lettering on the ring. The ring was once used as a signet, to seal official documents. After a Pope dies, the ring is crushed, the idea being that no documents can be backdated and forged.

16 Airline that grounds its planes during the Sabbath : EL AL

The Second Amendment of the US Constitution was adopted in 1791 as part of the Bill of Rights. The actual text of the amendment is:

The wording and punctuation in the original text has led to some controversy over the years, some debate over the original intent. That might be an understatement …

23 Jaguars and Impalas, for instance : AUTOS

33 Starting action on a court : SERVE

The US is one of just a few countries that uses primary elections, selections of party candidates by popular vote. In the runup to most national elections outside of the US, political parties select their own candidates. Indeed, primaries weren’t introduced into the US until relatively recently. The first presidential primary took place in 1920, in New Hampshire.

The original Polo Grounds in New York City was built in 1876 and as one might expect, it was used to play polo. The property was leased in 1880 by the New York Metropolitans and was converted into a baseball stadium. Over the years, the stadium was replaced, three times in all, but the “Polo Grounds” name was retained.

A wart is a small eruption on the skin caused by a localized viral infection. Apparently, the most successful treatment is topical use of salicylic acid, with a cure rate of 75%. I think it’s best to try to avoid getting them …

The highest number of National Parks (NPs) in any one state is nine, in California. Alaska comes in second with eight, and Utah comes in third with five. The five NPs in Utah are:

What is known today in the Christian tradition as the Nicene Creed, was originally adopted by the first ecumenical council when it met in 325 AD. The meeting took place in the city of Nicaea, which gave its name to this particular profession of faith. Nicaea is the Greek name of the city that is now called Iznik, and it lies in the northwest of Turkey.

The mild expletive “Holy moly!” is a euphemism for “Holy Moses!”

Slivovitz is plum brandy. The term “slivovitz” comes from the Slavic for “damson plum” and “brandy”, and the beverage is produced and consumed mainly in Slavic regions of central and eastern Europe.