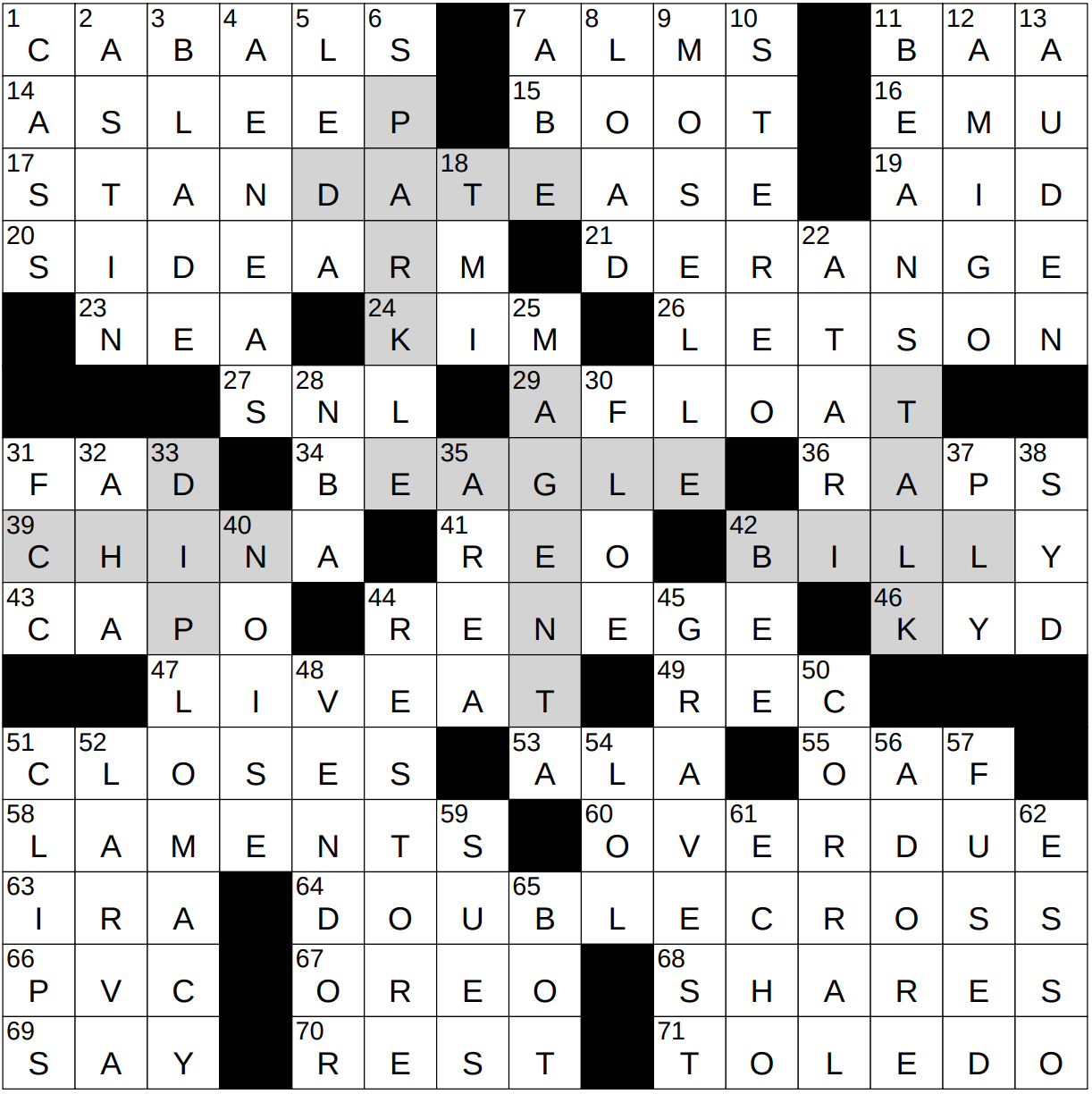 Themed answers each contain a hidden word that often follows “DOUBLE”. And, these hidden words CROSS each other in the grid:

16 Relative of an ostrich : EMU

24 One of the Kardashians : KIM

Kim Kardashian is a socialite and television personality. She was introduced into society by her friend, Paris Hilton. Kardashian’s name first hit the headlines when a homemade sex tape, made by her and singer Ray J, was leaked.

Snoopy is the beagle owned by Charlie Brown in the “Peanuts” comic strip penned by Charles M. Schulz. Schulz told us in the strip that Snoopy has seven siblings: a sister Belle and four brothers, Spike, Andy, Marbles and Olaf. The remaining brother and sister weren’t named in the comic strip, but we did meet Rover and Molly in the 1991 TV special “Snoopy’s Reunion”.

The ceramic known as “porcelain” can be referred to as “china” or “fine china”, as porcelain was developed in China.

The REO Motor Company was founded by Ransom Eli Olds (hence the name REO). The company made cars, trucks and buses, and was in business from 1905 to 1975 in Lansing, Michigan. Among the company’s most famous models were the REO Royale 8 and the REO Flying Cloud.

“Billy Budd, Sailor” is a novella by American author Herman Melville. However, Melville didn’t actually finish “Billy Budd” before he died in 1891. The incomplete manuscript was discovered among the author’s papers in the 1920s, after which scholars restructured the text using Melville’s notes containing revisions and corrections.

44 Fail to keep a promise : RENEGE

To renege on something is to back out of it. It’s a verb commonly used in card games like bridge and whist. A renege is when a player doesn’t follow suit, even though there may be a card of the suit led in his/her hand.

63 One of the Gershwin brothers : IRA

Toledo, Ohio lies in the northwest of the state, at the western end of Lake Erie. Toledo was founded as a result of the prosperity that hit the area when the Miami and Erie Canal was constructed in the 19th century connecting Cincinnati to the Great Lakes. Toledo is known as the Glass City as several glass companies originated there, including Owens Corning and Pilkington North America. There is a large exhibition of glass art at the Toledo Museum of Art.

In Germany, there are thirteen regions that are officially defined as producers of “quality wines”. The best known of these regions is Mosel, which takes its name from the Moselle River. Mosel is the most prestigious region, but only the third largest in terms of production. And most of that production comes from the Riesling grape.

In Spanish, an “amigo” is a male friend, and an “amiga” a female friend.

50 Pen for horses on a ranch : CORRAL

“Corral” is Spanish word describing an enclosure for livestock that we’ve imported into English. Ultimately, the term comes from the Vulgar Latin “currale” meaning “enclosure for carts”, itself coming from “currus”, the Latin for “cart”.

The Esso brand has its roots in the old Standard Oil company as it uses the initial letters of “Standard” and “Oil” (ESS-O). The Esso brand was replaced by Exxon in the US, but ESSO is still used in many other countries.