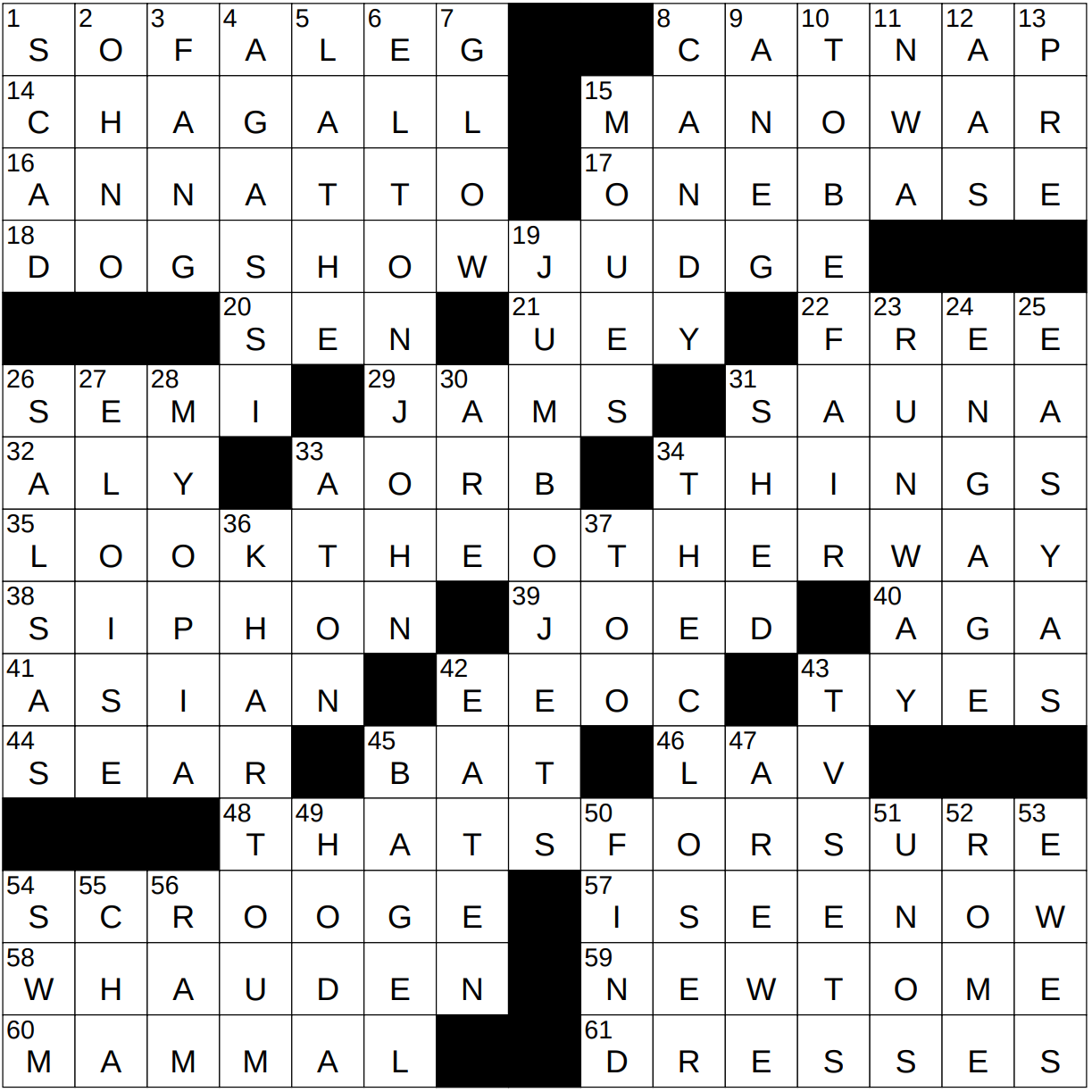 The first patent for a folding bed (later “hide-a-bed”) was issued way back in 1899.

Marc Chagall was a Russian-French artist, one of the most successful of the 20th century. Unlike so many painters, Chagall was able to achieve wealth and fame for his work during his own lifetime. It did help that Chagall lived to a ripe old age though. He passed away in 1985, when he was 97 years young. One of Chagall’s most famous works is the ceiling of the Paris Opera. The new ceiling for the beautiful 19th-century building was commissioned in 1963, and took Chagall a year to complete. Chagall was 77 years old when he worked on the Paris Opera project.

Man o’ War is thought by many to be the greatest thoroughbred racehorse of all time, having won 20 of 21 races in his career just after WWI.

Apparently, Hillary Rodham decided as young as nine years old that she was going to use her name “Rodham” if she were to marry. When Bill Clinton campaigned to become the Democratic candidate for Governor of Arkansas in 1978, his opponent made Rodham’s use of her “maiden” name an issue. The assertion was that Clinton was “married to an ardent feminist, Hillary Rodham, who will certainly be the first First Lady of Arkansas to keep her maiden name.” Clinton won the primary, and the gubernatorial election. When Clinton sought the same office in 1982, Hillary’s use of the Rodham name was still perceived as an issue. That’s when she decided to make a pragmatic choice and change her name to Hillary Rodham Clinton. By the time she decided to run for US president, she was using the name “Hillary Clinton”, and that’s how her name appeared on the primary ballot.

Joe DiMaggio was born not too far from here, in Martinez, California, the son of Italian immigrants. The family moved to San Francisco when Joltin’ Joe was just a baby. Joe’s Dad was a fisherman, and it was his hope that all his sons would follow him into his trade. But Joe always felt sick at the smell of fish, so fishing’s loss was baseball’s gain.

In the nautical world, a tye is a chain or rope that is used to hoist a spar up a mast.

54 One who is mean as the Dickens? : SCROOGE

6 His “Captain Fantastic and the Brown Dirt Cowboy” was the first album to debut at #1 on Billboard : ELTON JOHN

11 Group that had the first hardcore rap album to reach #1 on Billboard : NWA

Those would be batteries.

27 Fictional girl who says “I go to all the weddings in the White and Gold room and I usually stay for the reception” : ELOISE

Actress Kyra Sedgwick is perhaps best known for playing Deputy Chief Johnson, the lead character on the crime drama show “The Closer”. Sedgwick married fellow actor Kevin Bacon in 1988. Sedgwick appeared on a family history show, and discovered that she and her husband are cousins, albeit tenth cousins once removed. I bet that was a surprise …

Khartoum is the capital city of Sudan, and is located at the point where the Blue Nile and White Nile meet.

To polish off is to dispose of completely or rapidly. The verb “to polish off” originated as boxing slang in the 1820s, when it described the act of defeating an opponent quickly and easily. The slang usage was probably a reference to finishing a piece of furniture with a coat of polish.

“Bagel” is a slang term for “zero”, because a bagel has the shape of the number 0.