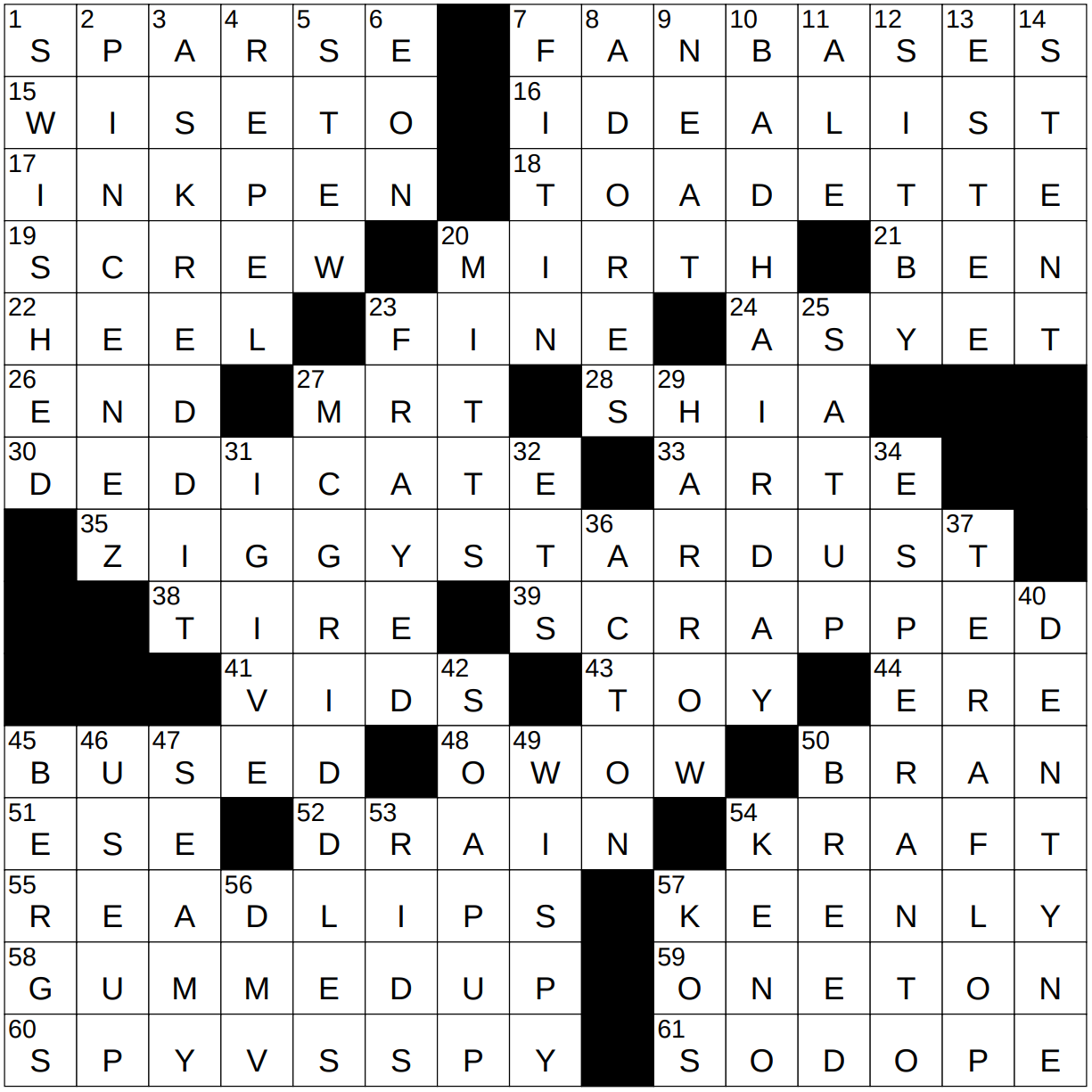 The word “Utopia” was coined by Sir Thomas More in his book “Utopia” published in 1516 to describe an idyllic fictional island in the Atlantic Ocean. More’s use of the name Utopia comes from the Greek “ou” meaning “not” and “topos” meaning “place”. By calling his perfect island “Not Place”, More was apparently making the point that he didn’t think that the ideal could actually exist.

Screws come with slot-heads (-) and Phillips-heads (+). The Phillips-head screw and screwdriver are named for Henry F. Phillips of Portland, Oregon. Phillips didn’t invent the “+” screw head, but as a businessman he was behind its successful implementation.

“David Bowie” was the stage name of English singer David Jones. Bowie adopted the alter ego Ziggy Stardust during his glam rock phase in the 1970s. Sadly, Bowie passed away from liver cancer in early 2016.

54 Producer of many popular singles : KRAFT

In 2012, Kraft foods split into two companies, one specializing in snack foods and the other in grocery items. The grocery company retained the Kraft name, and later merged with Heinz to become Kraft Heinz. The employees of the snack-food company chose the new name of Mondelez themselves. “Mondelez” is a portmanteau of the words for “world” and “delicious” in Romance languages.

Pickup trucks are probably so called because they can be used to “pick up” bulky items from say a store, and then deliver them elsewhere. Here in North America, we call a pickup with four rear wheels (instead of two) a “dually”, a colloquial term. A dually can carry more weight on the rear axle than a regular pickup.

“Spy vs. Spy” is a comic strip that has run in “MAD” magazine continuously since 1961. It was drawn by Antonio Prohias, a refugee from Cuba, until his retirement. The early storyline was very fitting for the times, a statement about the futility of the arms race, detente and the Cold War.

A swish shot is a basketball shot that goes through the hoop without touching the rim or the backboard, and you can hear that “swish” as it just passes through the net, so they tell me …

2 Sort of spectacles not much seen nowadays : PINCE-NEZ

3 Forum that provides material for many BuzzFeed articles : ASK REDDIT

5 Fret about a fricassee? : STEW

A fricassée is a dish containing meat that has been cut up, sautéed and braised, and then served in a white sauce. The French term “fricassée” is thought perhaps to be a combination of the verbs “frire” (to fry) and “casser” (to break into pieces).

Harrows and plows have similar uses, in that they both break up the soil. Plows are used to bring deep soil to the surface, and to bury weeds so that they decay and release nutrients. Harrows break up and smooth just the surface soil, often after plowing.

34 Language with its own “green star” flag : ESPERANTO

Esperanto is an international language specifically constructed to create some level of harmony between people from different parts of the world. It was created in the late 1800s by an ophthalmologist from modern-day Poland. Tens of thousands, and maybe even millions of people speak Esperanto, with some being taught it as a native language from birth.

Dentyne chewing gum was formulated back in 1899 by a druggist in New York called Franklin Canning. He came up with the name of his new gum by combining the words “dental” and “hygiene”.

45 Sights in the Arctic : BERGS

56 Patty and Selma’s workplace on “The Simpsons,” for short : DMV

In “The Simpsons”, Marge Simpson has two older twin sisters. Their full names are Patricia “Patty” Bouvier and Selma Bouvier-Terwilliger-Hutz-McClure-Stu-Simpson. Selma acquired that multiple-barreled name through a string of unsuccessful marriages.