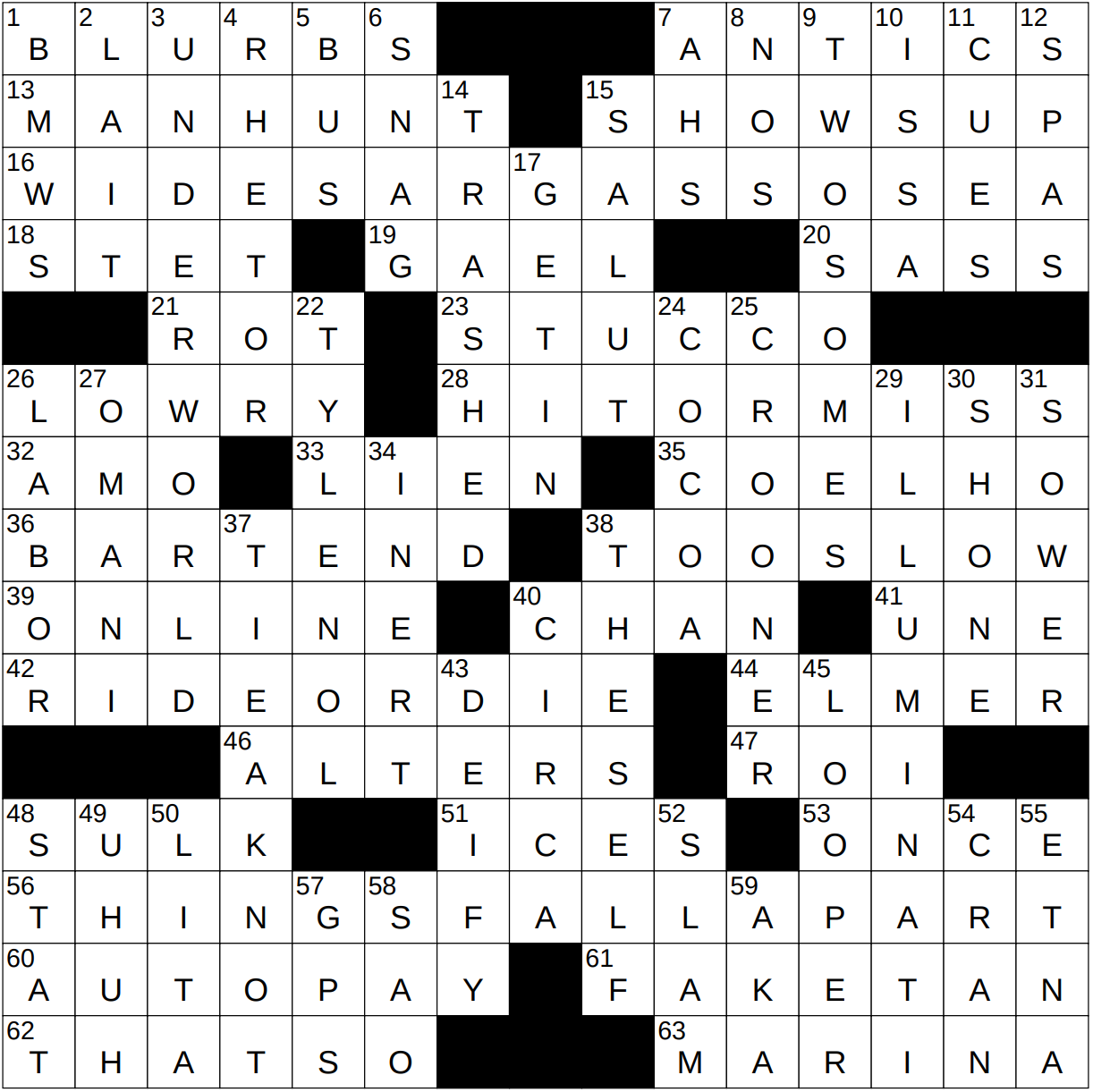 Constructed by: Kanyin Ajayi
Edited by: Will Shortz

Our expression “high jinks”, meaning “prank, frolic”, was once the name of an 18th-century Scottish drinking game, would you believe? A bad score on a dice and you had to take a drink, or do something undignified.

Charlotte Brontë was the eldest of the three Brontë sister authors. Charlotte’s most famous work is the novel “Jane Eyre”, which she published under the pen name Currer Bell. The pen name veiled her gender, but preserved the initials of her real name. After “Jane Eyre” was published, Brontë started to move in the same circles as other successful novelists of the day, including William Makepeace Thackeray and Elizabeth Gaskell. Just two years after Bronte died in her late thirties, it was Gaskell who published the first biography of Charlotte Brontë.

The Scottish Highlands are that part of the country not classified as the Lowlands(!). The Highlands make up the north and west of Scotland.

In Italian, one usually says “ti amo” (I love you) with “grande affetto” (much affection).

35 Paulo who wrote “The Alchemist” : COELHO

Paulo Coelho is a novelist and lyricist from Brazil. He wrote the novel titled “The Alchemist” in 1987, which was destined to become one of the biggest selling books in history. It is also the most translated book written by any living author, and is available in 71 languages.

“Things Fall Apart” is a 1958 novel by Nigerian author Chinua Achebe. It is set in Nigeria and deals with the changes that came with the invasion of Nigeria by Europeans, primarily from Britain. “Things Fall Apart” is regarded today as a seminal work, and is read and studied all over Africa and around the world. It is the most widely read book in the whole of African literature. The title is a quotation from the poem “The Second Coming” by W. B. Yeats.

10 Rae of “The Misadventures of Awkward Black Girl” : ISSA

In French, “salut” means “hi”, and is less formal than “bonjour”. The former term can also be used as a friendly toast.

Tylenol is a pain-relieving drug with the active ingredient acetaminophen (which is known as “paracetamol” outside of the US).

27 Neighbor of a Yemeni : OMANI

Lita Ford was the lead singer for the Runaways. She later became famous for her solo work, although I must admit that I’ve never heard of her outside of crosswords …

The Ocean Spray brand is owned by a cooperative of growers in Plymouth County, Massachusetts, growers of cranberries and grapefruit.

59 The first Black American sorority, in brief : AKA

The Alpha Kappa Alpha sorority was founded in 1908 at Howard University in Washington, D.C. It was the first African-American sorority in the country.