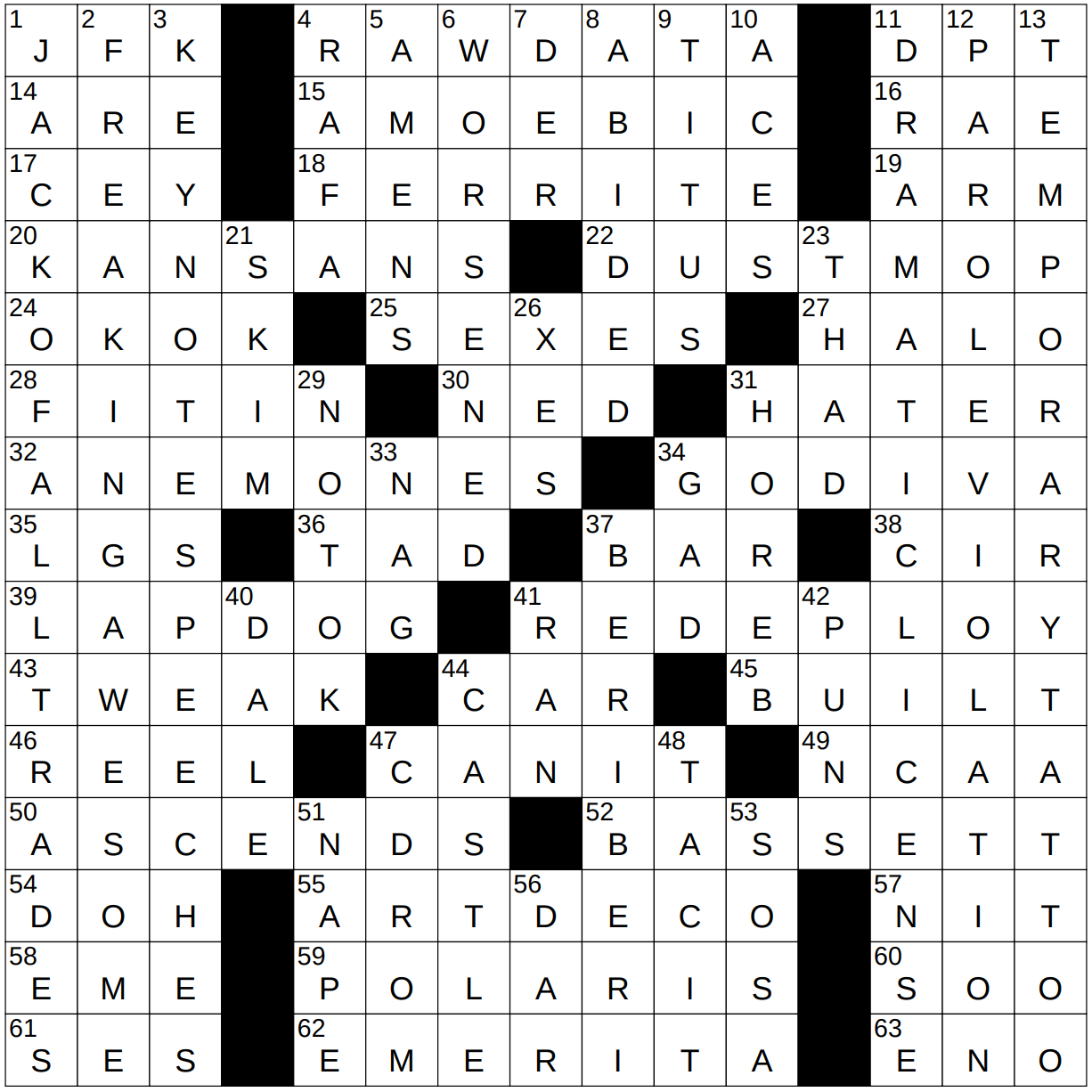 Constructed by: Juliet Corless
Edited by: Will Shortz

President John F. Kennedy’s “We choose to go to the moon” speech was delivered in September 1962 at Rice Stadium in Houston. The aim of the speech was to persuade the American people that the US could take the lead in the Space Race. The general perception was that the Soviet Union was setting the pace, having launched the first satellite (Sputnik) and putting the first man in space (Yuri Gagarin).

Carly Rae Jepsen is a singer/songwriter from Mission, British Columbia. Jepsen got her start on TV’s “Canadian Idol” when she placed third in the show’s fifth season.

Godiva is a brand of chocolates that was founded in Brussels, Belgium in 1926. The founder chose the brand name in honor of the legend of Lady Godiva.

A chocolate truffle is a (delicious) confectionery comprising a chocolate coating surrounded by chocolate that may be coated in cocoa powder or chopped nuts. The confection is named for the edible fungus called a truffle, which has a similar shape.

39 Pomeranian, for one : LAPDOG

Industrialist Henry Ford was born in Michigan, and was the son of an Irish immigrant from County Cork. Ford’s most famous vehicle was the one that revolutionized the industry: the Model T. Ford’s goal with the Model T was to build a car that was simple to drive, and cheap to purchase and repair. The Model T cost $825 in 1908, which isn’t much over $20,000 in today’s money.

Angela Bassett is an actress from New York whose breakthrough role was playing Tina Turner in the 1993 film about the pop icon’s life “What’s Love Got to Do with It”. Bassett married fellow actor Courtney B. Vance in 1997, having first met him while both were studying at Yale School of Drama.

“Malcolm X” is a 1992 biographical film about the African American activist Malcolm X. The movie starred Denzel Washington in the title role and was co-written and directed by Spike Lee.

Back in the 1930s, a manufacturer in Cincinnati produced a doughy compound that was used to clean wallpaper. Twenty years later, school-kids started using the cleaning material as a modeling compound, so the manufacturer reworked the formula, and sold it to local schools. It was given the name “Play-Doh”.

Art Deco is a style of design and architecture of the 1920s that actually had its roots in Belgium and then spread throughout Europe before arriving in North America. Celebrated examples of Art Deco architecture are the magnificent Chrysler Building in New York City completed in 1930, and the GE Building that sits in the middle of New York City’s Rockefeller Center with the address of “30 Rock”.

57 Cause of some head-scratching : NIT

A nit is an egg of a louse.

Phillipa Soo is an actress and singer who is perhaps best known for portraying Elizabeth Schuyler Hamilton, the title character’s wife in the original Broadway production of “Hamilton”.

The keynote is the lowest note in a musical scale, as one might imagine. The term started to be used to mean a leading idea in the late 1700s, and the expression “keynote address” dates back to 1905.

In the Book of Deuteronomy, it is stated that Moses was given the Ten Commandments on Mount Horeb. In other parts of the Bible the same event is described as taking place on Mount Sinai. So, many think that Horeb is an alternative name for Sinai.

To badger is to harass. The verb “to badger” comes from the cruel practice of badger-baiting, which dates back to medieval times. Badger-baiting is a blood sport in which a dog is used as bait for a badger in its den, to draw it out into the open. The den is an artificial structure built to resemble a natural badgers’ den, complete with a tunnel entrance. The dog is sent down the tunnel causing the badger and dog to lock their jaws on each other. The badger and dog are then removed from the den by pulling on the dog’s tail. Horrible …

Thiamine is also known as vitamin B1. A deficiency of thiamine causes the disease known as beriberi, which is a disorder of the nervous system.

In the game of chess, the move known as “castling” involves the king moving two squares towards one of the rooks, and then placing that rook in the square over which the king crossed. It is the only chess move involving two pieces at the same time.