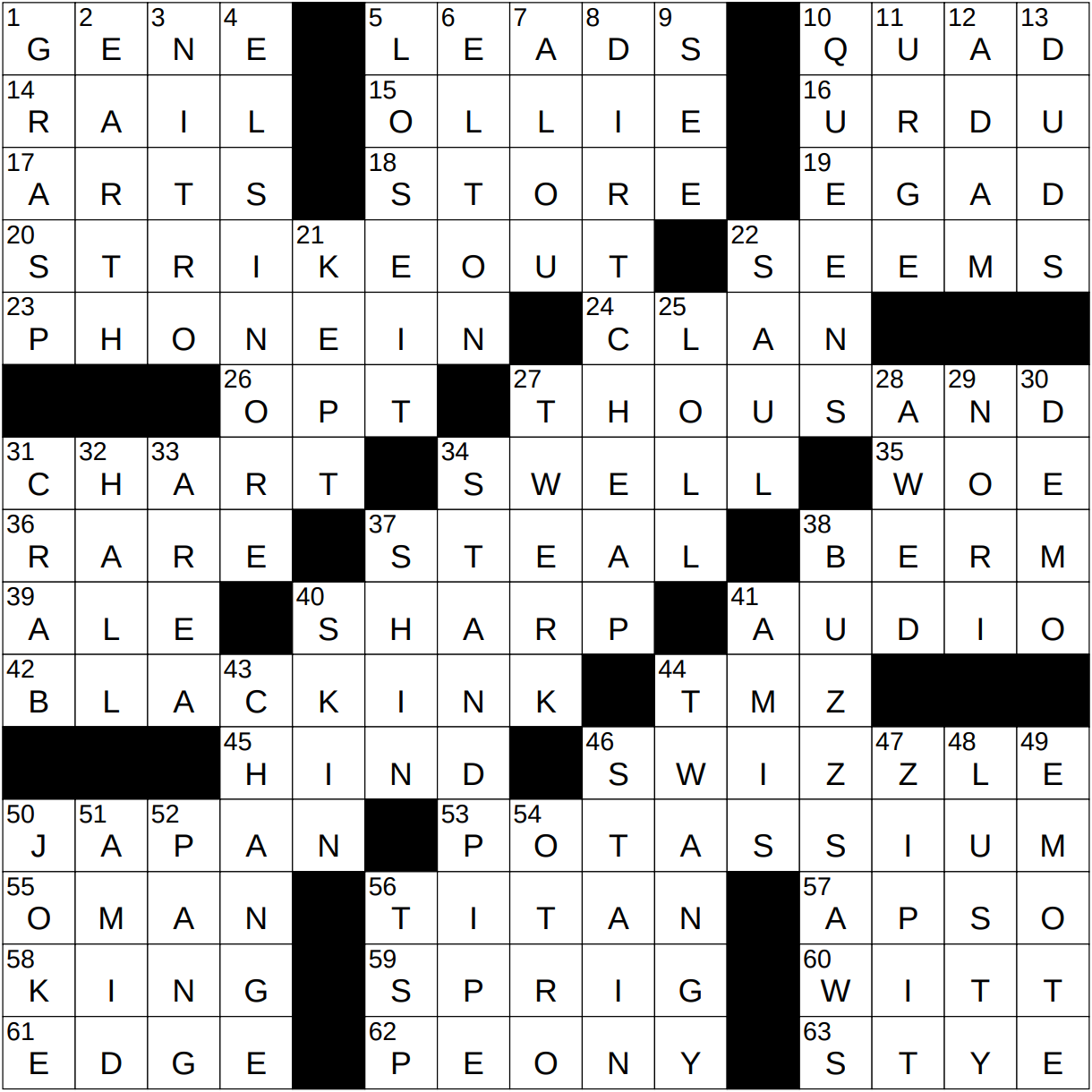 Constructed by: Addison Snell
Edited by: Will Shortz

Today’s Theme (according to Bill): Not OK; a Few Ks

Themed answers are all clued with a “K”:

The activity of skateboarding emerged in California in the fifties. Enthusiasts made their own boards, by attaching roller skates to boards. Back then, skateboarding was referred to as “sidewalk surfing”.

In baseball, the traditional abbreviation used for a strikeout is a letter K (kay).

One K, one grand, one thousand dollars.

A berm is a narrow ledge, one usually at the top or bottom of a slope. The term “berm” is also used as the shoulder of a road in some parts of the United States. It can also describe a physical barrier of some kind. For example, berms can be constructed along a highway to protect those living and working nearby from noise pollution.

MP3 is an audio coding format, the most common format used for music stored on digital audio players. MP3 files are compressed and “lossy”, meaning that some audio information is lost when the file is generated. For this reason, MP3 files are about 1/11 of the size of the equivalent music files found on CD.

44 Online competitor of Us Weekly : TMZ

The 1964 Summer Olympic Games were held in Tokyo, and were the first Olympics held in Asia. The 1940 games had been scheduled for Tokyo, but they were moved to Helsinki after Japan invaded China, and eventually were canceled completely due to WWII. The 1964 Olympics were also the first games in which South Africa was barred due to the apartheid system in sports.

The 2020 Summer Olympics were rescheduled from 2020 to 2021 due to the COVID-19 pandemic. They finally took place in Tokyo. Tokyo first hosted the Olympics in 1964.

53 K, on the periodic table : POTASSIUM

55 Sultanate on the Arabian Sea : OMAN

Qaboos bin Said al Said was Sultan of Oman, until his death in 2020, after coming to power in a coup in 1970 by deposing his own father. Qaboos had no children, and no agreed heir. After his death, the country’s Defense Council opened a letter left by Qaboos that named his successor, his cousin Haitham bin Tariq.

In Britain and Ireland, parsley is listed as one of the four essential herbs. And those would be “parsley, sage, rosemary and thyme”.

Katarina Witt is a retired figure skater who represented her homeland of East Germany, winning Olympic golds in 1984 and 1988. After the reunification of Germany, Witt gained access to the files held on her by the East German secret police. Her file contained 3,000 pages of information about her life since she was eight years old.

61 Unlikely place for a coin flip to land : EDGE

Elsinore is the castle that William Shakespeare used as the setting for his play “Hamlet”. Elsinore is based on the actual Kronborg castle in the Danish city of Helsingør (anglicized as “Elsinore”).

The 1971 Elton John song “Tiny Dancer” was written by John himself, with lyrics by Bernie Taupin. Apparently the “tiny dancer” in the song is a character reminiscent of the young ladies that Taupin met in California in 1970.

Felipe Alou is a former professional baseball player and manager. Alou managed the Montreal Expos from 1992 to 2001, and the San Francisco Giants from 2003 to 2006. Alou was born and raised in the Dominican Republic and came to the US to play for the Giants in 1955. Felipe’s brothers Matty and Jesús followed him to the US, and into Major League baseball.

“Buzz saw” is a term sometimes used for a circular saw, especially one in a sawmill that is dedicated to making crosscuts (cuts across the grain) in cordwood.

A sea change is a change of great significance. The phrase was coined by William Shakespeare in “The Tempest”. The full quotation is:

Full fathom five thy father lies,
Of his bones are coral made,
Those are pearls that were his eyes,
Nothing of him that doth fade,
But doth suffer a sea-change,
into something rich and strange,
Sea-nymphs hourly ring his knell,
Ding-dong.
Hark! now I hear them, ding-dong, bell.

A shaggy dog story is one that rambles, hints at a punchline, and then fails to deliver.