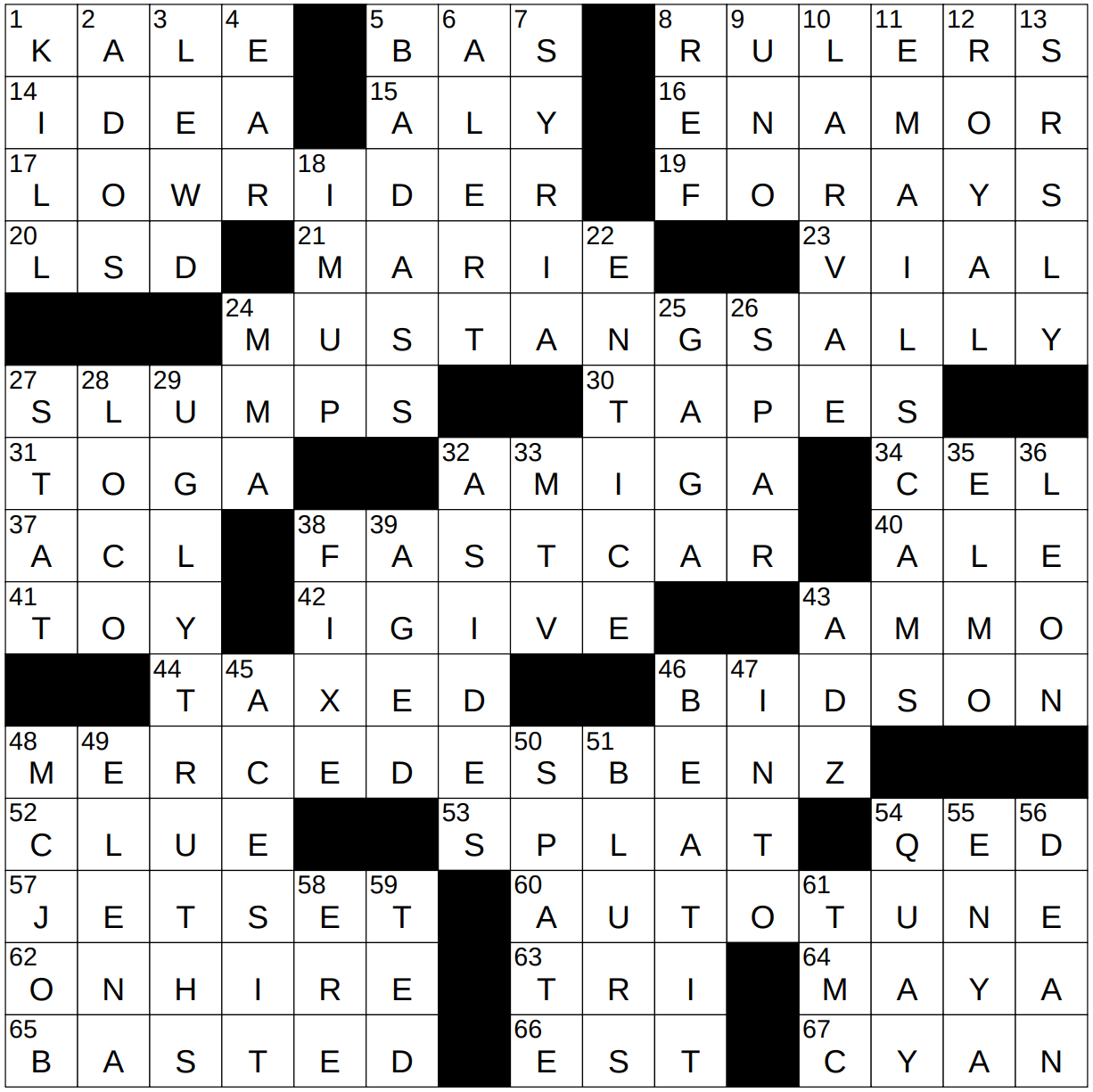 Constructed by: Drew Schmenner
Edited by: Will Shortz

Themed answers are the names of TUNES about AUTOS:

Vitamin K is actually a group of vitamins that are essential to the process of blood coagulation. A form of vitamin K is also involved in photosynthesis in plants, so green leafy vegetables are the best source of the vitamin for humans.

“Low Rider” is a 1975 song written and recorded by the band War. It was used as the theme song for the sitcom “George Lopez”, which ran from 2002 to 2007. Lopez referred to the song as the “Chicano National Anthem”.

20 Inspiration for some psychedelic music : LSD

The term “psychedelic” was coined in 1956 by British-born psychiatrist Humphry Osmond. He proposed the term to describe the effects of taking the drugs LSD and mescaline. He suggested that “psychedelic” be defined as “mind-manifesting”, from the Greek “psyche” (mind) and “delos” (manifest).

“Mustang Sally” is a 1965 song written and recorded by Mack Rice that became famous through a cover version released by Wilson Pickett the following year. Personally, my favorite rendition appears in the 1991 film “The Commitments”, sung by Andrew Strong (when he was just 16 years old).

In Spanish, an “amigo” is a male friend, and an “amiga” a female friend.

“Fast Car” is a 1988 song written and recorded by Tracy Chapman. The song got a big boost that year when she performed it at the Nelson Mandela 70th Birthday Tribute concert broadcast around the world from Wembley Stadium in London.

“Mercedes Benz” is a 1970 song co-written and released by Janis Joplin. It was recorded just three days before Joplin died from a heroin overdose, and released the following year.

The jet set comprises wealthy individuals who frequent the fashionable resorts around the world. The term “jet set” was coined in 1951, and actually predated (slightly) the introduction of jet planes for commuter flights.

64 People that built the Temple of Kukulkan : MAYA

The Mayan civilization held sway in Central America and Mexico from about 350 AD, until the arrival of the Spanish in the 1500s.

The city of Boston, Massachusetts was founded in 1630 by Puritan colonists from England. The area was eventually named for the city of Boston in Lincolnshire, England from where several of the colonists hailed.

7 Turkey is on top of this : SYRIA

The modern state that we know as Syria was established after WWI as a French mandate. Syria was granted independence from France in 1946.

In Spanish, one might request “uno más” (one more) in a “cantina” (canteen, café).

10 Caterpillars and such : LARVAE

Caterpillars are the larval form of butterflies and moths.

Our word “palace” ultimately comes from the name of Rome’s Palatine Hill, “Mons Palatinus” in Latin. The original “palace” was the house of Augustus Caesar, which stood on the Palatine Hill.

“Into the Wild” is an interesting 2007 film directed by Sean Penn that is based on a nonfiction book of the same name by Jon Krakauer. The book and movie tell the true story of Christopher McCandless, a young man who hiked into the Alaskan wilderness with very little food and equipment, seeking an extended period of solitude. After four months alone he was found dead from starvation. At the time of death, he weighed only 67 pounds.

“McJob” is a slang term for a low-paying position that offers little chance for advancement. The term comes from front-line jobs at a McDonald’s fast-food restaurant.

49 Kagan of the Supreme Court : ELENA